Economical cars are the choice of almost everyone of us. In the same way, low price, less maintenance, and low budget is our demand. And indeed, if it could run faster, that would be a favorable advantage. Certainly, they are the ideal city riders. And guess what? Their demand is increasing day by day.

In 1957 Fiat launched 500. It earned fame as one of the most economical cars of that time. But the Fiat 500 was discontinued after 18 years. While 4 million units of this car were sold till that date. Yes, you have read it right.

In 2007, the Fiat 500 was launched once again. It had a similar body style. But a drastically improved drivetrain. The Fiat Trepiuno laid the base for the Fiat 500. Trepiuno is the concept car designed for the production line of 500 in 2004.

A decade back the Fiat 500 was relaunched. But, it is still running in its first generation. Well, whatever it takes; the car should be a fun to drive, nothing else. Not only this, it has earned several awards. Like the International Engine of the Year 2010 award.  It also, has been considered as the Best of What’s New. Along with that, Fiat 500 has earned almost 40 awards which include World’s Most Beautiful Automobile award aswell.

Well, Fiat says that Italian perspective of city cars has been utilized in the design of 500. In 2007, 500 was launched commercially in Italy. Fiat markets this car in more than 100 countries. The assembly lines of the Fiat 500 are situated in Poland and Mexico.

The lowest MSRP of Fiat 500 is $14,995 and has a number of models. Well, the North American models are Pop, Lounge, and Abarth. 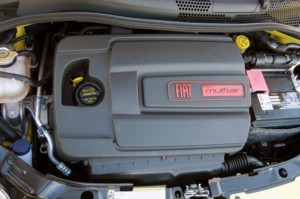 Abarth is offered with the same engine but with slightly different tuning away from North America. It starts from 133 till 200 hp. While the North American Abarth is the fastest model of the Fiat 500.

Outside the North America, Fiat 500 is even offered with diesel drivetrain. As a matter of fact, the drivetrains are powered by 1.3 L Multijet engines with the maximum power of 94 hp rated at 148 lb – ft of torque. 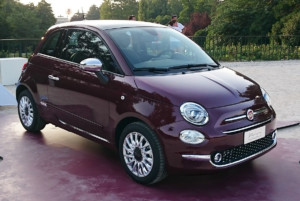 The 500 is pretty cheeky. Fiat 500 is available in hatchback and cabriolet body style. It seems pretty much like the errand runner of 70s. The front has Round headlamps, spherical fog lights, a decent smiling grille and extended side mirrors. Obviously, you do see the windshield, which is much like most of the hatches available nowadays. You get 15 and 16-inch alloy wheels in the Fiat 500. From the classic to sport,y every design is available for the wheels.

There are extraordinary taillights in the rear of the car. The roof falls like the hatches of 70’s. Well, the most amazing thing is that Fiat 500 comes with the 1960 design. That model has been titled as Fiat 500 – 60th. 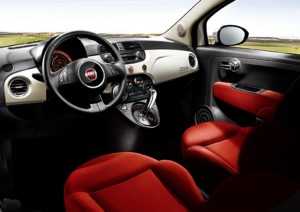 You’ll hit your head on the roof of 500 if you are certainly 6 feet tall. It is a pretty innocent car with modest appearance. The Clothed seats, Beats audio system (optional), a stiffer steering wheel, and a mounted gear lever are some major inclusions in Fiat 500. Also, you won’t hit the passenger next to you as there is a hard armrest available to separate the driver and the passenger. You can’t mingle! The Fiat 500 Abarth gets the sporty interior; like it has ducked seats and leather-wrapped steering wheel.

Well, it’s a city runner. As a matter of fact, the hatchbacks have sufficient amount of space in the trunk to load all your veggies and groceries. Therefore, we ca say that this car has enough space. 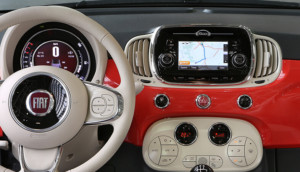 A 5.0-inch touchscreen infotainment system is available in the Fiat 500. Along with that, you get a 7-inch cluster gauge. Uconnect multimedia system supports this system. Not only this, Keyless entry and the Alpine premium audio system are standard features for Fiat 500. Well, that is enough in this price. For this reason, this beauty is always in demand. 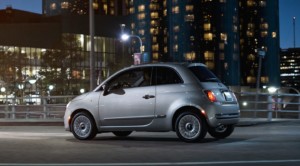 The Fiat 500 is pretty honorable for the safety authorities. The IIHS has awarded this beauty with 5 stars and ranked it as the top pick.  Well, there are around 7 airbags in Fiat 500. And it features the Anti-lock braking system, Electronic stability control, Anti-slip regulator and the hydraulic braking assistant. Besides it, even features park sensor. Similarly, it has a rear view camera. Hence, it won’t be wrong to say that it is a safe-to-drive car. And this is definitely one of its several strengths. Afterall, this car has got some good repute in the market. 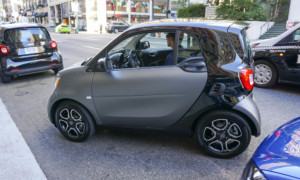 Next, comes the competitors of this car. Well, the Smart Fortwo is the closest competitor of Fiat 500. And above that, it takes the higher rank than this car.

Well, it’s mainly because of the price and the fuel mileage. This Fortwo travels more than Fiat 500. However, Fiat 500 is also giving Fortwo a tough competition.

If you’ve got a small family, then Fiat 500 could be a good pick for you. It has subtle space and is an obedient fella. In conclusion, it is definitely a good car to try. No doubt, it has got several good features that are difficult to find in other cars.