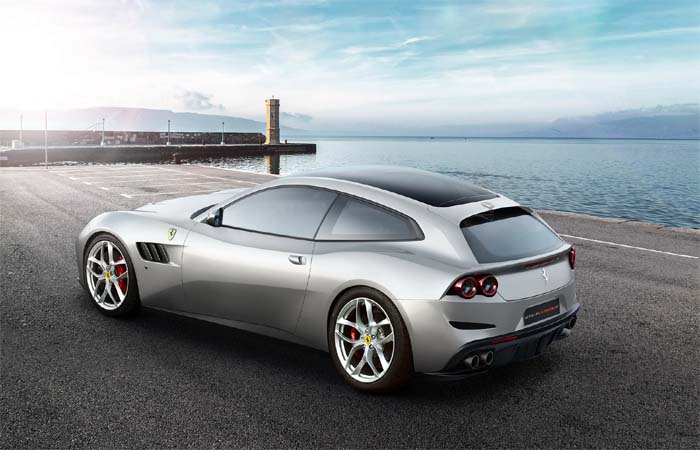 The GTC4 Lusso was introduced during the Geneva Motor Show 2016. It is the successor of the Ferrari FF. The GTC4 Lusso has the similar designing and mechanism. But it has an improved drivetrain. Further, it is not only available with the single powertrain, like its predecessor. It has been divided into two configurations.

The first one is the standard GTC4 Lusso with the majestic V12 engine. While the GTC4 Lusso T has the downsized V8 engine. Indeed the V8 version has been launched to meet the present day competition of the V8 grand tourers.

The GTC4 Lusso is a compact grand touring machine. Though it is not as compact as the hatchback family rides. Instead, it is shooting-brake. Well, do not confuse shooting-brake with the hatchback. We will define them in our exterior section.

Plenty of amenities and configurations are available to add some amount in the base price. And these add-ons are not just limited to the interior of the car. It even includes some hefty bonuses for the exterior.

Since 2017, the GTC4 Lusso T is taken as the base model of the Lusso series. It comes with the 3.8 L V8 Twin Turbo engine. And gets mated on the 7-speed dual clutch. Further, it has 602 horses revving at 561 lb – ft of torque. Well, Lusso T is just new in the squad. And would take some time to adjust in the world of grand touring.

The standard GTC4 Lusso has the V12 monstrous engine. You cannot really forget the sound of its snoring. Well, it is the F140 engine having 681 hp of power at 514 lb – ft of torque. This drivetrain is even mated on the 7-speed automatic transmission.

The performance mechanism is not much different than the FF. The only improvement that we could find was in the driving configuration. The GTC4 Lusso has an improved all – wheel – drive system. The torque vectoring as well as the steering capabilities are better in this car.

The GTC4 Lusso borrows the steering from the F12tdf. It is a conventional sports steering. Sharp turns and quick maneuvering on the road is that part of GTC4 Lusso. Well, handling a GTC4 Lusso on the road is way easier than a number of grand tourers. It is swift through the corners and has agility in treading on every sort of route. The braking capabilities are even enchanting in this car. The carbon ceramic brakes stop Lusso in the blink of an eye.

Well, what about the mileage. GTC4 Lusso is one of the modest V12 cars in the world. It has a combined fuel mileage of 15 mpg. And it is one of the best figures a V12 car can have.

Well, now is the time to separate shooting-brakes from hatchbacks. You must have seen too many hatchbacks moving in the city. Actually, hatchbacks are the ones having no back. And they just smell gas rather than drinking it. But the shooting-brakes are the majestic ones. They are just found roaming on the highways and sleeping in the mansions.

The GTC4 Lusso is shooting-brake. It has beautiful looks. And is full of science. The exterior design actively participates in the aerodynamics of this car. If functions the same way, like the other aerodynamic active bodies. It takes the air in from the lower front to cool the engine. While the bonnet glides the upper air back and on sides. And the roof throws it down to keep the momentum steady.

They are numerous styling options available for the exterior. It has four categories for the paint job. You can choose the colors from the solid, metallic, historical and special categories. The 20-inch alloy wheels are standard. But 5 different designs are available on choice. Well, they all have 5-spokes each, but a varied design. You can even customize the color of the brake caliper.

The styling even includes the amenities for sporty looks. The amenities include black ceramic exhaust pipes, chromed edged front grille, Italian flag and some other options. Well, there is plenty of carbon fiber options available for the GTC4 Lusso. Like you can add the carbon fiber front wings, air-vents, and under-door covers.

The Ferrari GTC4 Lusso has a beautiful interior. The leather is the major component of the interior design. The accent trims, hood, and seats have leather on them. Further, you can choose from a range of colors for the stitching. Along with that, you can even choose the color of the carpet.

The Ferrari GTC4 Lusso gets the 10.25-inch touchscreen infotainment system. The Apple CarPlay is a gift from Ferrari to the GTC4 Lusso. Further, you can have a Hi-Fi system, 128 GB of hard drive and a passenger display system. Well, these technologies up front enhance the credibility of a car.

But cars like Ferrari GTC4 Lusso does not really need such things. As they are completely aromatic with the luxury and comfort.

There had been some complaints about the safety of the Ferrari GTC4 Lusso. Some reports revealed that the initial models of the GTC4 Lusso had defective airbags. They usually did not eject in the case on any impact.

But the recent models of this car have shown some improvement. Still, we are not sure that how much Ferrari has taken care of this issue.

Well, Ferrari offers active safety features for the GTC4 Lusso. They include the dual view front parking camera and the adaptive headlights. While, the cruise control, ABS, and EBD are standard in this car.

The Porsche 911 Turbo is one of the closest competitors of the Ferrari GTC4 Lusso. Well, the 911 gives really a close call to GTC4 Lusso. But still, 911 has more market coverage than the GTC4 Lusso. This is all because of the pricing factor. Along with that, 911 is a safe car than GTC4 Lusso.

If brand matters you most, then GTC4 Lusso is one of the best choices. But if you are conscious about price, then there are other options available as well.

Furthermore, you may also check out our 2018 Ferrari GTC4 Lusso T Review.