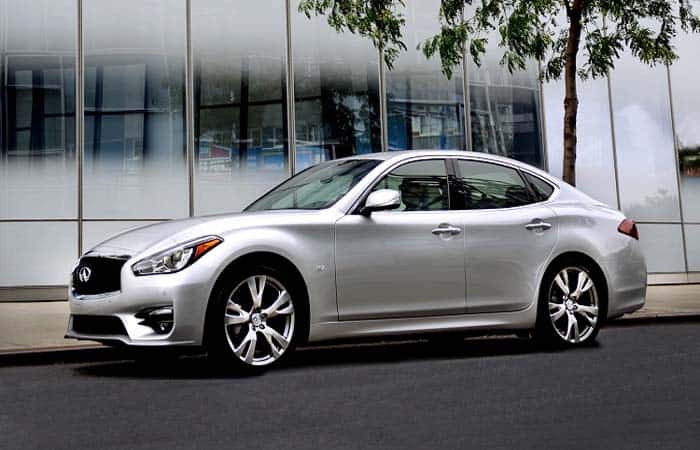 Designing a car is all about the artistic and logical mind. The highly acknowledged cars are backed by excellent designers and engineers. But there are some that are left on the will of nature. And this is what we get in the Infiniti Q series.

Nissan has been spending a lot of budget on developing the Q series. But it is a vague approach to add in a similar drivetrain in three different cars. Even the base level models of the Q series share similar powertrains.

Well, the Infiniti Q70 is a bit different than the other models of this series. It has some more power, beauty, and attitude. Instead, it is the best model of the whole Q series. The life of Q70 began in 2012 when the Infiniti M was discontinued. Actually, this change brought in a new line of products for the Infiniti.

Q70 is also marketed as Nissan Fuga and Cima. They are almost the same cars as this. While Cima is based on the Chinese version of Q70 (the Q70L). Ultimately, Nissan has been successful to market the same car with three different titles. And certainly, it has filled its quota for the sales.

Well, there are 5 different models for the Q70. And all of them are mainly separated on the basis of their mechanics. The base price for Q70 is $50,100. While the finest trim is available for $65,700.

The Q70 begins with the 3.7 L V6 engine. This is the entry trim level of this car. Well, this powertrain has 330 hp of power with 270 lb – ft of torque. Certainly, it is the weakest level of this car. In a way, it could be a good option for the urban rider. As it offers a combined fuel mileage of 22 mpg. Moreover, this trim is available only in rear – wheels – drive. The very next trim is the AWD version of this powertrain. It is rated at the same power levels. But offers 21 mpg as a combined fuel mileage.

Next, we jump to the 5.6 L V8 engine. Commonly, V8s are usually monsters. But the Q70 has a tamed V8. Well, this engine is rated at 420 hp of power with 417 lb – ft of torque. Certainly, it is just 90 hp powerful than the V6 Q70. So what would be the point in getting a V8 that has nothing to offer? This is what Infiniti should think about. As per Infiniti, the V8 Q70 (RWD) is capable of delivering 20 mpg as combined fuel mileage. But our ratings were different. In a series of tests, this car was able to only maneuver till 18 mpg. Though it is just driving on two wheels, but still shaky.

The fourth trim level is the 5.6 L V8 AWD. It is as same as the RWD V8 Q70. But here you get the lowest fuel mileage for the whole Q70 range. In this car, you cannot top city drive in 16 mpg and highway ride in 23 mpg. Though the scripture says the same, the real driving yields a lower result. But to cover this all, Q70 even has the hybrid version.

If you see all of the Infiniti Q series cars from the front, they will all look the same. But a keener look would explain you the difference in these cars.

The Q70 has more aerodynamics than the lower models. Though it looks the same, but it is not the same. The Infiniti Q70 has a wider grille. Even the headlight design is a bit different than the other models. The front bonnet has a close connection with the air differential ability. It has been designed to drag the air away from the car. And the rear lets the air to flow the down force on this car. But overall, the Q70 has been designed for a luxury ride.

The similar designs are even found in Nissan. Certainly, the present production is following the doctrine of the Q70 exterior. But in a way, it even mixes with some concepts of the Nissan GT-R.

Infiniti has tried to indulge some extreme luxury in Q70. But still, it does not match the level of the true luxury rides. Well, there is plenty of leather inside Q70. Leather interior and seating are certainly common. But the ash wood trim from Japan is rare and optional in this car. Well, white ash silver powdered wood trim could even be availed. But that is limited to the upper trim levels only.

The seats are comfortable. Indeed, they offer a pleasant ride for a long drive. Well, this would really not affect the luxury level of this car. As the category of luxury even lets you cool your wine bottle. And icing would be complimentary.

We would not complain about the features of this car. The Infiniti Q70 comes with the 7-inch touchscreen infotainment system. While the one with the navigation is 8-inch in size. The navigation feels like a video game. But still, it is a good improvement with 3-D virtual mapping.

The other features include voice recognition, traffic information, and mobile connectivity. The base trim level gets the basic audio system with 6-speakers. While the upper trims enjoy the Bose audio system with 2 channels and 10 speakers.

The 2015 Infiniti Q70 version was recalled due to a production fault. The fuel pressure sensors were not properly tightened. And this leads to a threat of fuel leakage. But thanks to Infiniti for taking care of this matter.

It was never difficult to find the competitor of the Infiniti Q70. And impressively, the competitor is from the homeland of Infiniti which is even busy in building luxury cars. That is no other than the Lexus GS. The GS has almost the similar interior. But the performing ability of that car is better than Q70.

Well, Q70 would certainly be a good choice if you are an Infiniti lover. Specifically, you love the Infiniti M, then you would surely love the Q70. Otherwise, there are plenty of options available.