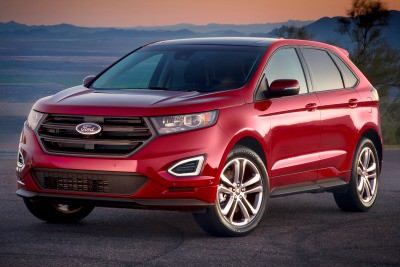 SUVs have been conventionally bigger in size. Relatively they are bigger than the size of your garage as well. But the Ford Edge has relatively compact size which fits on the roads, alleys, streets and your garage.

The Ford Edge was introduced in 2006. That was the first generation of Edge. The car was mainly marketed in the U.S. The performance schedule of then Ford Edge were pretty impressive along with the safety package of the car. The road safety departments of the United States rated Ford Edge to be one of the safest cars on the road. Even certain models of Ford Edge were used to demonstrate the well – designed safety models.

The second generation of Ford Edge has the broader market scope. The Ford Edge was now also marketed in Europe. But only the diesel engine Edge was supplied there. Generally, the models of Ford Edge are SE, SEL, Titanium, and Sport. Ford Edge Sport is the finest model in the series.

The franchise holds 4 models. While there could be a difference in models when going away from the American continent. The whole difference amongst the models lies under the hood of performance and interior styling. The lowest price tag on Ford Edge is of $28,700.

When it comes to the performance of Ford Edge, you would witness sheer power in this Crossover SUV. Ford Edge has the capability of towing up to 2,000 lbs of weight. While Ford Edge is offered with the Cart Sway technology. Which means that Edge can support an additional cart with it.

Ford Edge has a range of gasoline and diesel engines. Least being the four cylinder 2.0 L EcoBoost gasoline engine. Though there is 275 lb – ft of torque available in this engine but it lacks some performance. Especially when climbing up the mountain, the car feels tired and it seems heavy to go up.

While when we come across the 2.7 L twin turbo V6 and the 3.5 L V6, we get good performance. The highway drivers will appreciate the performance of these two machines. The acceleration of 2.7 L is impressive. And the towing capacity of 3.5 L V6 is notable. But both the engines are made unique by Ford. As they are added only in the Titanium and Sport model.

The front – wheel drive is standard in the base models. But among the higher models, the all – wheel – drive is available.

The refined shape of the Ford Edge has the face grille. The grille is common in all the models of the series. To maintain the aerodynamics of the Ford Edge, a tail-end spoiler has been added. The spoiler is found in every model of Ford Edge.

The Ford Edge has good quality material. In the category of SUVs comfortable interior is the fundamental choice of consumers. So, the Ford equipped Edge with subtle equipment. But when we go across the mid-priced models of Edge, there is some reluctance. We do get disappointment from the interior of those models.

Well, the seats of Ford Edge are comfortable. Both the rows of the car are spacious. They provide ample space for long driving. Neither the driver nor the passengers will feel tired after riding in Ford Edge. Besides the general interior, there are a number of add-ons available, which helps in making the interior more beautiful and comfortable. The add-ons include articles like the heated and cooled front seats.

The Ford Edge is spacious enough to carry luggage with you. The trunk has 39.2 cubic feet of space. And if the back row seats are folded, the space increases up to 73.4 cubic feet. As per some comparisons, Ford Edge is among the spacious SUVs.

Ford Edge is one of those SUVs that are high on tech. A number of performance, safety, and durability monitoring tabs are added in the car. Either way, they are a fun for driving. But the real cause for such features is stable and safe driving.

Some features are based on the customs of societies. The Ford offers the MyKey feature in Ford Edge. It is certainly a parental control system. It is really helpful in restricting the speed limits and volume sound of the car. Parents won’t have to worry about their grownup children for being driving Edge recklessly. Even they won’t have to worry that their children might play the music loud. As the performance of the Edge will restrict to the limits prescribed by the parents or the actual driver.

Furthermore, you get the voice command system, known as Ford SYNC 3 System. The music can be played or some other commands can be given via speaking. Rest you get the mobile phone connectivity, Bluetooth and USB ports are available.

The more money you add, the more features you get. The features increase in every model with an increase in the price. That’s why Ford Edge Sport has the highest features in the range.

The Jeep Grand Cherokee has impressive performance figures but they resemble our Ford Edge. This Crossover SUV has almost the similar price as that of Ford Edge. All that is a big difference are the manufacturers that are different.

Ford Edge has been prescribed as a good family car. As it has one of the best safety measure which brings it under the label of Family car. In such a minimal price, it is definitely a good SUV.