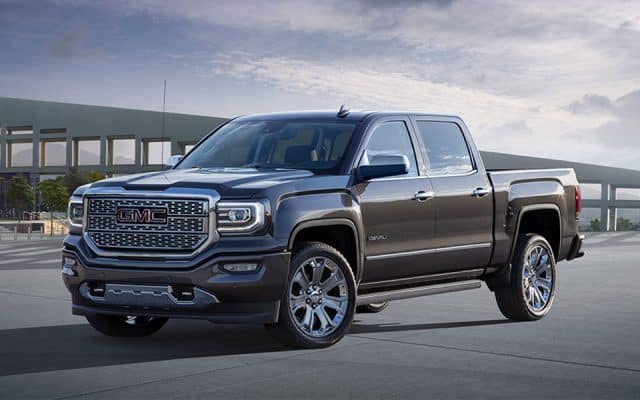 General Motors has introduced a similar technology under the banner of the two manufacturers. The GMC and the Chevrolet, they both have a similar vehicle, in terms of everything. All that differs is the company logos printed on the trucks.

The series is launched with the title Sierra under the banner of GMC. While in the Chevrolet, it is launched as Silverado. The GMC Sierra 1500 is considered to be the successor of GMC C/K. However, both the trucks, the Silverado and Sierra, series do not totally resemble each other. There are slight differences available in the design, powertrain, and interior.

Technology is one of the major aspects in the cars and trucks today. Today’s GMC Sierra series share the high-tech features. Precisely, it is the requirement of the market, as the competition nowadays is not just judged on the basis of the performance. It even requires high tech features. The GMC Sierra 1500 is priced as low as $27,900.

As per the specifications of GMC, Sierra 1500 has a limit of 5,000 to 9,400 lbs of towing. But the practiced example showed that it can tow 12,000 lbs of weight. The performance schedules further include a 4 × 4 driving motor for beneficial off road driving.

Sierra is available in all – wheel drive format. While the basic offer is for the front – wheel – drive only.

While when the same transmission of six – speed was added to the 6.2 L V8, the performance was different. The engine with 6 – speed reached 62 mph with 5.4 seconds. And the engine with the new 8 – speed automatic took 5.6 seconds to reach there.

The present day Sierra 1500 has a capacity to tow more amount of weight. And the beauty is that it is even an eco – friendly truck. The EcoTec3 engines save the fuel. The test drives reveal that Sierra 1500 is almost 3 mpg better in EPA than the previous models.

Sierra 1500 is now a fun to drive. The steer wheel is smoother. There is no roughness while steering the truck over country roads.

Though there are not much differences available in the Chevrolet Silverado and the GMC Sierra 1500. Especially in the terms of looks.

But we get some differences in the shape of the grille, LEDs, and aerodynamic cuts. Indeed the heavy vehicles slightly differ each other.

Some truckers found it as a catch in the GMC Sierra 1500. As they were looking for a long – box in the crew cab model. But it is not available there.

The grille is different in every model of the series. The Sierra 1500 gets the advanced GMC signature LEDs in the headlight and the taillight.

Theoretically, there is much space in the Sierra 1500 cabs. And no doubt the front row has practically subtle space. Even driving Sierra 1500 is a fun.

But when we go back in the standard – box cabs, there is certainly less space then. The increased size of the box reduced the space in the back row of the cab.

Well, that’s just the size when we come across the quietness in the truck, then it’s remarkable. The doors and windshields are looped with seals which help in reducing the outside noise. And when it comes to the seating, then they are pretty comfortable. Precisely Sierra 1500 is a comfortable companion for long distances.

The infotainment system of Sierra 1500 has Apple CarPlay and Android Auto Phone. It is provided with an 8” touchscreen for display. Further, it has the 4G LTE support and internet radio connectivity features.

The trucks and SUVs have much to do with the safety. As such vehicles are to be mainly used for off – road destinations, hence they require more safety. The GMC Sierra 1500 follows the exactly prescribed safety scripture. But it even allows some more safety packages. They include the Hill Indicators which help in breaking, Forward Collision Alert and IntelliBeam headlamp automatic power.

In short, GMC Sierra 1500 is relatively a heavier product for the roads. But the advanced technology makes it a fuel saving monster.