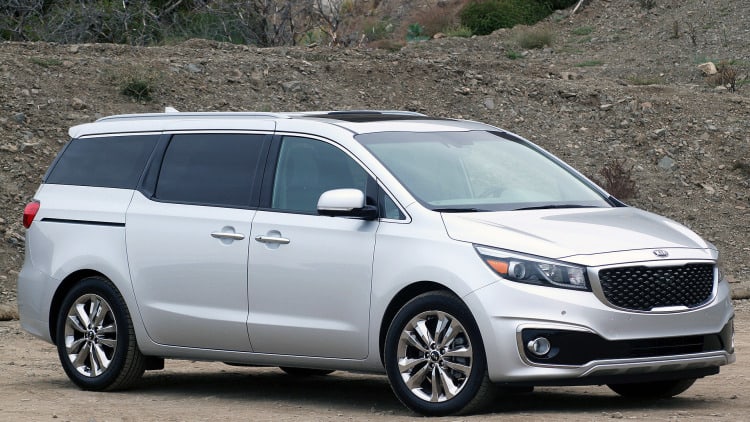 The 2017 Kia Sedona, also known as Kia Carnival is a Minivan with sporty chassis. Sedona was manufactured as it’s sibling by Hyundai known as Entourage. The first generation of the franchise began in late 1998. While the present day generation is the third generation of Sedona.

The first generation went on sale in 2002 and ended up in 2005. The overall remarks about Sedona were not impressive. And even there were a number of features that were missing in its first generation. But with time Kia eradicated such issues.

The present day generation (third generation) was introduced in 2014, with its production beginning in 2015. The previous generations of Sedona have relatively no further modeling. But the present day model has five models; Sedona L, Sedona LX, Sedona EX, Sedona SX and Sedona Limited. The model lineup is different as per the continents. Like in Australia, the modelingng is Sedona S, Sedona Si, Sedona SLi, and Sedona Platinum. The starting price of the franchise is around $26,800.

The model L of Sedona is considered as to be the basic model. And the particulars of the model even reveal that. It has a basic driveline with the basic driver integrative features.

The drivetrain of Kia Sedona is not like the basic minivans. It has a sporty chassis and even a V6 engine in line. The market preferable chassis are both. The 2.2 L diesel engine has much to do with the errand runners. It has a nominal driveline with modest mileage that makes an EPA up to 25 mpg.

When we get to the fun drivers, they would prefer the 3.3 L V6 gasoline engine. Here Sedona is a bit more consumer of fuel, but it’s a power machine. If you prefer to run your family at speed, you’d love the V6.

When we come to the handling, which is of course a major inclusion in errand rides, then it is pretty good. The steering wheel has enough weight to steer it timely. Even the road grip and steering interval is almost perfect. Rather it is better than a number of other minivans. But still it is a heavy vehicle to drive.

But not to forget, there are a number of other minivans even available that has made the steering much more a fun for minivan drivers.

The 3.6 L V6 is a standard drivetrain for the US. The 2.2 L diesel engine is available for the European and Asian markets. The acceleration tested for both the minivans is quite higher than a number of consumer oriented minivans. Even a number of competitors of Sedona lack this fact. But it’s a minivan, not a track racer. Acceleration and speed doesn’t matter to a number of minivan consumers.

Usually the minivans don’t get much of the designing. But Kia Sedona is precisely a unique among them. Although Kia has modified the looks of a number of its cars since the early 21st century. Whether you go for anything in Kia, you will get a charming exterior.

The most charming is its grille. The signature tiger grille is a nice facelift for Sedona. Along with that the signature LED lamps and the 19” wheels add more fuel in the charm of Sedona.

Though the drag coefficient and air friction is not much bothering for minivans. But Kia has targeted a safe driving exterior. Sedona is lower than a number of minivans in market.

Practically you can fit in 8 passengers in Sedona. As compared to its previous generations, the present day Sedona is pretty much comfortable. The tests revealed that Sedona is comfortable to ride when going for a long journey.

The dashboard articles are not much eye catchy. But when we go to the steering panel, seats and hinges, you’d get quality products. These are mainly included in luxury vehicles. But you are getting them in a minivan.

Even the rear seats of Sedona are higher in quality than the expectations of a number of consumers. They are pretty luxurious for a minivan. In the Sedona Limited the second row seats are movable which allow more space for cargo. This has been named as Lounge panel.

Some articles are pretty much different from rest of the minivans. And even a bit weird as well. The console between the front and back row is normally movable. But in case of Sedona it is fixed, which allows no permission to move between the seats or cleaning.

The cargo space in Sedona is bit lacking. We have here 140 cubic feet of space which is almost 10 cubic feet lesser than its competitor. But the passenger spacing is higher than other minivans. But there are even bigger vans as well in the rage. Sedona offers 158 cubic feet for passengers.

The Android Auto, Apple CarPlay and SiriusXM is optional in some models. While these are available in higher models.

Kia Sedona has been recommended as one of the safest cars. The minivan has earned 5 stars in terms of safety and security. And the best thing about Sedona is that, Kia has not compromised on safety. They have made all the safety and security features confirmed on every model, besides Vehicle Stability Management (VSM). It is only available in only higher models.

The challenging Sedona gets the competition from Toyota Sienna. It even comes with almost similar performance schedules. And the performance tests showed that Sienna is a bit faster than Sedona. Though we have a good competitor in line.