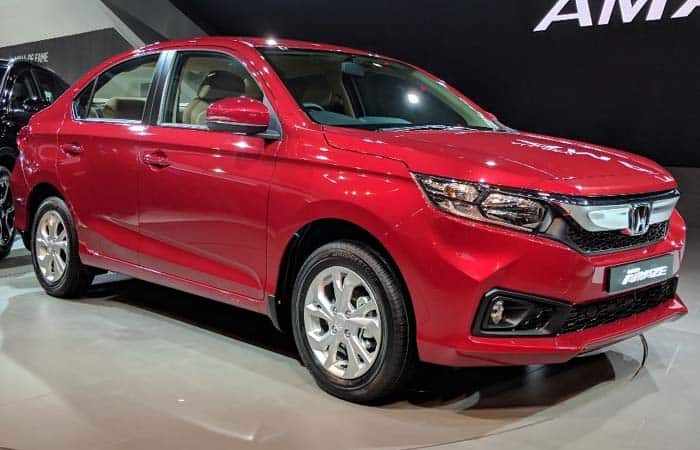 The tradition of economic cars is still going on. A lot of classes in the developing countries prefer buying the cars that are big enough to fit in their all family members and have a cheaper maintenance cost. Well, this is what you could find in the cars like the Honda Amaze.

Well, by its title it would not really amaze you. But the concept my put in some suspicion. The Amaze is totally based on the Honda Brio. But the only difference is that it is a sedan, not a hatchback. And really for sure, this is one of the reasons this car gets some space in the market. Most of the buyers would prefer to go for a decent hatchback based sedan that is not hefty on their budget.

The first generation of this car came out in 2013. And by 2015 the Amaze was one of the highly grossing cars for Honda from the South Asian market. Up till then, more than 7000 copies of the Amaze were sold. While the second generation came out just recently in 2018.

Well, the Honda Amaze really amazed us with its price. You can get the base version for $8,740 only. And there are not too many upgrades available to enhance the cosmetics and interior of the car. Precisely, the price might just roll a hundred dollar up. Or maybe just a few cents.

Well, the Honda Amaze or the Honda City, they are pretty much same. The only difference is the base 1.2 L 4-cylinder gasoline engine which is included in Amaze.

This is the 89 hp engine with 84 lb-ft of torque. You would certainly find such an engine with the turbocharger in the hot-hatches. But in the South Asian and other developing markets, such engines are usually found in entry-level sedans. Well, you cannot complain about the performance, as this machine is not meant for the performance. While the maintenance cost and the fuel mileage is pretty economical. The gasoline Amaze can give up to 30 mpg combined fuel mileage.

The next entity that we get is the 1.5 L 4-cylinder diesel turbocharged engine. Yeah, here you can expect some performance. But that would not even bounce you up to a marvelous extent. Well, this is the Honda’s favorite Earth Dream engine with lower CO2 emission. While that is still hefty against the Euro-spec emission standards.

The diesel Amaze rolled from 0-62 mph in 14.1 seconds. Well, that certainly lied about our expectations. And 100 mph is her top score. While the handling abilities are just fine. She can dwell and maneuver pretty decently, but you cannot compare it to a lot of other entry-level sedans. The Amaze is just built to provide an economical city rides.

The Honda Amaze has the basic exterior design with just some outdated kind of cosmetics. The halogen lamps, steel wheels, and the all-weather base tires are the standard equipment. While the LED-based headlamps are awaited for the upcoming generation. The frontal impression is just decent with nothing elegant or sporty. While the rear is just like a hatchback extended with a trunk. And the aerodynamic application is subtle to keep this car going.

Well, the Amaze does not have a lengthy structure. This is a subcompact sedan with the hatchback-like measurements.

The interior design is even just at par with the exterior structure. The fabric cloth seats, three-spoke steering wheel, and beige accented trim is standard for all the versions. Well, the spacing in the front row is fine. But the rear row does not offer too much space. The rear passengers should not be more than 5-10” or they would hit their head in the rood. And would hammer their knees in the front seats. Further, the trunk has enough space to carry the monthly groceries. Precisely, the Honda Amaze has been designed for small families that need a car for their daily errands.

We tried to find the touchscreen available for this car. But that is an aftermarket feature that Honda offers. And that is far more costly than what could be purchased from the local markets. Well, there is nothing fascinating for us in the Honda Amaze. It is just a standard car with the radio and music system, Bluetooth streaming, telephony, speakers and 3D driver’s cluster display. Further, there is nothing else that Honda offers with the Amaze.

The obvious safety is included in the Honda Amaze. An obvious safety like the seat belts for the front row guys and the airbags as well for the front row. While the rear row needs nothing to keep themselves safe. Well, you do not have to worry about the rear row guys as the Amaze gets the safety cage, which reduces the impact of the collision. We told a lot of time that what does a safety cage means. Certainly, it does not mean a cage for a flesh-eating monkey.

Besides the passive safety, the Amaze includes ABS and the EBD. And this all folk you could get in the active safety panel for this car.

Well, the Honda Amaze gets the competition from Hyundai Xcent. And this competition is based on market response. They are strong market competitors in some regions. But when it comes to the performance and design, the Xcent is far better than the Amaze.

Going for Amaze is not a bad option. Especially when the budget is your major priority. But if you need something passionate and thrilling than you would have to compromise with the budget.