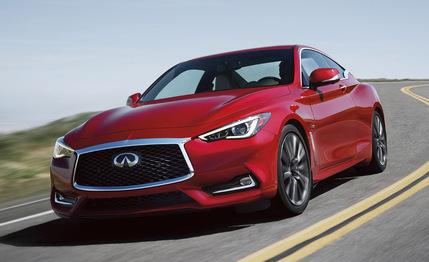 Infiniti is particularly meant to produce the luxurious cars. This branch of Nissan has been notable among the North American drivers. There are a number of cars that has been created by Infiniti which earned a good market reception.

In the preset days, Infiniti has revised one of its cars. It is the Infiniti Q60, which has entered into its second generation. Q60 was initially introduced in 2013 as a coupe and convertible for the year 2014. It shared the platform with the Nissan 370Z (Fairlady). Q60 is considered to the successor of Infiniti G, which was also available in coupe and convertible body styles.

So here we are in 2017, with the Infiniti Q60, starting from $38,950 only. The amazingly designed Q60 has too much to offer to its drivers and passengers.

The available models for the car are Q60 Coupe, Q60 Red Sport 400 and Exclusive Neiman Marcus Edition (up to 50 cars only). The models are further divided on the basis of performance, exterior, interior and features of the car.

When we hoop into the 3.0 L Q60, we meet the immensely powerful V6 engine. It has been solely crafted by Nissan for Infiniti. Well, the engine is offered in both the configuration, RWD and AWD. The V6 engine has 300 horses tuned @ 295 lb – ft of torque. That is the powerful standard drivetrain for the Infiniti Q60.

Besides the conventional V6, we get the twin-turbo engine in the menu of Q60. The Q60 Red Sport 400 comes with a 3.0 L V6 twin-turbo engine. The title of the model has been based on the amount of horses it has. This twin-turbo V6 has 399 horses (rounded-off to 400) @ 350 lb – ft of torque. This is the most powerful engine available in the franchise. This drivetrain is also available in both the configurations.

The same engine will be available for the Exclusive Neiman Marcus Edition. The version will only be available in AWD configuration.

Well, it’s more of the engine performance, let’s get to some handling of the car. The Q60 was tested on every sort of surface including the rough curvy mountain tracks, the country paths, and the dirt filled bumpy road. The shocks of the car didn’t let the pressure come up. Though the shocks seemed stiffer initially, but the way they balanced the car was amazing.

The exterior of the Infiniti Q60 has been revised as compared to its last generation. Although there is not much gap available in both the generation, but still it has received some good amount of revisions. The first seeable change is the height of the car. The height for the present day Q60 has been dropped. Secondly, the width of the car has been increased. An Active Grille Shutter is available in the V6 models of the car.

The exterior design improves up the order. The lower trims get the standard 19-inch alloy wheels with the higher trim (sports models) have Staggered Alloy Wheels.

Scientifically, Q60’s exterior design has everything that a car requires to support its performance. The lowering of the car is certainly drag coefficient stabilizer. While the whole design of the car is an air friction reducer. The exterior allows more space to the performance.

The luxury sports cars need to have the luxurious and comfortable interior. The Infiniti Q60 is full of luxury and comfort. Especially the premium trims of the franchise are exclusively coated with luxury. There is a rich amount of leather and aluminum accent available in the interior of the car.

The Sport versions are provided with more luxury as compared to the rest of the models. Such as the Semi – aniline leather appointed sports seats and aluminum accented pedals.

The Infiniti Q60 features a number of functionalities. The driving features of the car contains the Direct Adaptive Steering, Drive Mode Selector, Hydraulic Electronic Rack – and – Pinion Power Steering System, Dynamic Digital Suspension and some other.

The Infiniti gets an 8-inch touch screen infotainment system. The system supports the sound system, 4-G, SiriusXM® Satellite Radio and mobile connectivity. There are a number of after shop features available for Q60 as well.

The luxury sports cars need to maintain a good check on their safety. The Infiniti has a reasonable past in terms of safety of its vehicles. The Q60 is also a safe car for driving. While in the active safety package, Q60 has Radar Sensors, Forward Emergency Braking System, Forward Collision Warning System and Blind Spot Warning System. There are some other features available as well but they differ on the basis of the model.

The Audi A5 is the finest competitor of Infiniti Q60. The performance chart of both the vehicles differ a lot. Besides the 2.0 L drivetrain, rest of the schedule is different. But the exterior and interior design of Audi A5 leads the Infiniti Q60.

Getting towards the luxury sports is easier than to choose a best luxury sports car. The revised model of Infiniti Q60 deserves a chance.