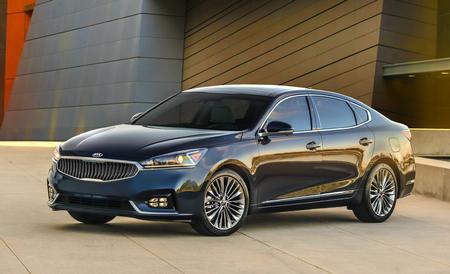 The year 2017 has been a Launchpad for a number of automobile manufacturers. A range of successful cars has been relaunched in this year.

In South Korea, the car comes as Kia K7. The car was introduced in 2010. However, it oractically came to the North America in 2013. For the North American markets, the Cadenza resembled Hyundai Azera. Besides the American markets, the second generation of the car resembled Hyundai Aslan. A lot of resemblance could be seen in the models of Kia and Hyundai. For instance, the Kia Optima resembles Hyundai Sonata. That’s how both the companies are siblings to each other.

The word Cadenza is taken from the Italian language. It means melody or harmonic configuration. Cadenza is mainly a passage of Italian and Latin music. It emphasizes on the concept of solo performances. A similar has been filled in Kia Cadenza. It has been crafted in a way to lead the rest.

Kia Cadenza is starting from $31,990. There are three models in the franchise. They are Cadenza Premium, Technology and Limited. The generation has gone through redesigning by the end of the Year 2016. The models for the year 2017 have been made available for market.

A 3.3 L V6 engine is provided in the Kia Cadenza. The engine is standard in all the models of the franchise. To enhance the mileage of the car, Gasoline Direct Injection (GDI) has been utilized. According to the specification manual of Kia Cadenza, it has a Sportmatic transmission system. Further, it incorporates Smart Shift and a Drive feature. The drivetrain utilizes the application of DCVVT (Dual – Continuous Variable Valve Timing) which has helped in presenting a competitive mileage.

With a V6 engine, you certainly don’t expect a mileage of 23 mpg (combined). But a sheer power is expected from a V6 engine, which has been found lacking in Cadenza. The previous generation of the car has much better response.

While performing the acceleration tests, Kia Cadenza was found slower than the last generation. Cadenza for the model year 2016 was tested alongside the present one. The present day Cadenza showed a lag of 2 – 3 seconds while reaching the 0 – 62 mph mark. We certainly can protest for a lagging performance of Cadenza.

But for the competition, this luxury sedan has much more power as compared to the rest in the market. On the basis of its performance, the car has been ranked amid 5 – 2nd positions on the chart.

The design of the car itself depicts luxury. It begins with the traditional Tiger Grille of Kia. The Tiger Grille could hardly be found on the base model of the car. Then it jumps toward the iconic whale-eye shaped headlamps. The base model has the projector beam headlights, while the top trims have the LED headlamps. To support the projection of the projector beam, an additional halogen front fog lights have been added into the base model. The top notch gets the LED fog lights.

The models of Cadenza are mainly distinguished on the basis of its exterior. The more you go up, the luxurious outfit you get. Whether it’s the base model or the higher trim, luxury is depicted from all of them. There was a while when it seemed a bit odd that Kia is working on luxury cars. But not it has become a habit to have such beautiful looking cars from this Korean brand.

Kia has narrated that the body steel of Cadenza is dent – resistant. It’s unlike the other cars from Hyundai or Kia. The design of the car even depicted a change in the orientation of the Tiger Grille. Previously it resided up till the tip of the headlights, in almost a rectangular dimension. Now, the shape of the grille has been redesigned, making it to resemble a tiger roaring.

Luxury wasn’t that much expected in Cadenza. It was all the observation from the past models from this brand. But cadenza has changed the appearance of Kia cars. It is rich in luxury and has the bold components. This is usually present in the luxury cars from Germans. Rather it was considered that Cadenza would be an entry level luxury sedan.

Leather seats, wood grained dash-board and door paneling, and faux suede roof are the eloquent expressions from Cadenza’s interior. The rear seats are quite spacious, making a room for 3 passengers. As compared to the first generation, there is a half inch more space in the back. Certainly, Kia has targeted families who want more space in the back.

7” touchscreen infotainment system with Android Auto™ and Apple CarPlay™ is available only in the base model of the car. The higher trims come with an 8” touchscreen. Navigation is standard in the higher trims, while it is optional for the Cadenza Premium.

Cadenza employs all the necessary equipment that is essential for road safety. It has ample amount of airbags and the seats provide safety in case of any unwanted incident. The mechanism of the car incorporates Anti – Lock Braking System (ABS). Vehicles Stability Management (VSM), Electronic Stability Control (ESC), Traction Control System (TCS) and a number of features are available as driving assistance.

If you are planning to jump into a powerful, good looking and comfortable sedan, then Cadenza could be a good choice.