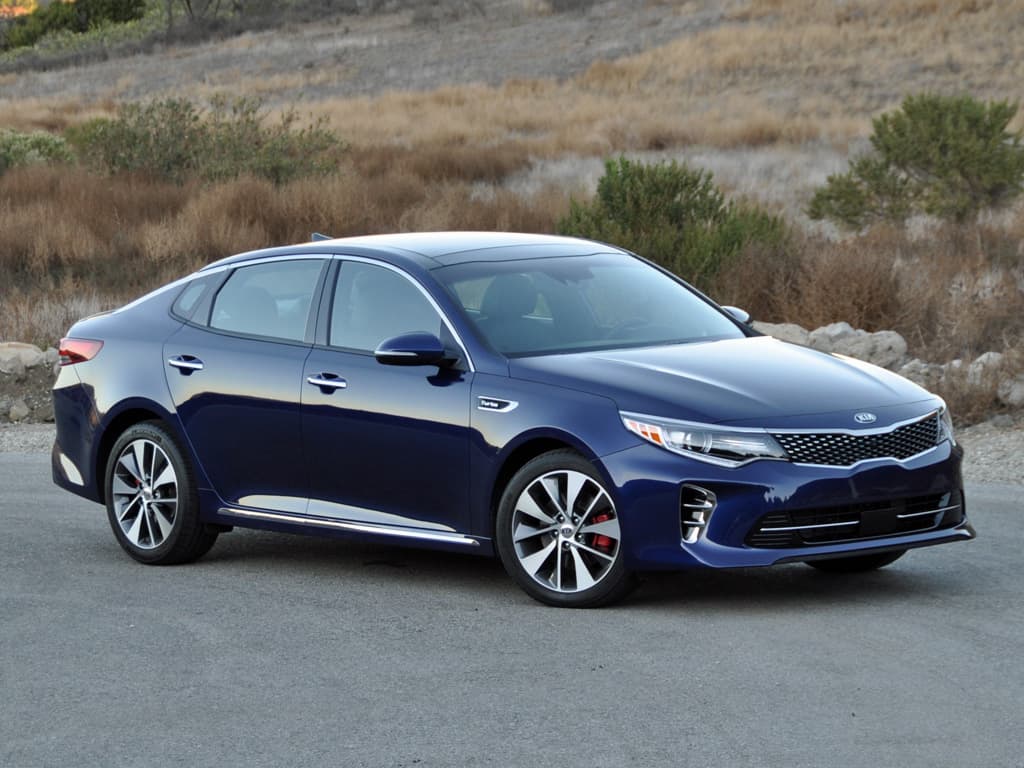 Kia optima is a midsized sedan, succeeding Kia Credos. The franchise is active since 2000. It has various names according to the selling environment. In North America, it has the same title “Optima”. While when we go across Europe, Australia, and some other regions, Optima is marketed there as Magentis. The Chinese and the Korean Markets have the title Kia Lotze and Kia K5.

The pricing of the franchise begins from $22,140. The available models for Optima are LX, LX Turbo, EX, SX Turbo and SXL Turbo. The America test drives revealed that Kia is among the best midsized sedans. Through its extraordinary performance, it has been titled as “Bang for the Buck”.

Some comparison of the first generation revealed that Optima is based on the performance manuals of Hyundai Sonata. Even the interior and exterior even resemble Sonata.

While the second generation is noted among the safest cars in the world. It was quite different from Sonata, apart from its transmission. It used the Sportmatic Automatic transmission which was even installed in Hyundai Sonata.

By the Third Generation in 2010, Hybrid Technology was introduced in Optima. This design matched Hyundai i40 in its performance manuals. The designers of this car are Italian automobile experts. From front to back Optima was redesigned, giving a sportier and slimmer look.

Peter Schreyer is the Chief Designer of 2016 Kia Optima. It’s the fourth generation of Optima. Schreyer modified the whole look of Optima. Still, there is too much that is shared between Sonata and Optima. Both the sibling companies share too much in their luxury standards.

The car is based on the concept of turbo engines. The 1.6 and 2.0 L engines are the turbocharged ones. Simultaneously they run 178 and 245 horses respectively. Optima is front – wheel drive customer.

The specified models of Optima franchise differ on the basis of their performance. Three different drivetrains maneuver the driving experience in all the models. While along with the drivetrains the hybrid tech is included in the franchise. This generation has two angular planted electronic coaches that leads to a steady electric drive.

The Plug in the Hybrid tech can go up to 75 mph and can cover a distance of 29 miles. However, at the Chicago Auto Show Kia revealed that Optima can travel up to 27 miles over the electric mode.

The charging of plug-in hybrid electric mode is pretty easy. You need a Level 1 120 volt supply which takes 9 hours to charge Optima. When you go across a better level, something like Level 2 the charging time reduces.

Though the PHEV is optional in Optima’s models. Most of the technology is shared with Hyundai’s Sonata. There is too much that can be found identical in both the vehicles. Beside their sibling string, they even share a good position in the ranking over the best midsized sedans.

Don’t hesitate from paddling the accelerator. Once you put it through you get one of the finest acceleration over your Optima. And don’t worry about the mileage reading of this hybrid car. The test drive gave the ETA results of 28 mpg.

See Also: What Is A Hybrid Car, How It Works And The History

Grille shutters have been installed in Optima which work over PHEV (Plug-in Hybrid Electric Vehicle) output. They work automatically and help in reducing 0.25 of drag coefficient. While these Grille Shutters are only available in the PHEV vehicles of Optima franchise.

The light works are quite eco – friendly. The headlights bear chrome coloring with the blue tint. They are theoretically and practically much brighter than the usual lighting in vehicles.

The battery system for the PHEV weighs 302 pounds more than the standard Hybrid cars. It was thought that the battery installation in the rear might take much of the space of the trunk. But the theory is far different from the practical at times. The battery system leaves 13 cubic meters for the trunk.

Kia Optima is full of technology. Kia UVO is not a basic infotainment system. It is not just a regular built – in processor device with a savvy screen. It is an Apply CarPlay and Android Auto device. Besides the regular features, there are plenty of optional performance tools.

Kia Optima is featured with the Eco – Das. It is the Economy Driver Assistance System which is installed for the assistance of cruise driving for the driver. Beside the Eco – Das the equipment even shows the battery display and fuselage for the vehicle.

Well, Kia isn’t back in the race of comfort. Optima is quite luxurious from the inside. The driving seat, front passenger seat, and the back seats are quite luxurious with soft patches to sit on. While don’t worry about the spacing. Optima is pretty spacious from front and back. Yet you need to be lower than 6’ to sit in.

Adaptive Cruise Control and Sensor Controlled Emergency Braking are indeed a superb safety package. The deal just doesn’t end here. It has the most to offer for the safe driving which includes passive and active modes. Obviously, it has the same air-bag feature for the active safety deal. But the passive configuration deals more with the radar sensors.

And not to forget, NHTSA and EuroCap rates Optima with 5 and 4 stars in terms of security. It is considered to be a safe midsized sedan to drive.

Camry is a name of luxury. You would find a strong competition between the Koreans and the Japanese. Kia took it long to get into a competition with the Toyota’s Camry. Presently there is a good competition prevailing between the both automobile tycoons.

Kia Optima has a good resale value. Optima is an adequate family luxury vehicle with almost everything to offer. And the point to wonder is its minimum price. The market configurative price of Optima is far lesser than the rest of the hybrid technologies. It could cost a reward to choose an optima.

On the other hand, you may also check out our 2018 review for Kia Optima Hybrid.