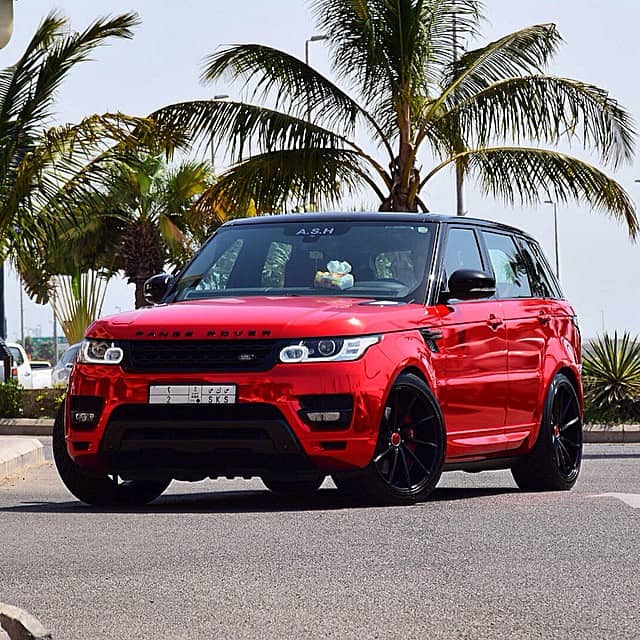 Since a century Land Rover has been renowned for its 4 × 4 Drive vehicles. Among the hall of fame, nobody would forget the extensive Discovery of Land Rover.

Through the range of dynamic vehicle designing, Land Rover has launched the Range Rover Sport. Last year during the Pebble Beach Automobile show Land Rover revealed this beast. RR Sport has been based on the 5.0 L SVR performance concepts.

The vehicle is subtle in performing over every road and weather condition. Particular it is the all-weather and all-terrain vehicle. In the present day SUVs, it is quite hard to find everything. But the RR Sport offers everything that a driver would demand.

From beautiful cosmetics to harder powertrain, with smooth cheesy performance all is available in Land Rover Range Rover Sport. The price of Range Rover Sport begins from $66,000.  When you get power, performance and looks in one car, then definitely such a price tag is pretty economical.

While our Range Rover Sport is the second generation of the series. The first generation was even quite dominative among the SUVs. The franchise has 6 different models, differentiated on the basis of their performance. 3 of the models comes with the diesel engine, while the rest of the 3 run on petrol.

Sketched from the Jaguar SVR, the 5.0 L engine is based on the sports performance . Going across the all – wheel – drive situation, the 5.0 L Range Rover Sport can make the fish fly. The incredible powertrain shows off a tremendous performance. It is quite indecent over the wallet and you might hardly get 15 mpg as the finest ETA. But it is an engine with a throttle full of acceleration and speed. Obviously, Range Rover Sport has tons of power. It can tow relatively much mass then rest of its siblings.

While the diesel engine 3.0 L would get some benefit over the fuel average. The recorded test drive showed 24 mpg as an average. Though the driving consisted straight tracks, country sides, and steep driving.

The paddle is even a power generator in the 3.0 L turbocharged V6. It can blow up to a quarter round of 100 miles with 11s. For a 4 × 4 SUV it is quite new. As SUVs are just taken as the supplements of mini trucks.

However, the sibling of Land Rover Range Rover Sport, the “Jaguar F – Pace” gives it a hard competition over the fuel economy.

Through a dedicated range of performance, the hybrid technology has been installed in RR Sport. The test revealed that the battery functionality and the engine performance were seamlessly spontaneous. They were perfectly parallel to each other which delivered a magnificent drive over the electronic capabilities of RR Sport.

Gerry McGovern played a vital role in redesigning the Range Rover Sport. RR Sport is based on the D7u Platform. It’s the Jaguar Land Rover’s signature light-weight vehicle application. Through a radical research into the topic, JLR reached a significant development.

Through the application of D7u Platform, around 400 kg of weight has been reduced from the Range Rover Sport. Instead of steel braces and joints, aluminum has been extensively used in this car. Not just the engine line, but the suspension, drivetrain, and the axel boroughs have been designed using the aluminum.

The lighter the vehicle means the heftier the performance. Every cut in the design is not just a cosmetic inclusion, it is meant for the stability of the car. The active aerodynamics have been heavily addressed.

The second generation of Range Rover Sort is much more luxurious in so many different ways. The use of brighter and smoother colors have given a new touch to the vehicle. The seats not only have more space but they are also  more comfortable. The infotainment system has now a wider and brighter-looking screen.

The weather settings are available in all seats. Not just the front passengers, but the back seat passengers can evenly enjoy the weather class and settings. The Ultra High Definition sound quality makes the music blow sweetly. The speakers have woofer amplitude with balanced sound fusion.

The RR Sport comes with the Dynamic Mode in Terrain Response automated functionality. It assists the driving according to the terrain conditions.  The track requirement is kept in mind while adjusting the suspension. This makes the driving more fun. Four Corner Electronic Air Suspension supports it.

See Also: All You Need To Know About Driverless Cars

The torque vectoring enables the drive more smooth and safe. It controls the torque of the engine and the engine brakes over sharp curves. This helps in maintaining the grip and balance of the car. It is quite helpful over steep paths and mountainous country sides.

The Adaptive Dynamic controls are the terrain functions of Land Rover Range Rover Sport. It helps in maneuvering the movement of the car and helps in reducing the slipping of the car over frictionless tracks. It works with the dynamic radar sensors which can sense things other than metals as well. The lighter weight is another package for the safety.

When getting into the class of luxurious heavy weight vehicles, the Land Rover Range Rover Sport is something outspoken. It is a class apart.