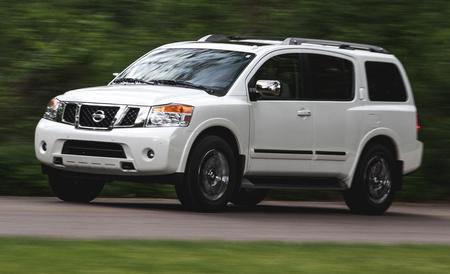 Whether it’s Infiniti or Nissan, the glory of elegance and esteem is benevolent in these cars. And if it’s about muscle, there even Nissan would not lack behind. This is what we have been seeing since last few years.

The Nissan Armada is a full-size SUV. “Armada” is a Spanish word. There it means Armed. While Armada in English means A Large Moving Force.

The Armada was displayed in 2003 for the first time. And in 2004 it was launched in the market. The Mississippi plant was used for its production. This was the start of the first generation of Armada, which ended up in 2015. The first generation was also called the Pathfinder Armada. The design was based on F – Alpha Platform. The Infiniti QX56 is its re-badged version.

The starting price of Armada is $44,900. The available trims are SV, SL and Platinum. Now let’s get into some detail of this car.

The suspension mechanism response is prompt. It does not just perform well, indeed it even has a decent fuel mileage in its class. It gives an average EPA of 16 mpg.

Nissan Armada is equipped with 5.6 L Endurance V8 engine with 32 valves. This monster offers 390 hp of power at 401 lb – ft of torque. Only the 7-speed automatic transmission is available.

Armada can attain a speed up to 133 mph. It manages to get the 0 – 62 mph mark in 5.9 seconds. The whole weight of the engine is in the division of two halves. Indeed there is a 50 50 weight distribution in the mechanism. Further, this SUV has an equal power to body ratio.

Car layout is a front engine, rear – wheel – drive. An optional 4WD is available. It is highly sustainable and has the ability to push and load double weight. Armada can tow up to 7000 lbs of weight in the rear and can hold up to 1200 pounds of weight on top.

Armada looks pretty gorgeous. Further, the glossy hood and engraved bumpers make it more attractive. Two pairs of beautiful head and taillights have a logical placement. Armada gets the LED signature headlamps. LED lights tend to increase vision for the drivers and even the car looks more charming. A good finishing has been provided to the design of the car. At the front is an impressive air exhaust system through its front grille. All the features are neatly appointed. The vehicle has clear logos of Nissan Company placed on the grille and at the rear. They will not only help them in visibility but would even enhance the safety of this monster.

The interior of Nissan Armada is ideal. This is decorated neatly. Further, the design is attractive. The addition of floors, walls, and roof are yet another emblem of beauty. Fine stitching and the matching of paint colors is done according to its seats. The flexible sophisticated skin seats cushions arm lay in this car. Cushioned cover increases the comfort with the wooden box placeholders are all in a perfect order. The LED lights are an awesome style for enlightening the inside. The extravagant second column of seating offers comfort and relaxation. Same features facilitate the third column. Its rear seats can fold if needed for increased cargo space. Armada has the 2-3-3 seating arrangement. Overall it can accommodate 8 passengers including the driver.

Equipment so installed is also classical. There is plenty of space to sit in Armada and even there is enough room to carry your grocery and luggage along. You even get an acoustic windshield in Armada.

Its distinctive size interior has the verity of features. First thing first, an 8-inch touchscreen infotainment system with navigation is standard in all trims of Armada. Mobile entertainment is yet another feature in Armada. This is also installed at the back of the seats.

Traffic navigation with SiriusXM® (for three months subscription) is even standard. The upper trim level gets the Remote Engine Start feature. Music form the Bose audio system is soothing.

Nissan Armada has no match over the Chevrolet Suburban. However, it is the closest competitor of Nissan Armada. Nevertheless, different buyers found Armada better while going through its features and performing capabilities. But we get a mass of supports for the Chevrolet Suburban. Whilst, our tests reveal that Armada and Suburban are pretty much similar. They have similar performing capabilities, almost the same price and even the same luxury. But the customer is never wrong.

Are you planning to shift towards the countryside, or you need to tow the boat along for the surfing? Then Nissan Armada has all that you need. It has power, appearance and comfort that you would mind.