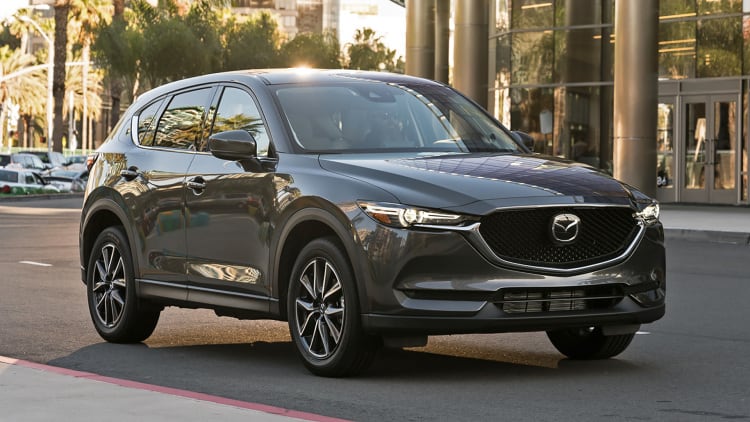 Same is the case with Mazda CX-5. This car was introduced in 2012 for the model year 2013. It is even the first car from Mazda to use a different designing structure. CX-5, Mazda3 and Mazda6 use the same platform.

The performing capabilities of CX-5 allowed it to rank at the top of the Crossover SUVs category. But later it went in the competition with a national rival. The refreshments made for the second generation may earn CX-5 the higher rank once again.

The MSRP of Mazda CX-5 is $24,045. The trim line consists of the Mazda CX-5 Sport, Touring and Grand Touring. Let’s dig into some further detail of CX-5.

As part of the marketing campaign, Mazda CX-5 has been featured in Universal Pictures’ movie Dr. Seuss’ The Lorax. The effort received acclaim as well as hefty criticism from the audience.

Mazda has been using the Skyactiv engines since long. But in the CX-5, Mazda has introduced the complete drivetrain from the Skyactiv. Mazda CX-5 begins with the 2.0 L Skyactiv inline 4 gasoline engine with 155 hp of power to roll at 150 lb – ft of torque. The engine is mated with a 6 – speed manual transmission. Then is the 2.5 L Skyactiv inline 4 gasoline engine available with 184 horses galloping at 185 lb – ft of torque. This is the standard engine offered in all the trims of CX-5. This engine is mated with the 6 – speed automatic transmission.

The base 2.0 L can ensure a good fuel economy for the city riding. But it won’t be your superstar engine. But 2.5 is something the driving enthusiast would like. Mazda wants you to be a driving enthusiast, that’s why they offer 2.5 L engine as standard.

Among the drivetrain options, we even get a 2.2 L Skyactiv diesel engine with 173 hp of power and 310 lb – ft of torque. This is an environment-friendly drivetrain. We’ve noted a 120 g per Km CO2 emission from this machine.

Front – wheel – drive is the standard configuration of Mazda CX-5. While an optional all – wheels – drive configuration is even available. When it comes to the handling, then Mazda CX-5 is pretty smooth and sharp. It makes it much like an urban rider that could move through alleys and streets easily.

Exterior of Mazda CX-5 has received some major changes. At the front, the grille design has been revamped. Actually, it is certainly the same, but the headlights give a different view now. Xeon headlamps have been replaced with LED ones, which make the grille look smarter rather than enormous. 17 and 19-inch alloy dual spoke wheels are offered in CX-5. The 17-inch wheels are available in Sport and Touring trim, while the 19-inch is available in Grand Touring. The rear lamps are even drawn sleeker for the CX-5. Previously there were the widely drawn eyes at the rear which have now become sexy. Rest of the design looks similar to the previous generation.

At the rear of the car, there is a sleek spoiler available. Along with that, some groove lines are even available in the design of the car. But we don’t get much application of aerodynamics in CX-5.

As like before, Mazda CX-5 has a rich interior. Leatherette seats, steering wheel and gear are available in upper trims of CX-5. Just the leather type used is different. The door panels even have leather on them.

The cockpit is sporty now. It is yet another ambassador of Mazda Sporty series. The front row is pretty spacious and comfortable. Even the rear row has ample space to fit in 3 passengers.

Mazda says that CX-5 has 250 more features now. And most of those features ensure safe driving.

The Mazda CX-5 comes with the 7-inch touchscreen infotainment system. The Mazda Connect empowers the system. The higher the trim, the more feature you could avail. The HD Radio, navigation and Bose Audio system are available in the upper trim level. Subscription to Sirius Multimedia is optional. Heads-up display even stays an optional feature for Mazda CX-5.

Reliability matters the most in automobiles. The more the reliable the vehicle is, the better impact it would have on the market. The test score of some 5 crossover SUVs of the same class revealed that Mazda CX-5 is a reliable car, but it’s not that much reliable. Though according to the results the Honda CR-V ranks higher than the Mazda CX-5.