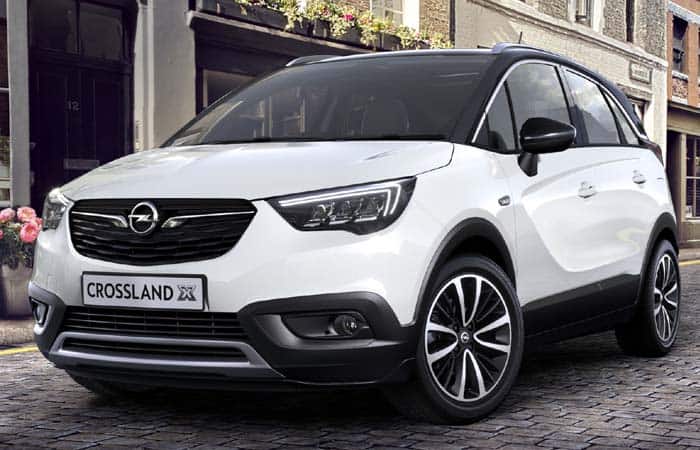 Rebadging is one of the major contributions for Opel. This automaker has distributed its cars into some major markets, based on the parent brand of that territory. And since last few years, we just came across the hatchbacks and sedans from this company. While after a long time the Opel has introduced an SUV.

It is the Crossland X, launched as a replacement for the outgoing Meriva. Well, the Meriva was a mini-MPV. And the Crossland X is the subcompact crossover SUV. It does not really make any sense that an SUV has been launched to replace an MPV. But still, that is a major factor in the market. The MPVs are becoming outdated and out of fashion day by day. And every other day, an MPV is replaced with an SUV. There are just a few MPVs left behind. While this is one of the core reasons that Opel focused on an SUV.

The development of this car began somewhere in 2016. And the market version was initially displayed during the spring of 2017 at the Geneva Motor Show. Though the car was introduced as the model for the year 2018. But by the summer of 2017, it was launched into the market. Till the date, the Opel has marketed a number of copies for Crossland X. Even, its rebadged version, the Vauxhall Crossland X made an impressive entry into the British market.

The lowest price tag on this car is around $22,470. And the model line generally consists of two to six models. Where the base version is just like an opening model of a hatchback. Further, the finest model line is available for $29,520.

The Opel offers a pretty healthy variation drivetrain for Crossland X. It ranges between gasoline, diesel and LPG engines. While the gasoline format is taken as the base variant of this car.

Well, the pretty basic among all is the 1.2 L 3-cylinder LPG engine, with 75 hp power. This is an optimal option when you have to consider saving money on fuel. While the maintenance might cost a bit more bucks based on the fuel quality. Further, this drivetrain comes mated with the 5-speed manual transmission.

The gasoline variants begin from the 1.2 L 3-cylinder engine. This is a very basic kind of engine with 81 hp of power and 65 lb-ft of torque. The 5-speed manual is standard. The performance lovers would prefer the turbocharged version. The turbocharged powertrain comes with 110 hp of power at 112 lb-ft of torque. Additional it gets the option for the 6-speed automatic transmission. While the manual remains as the standard transmission.

The upgraded turbocharged model gets 20 more horses. Along with that, it gets the 6-speed manual transmission system. And that is the only shift option available.

The handling is pretty fine. It is suitable for the city driving at a modest pace and even adjusts accordingly for the highways. Braking and steering do not feel to be going apart from the performance.

Converting an MPV into an SUV is digestible. Because the SUVs look quite handsome as compared to the MPVs. Well, this must have got the attention for Opel that they introduced the Crossland X SUV for the Meriva MPV.

Well, the designing is pretty fine. The LED DRLs and headlamps, LED tail lights and the steel wheels are some basic cosmetics. While the contrast roof, 17-inch alloy wheels and roof colored side mirrors could be found on the top trim levels. Further, the Crossland X is a bit smaller than the Mokka X. And it covers the subcompact crossover SUV category.

The Crossland X features a neatly appointed interior. It features some modern detailing for the interior ingredients. Like the ergonomic seats with 16 adjustable points. Further, the ingredients include fiber accent and trim, coat hanger and tablet holder accessories.

The spacing is pretty fine in this car. You can adjust 5 people including a driver. Even you can get a dog inside as well. While the boat is not even shy about the cargo spacing. There is enough space to carry the luggage or monthly groceries.

The Opel Crossland X gets every essential safety requirement that is necessary for the city and highway driving. The airbags, adjustable seatbelts, and the LATCHES are the basic safety ingredients. Ahead of that, it features the antilock braking system, parking sensors and the parking camera with a 180o panoramic view. Further, head-up display sounds up the safety measures of this car. While the automatic emergency braking adds some more fuel to your safety.

The Renault Captur takes place as the competitor for the Opel Crossland X. The Captur has been in business for long. While the introduction of Crossland X certainly asked Renault to improvise their dating Captur.

The Crossland X has enough specs to satisfy the family riders. Low fuel consumption and economical maintenance cost are the plus points in this car. And an adaptive design offers versatility for the everyday drive.