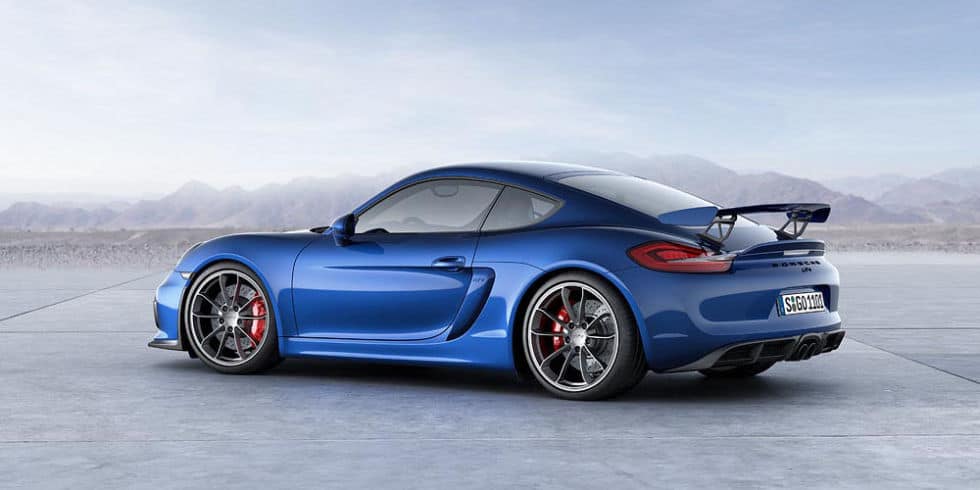 When you see a sports car made by Germans, you expect beauty and performance at its height. The Germans are the masters of the automobile industry. They were the first to introduce luxury and even the first to bring in the world class performance cars.

This car was introduced in the summer of 2015 at Geneva Motor Show. Soon, it was in the market for the general consumer. Well Cayman GT4 shares much of its mechanics with the Porsche Carerra 911 GT3. And it shares most its handling with the 991 GT3.

The Cayman GT4 has also appeared in motorsports. It has its personal best of 7 minutes and 40 seconds at Nurburgring, Germany. Well, it is even the last car to appear in any format of the motorsports using an inline-6 engine.

Further improvement is not expected in the Cayman GT4. A special version of the Cayman GT4 has also been launched in 2015. It is the Cayman GT4 Clubsport. It was introduced in Los Angeles Auto Show. The Clubsport has same performance schedules but different handling techniques. It borrowed some of its handling equipment from Porsche 991 GT3 Cup.

After comparing the performance schedules of the Porsche Cayman GT4, and the 911 GT3, we thought for a while that why would Porsche launch this car. Initially, it went pretty vague, but later we started to find out the reason.

Besides a manual, there is no other transmission system available. The rest of the Cayman notch gets the PDK, while the GT4 doesn’t get that. Well, there is nothing wrong with this transmission. It works fine and makes GT4 to launch from 0 – 62 mph in 4.1 seconds. Actually, it is 0.1 seconds faster that what has been described by Porsche. The only issue that has been discovered so far is that the gearing ratios is quite long.

The steering does not really suit the high speeds. The handling was pretty fine up till 60 mph. But as soon as we got away 100 mph, the stability seemed like it has gone absent. The Michelin Pilot Sport Cup tires are standard for the GT4. We expected a decent road grip for these tires. But the car drifted pretty loosely, unless the torque vectoring was used. The Porsche’s active suspension management stabilizes the car when on a high speed. It doesn’t let it roll over.

The clothe brakes are standard. However, the ceramic brakes are even available.

The Porsche Cayman GT4 has the same body styling as the other Caymans. It weighs 1,340 kg which is 35 kg more than the standard Cayman. The sharp and tightly pack chassis and suspension along with the engine have increased the weight.

In addition to the standard shape, the Cayman GT4 has got some utilization of aero and autodynamics. The front bumper has three vents. They bring in the air to assist the coolants in cooling the engine. The wing shaped spoiler helps in providing downforce to the Cayman GT4. This car is 1.2 inches lower than the other Caymans. The low ride enables the GT4 to launch swiftly. And especially when the gearing ratio is quite long. Not just the acceleration, the low height has even helped in increasing the grip. The GT4 has a 10-spoke 20 inch alloy wheels.

Differences could be found in the performance and exterior desiging of the GT4 and the standard Caymans. But when it comes to the interior design, everything is almost the same. It is even as luxurious as the Caymans.

Being a sporty version, the Cayman GT4 has an erect driving position. Along with that, the gear leaver is perfectly aligned. Well, the pedals are properly appointed into their positions. This is how the GT4’s cabin becomes perfect for a performance drive. Alcantara has been used for the interior trim. An optional Clubsport package is available for the GT4. It adds some sporty ingredient in the car like the ducked sporty seats. Precisely, this makes GT4 rank higher than the standard Caymans. And no doubt, with this interior it definitely becomes a sports car.

The GT4 comes with a 7-inch touchscreen infotainment system. This system works mainly as a multimedia navigator. While you don’t really get is handy when it comes to the tuning of the performance. The Boss audio System and navigation are optional features for the GT4.

The Cayman GT4 has followed enough safety standards to please the safety authorities. It has a satisfactory level of passive safety measures. There are ample amount of airbags, side impact safety is active and the roll over safety cautions are met properly.

Finding a competitor for a performance car is not a hard job. Every next automobile company has some performance car in its fleet. Commonly the German cars get the competition from their original country. The Porsche Cayman GT4 challenges the BMW M4. Though BMW M4 is relatively faster, reliable and good looking as compared to Porsche Cayman GT4. But still, the GT4 has enough power to reach the M4.

The Porsche Cayman GT4 has been designed for driving enthusiast. Fuel economy is not a chapter to be discussed while getting a GT4. Instead, the performance is the major heading.