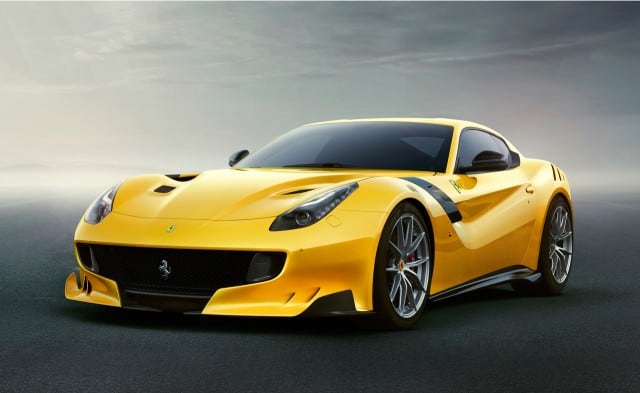 Supercars are becoming pretty common nowadays. And not just the fossil fuel cars, the alternate fuel supercars are even becoming common. But it is not essential that every supercar would have enough luxury to suffice your daily ride. The column of luxury and performance can be found together in the Grand Tourers.

The Ferrari is famous for producing Grand Tourers. The history of this company is full of performance and luxury cars. Well actually, the Italian car producers are majorly indulged in producing luxury sports cars. The Lamborghini, Maserati and Alfa Romeo are a few more examples from Italy.

Well, during the Geneva Motor Show 2012, Ferrari introduced the F12berlinetta. This vehicle was unveiled as the yet another grand tourer. While this F12berlinetta was launched as the successor of the Ferrari 599.

The Ferrari 599 was evenly a powerful luxury car. The 599 stayed in the production for six years. And soon after its discontinuation, the F12berlinetta was launched. Well, 2017 is the last year of the F12berlinetta. This car stayed in the course of production only for five years. And a successor of this car has been unveiled. It is the 812 Superfast, which has the similar design but improved performance.

The Ferrari F12berlinetta has earned a number of awards. Like its powertrain was awarded the International Engine of the Year Awards 2013. Subsequently, it even earned the Supercar of the Year Award.

The F12tdf is the performance version of the F12berlinetta. It has the same powertrain but with improved tuning. Further, Ferrari has even provided a number of one-offs and special versions of the car. Such as the Ferrari SP America and F60 America. Well, the F12berlinetta is priced as low as $309,000.

Ferrari has installed the 7-speed dual clutch transmission in F12belinetta. With this drivetrain the F12belinetta is capable of making the 0 – 62 mph run in 3 seconds. While the maximum speed we tested for this car is 211 mph.

Besides the standard drivetrain, F12berlinetta is introduced in an improved performance version as well. It is the F12tdf with 769 hp of power and 520 lb – ft of torque. While the engine is exactly the same. And even the transmission system is the same. Well, the F12tdf makes the 0 – 62 mph run in 2.8 seconds. And its top speed is the same.

The 7-speed DCT is also used in some other cars of Ferrari, including Ferrari California. But here in F12berlinetta, this transmission is quite responsive than the other cars. The gearing ratios have been reduced to give a steady thrust to F12berlinetta. And thanks to this Dual Clutch Transmission for making this car run faster.

The chassis employs 20% aluminum than the 599. The drivetrain of F12belinetta weighs 150 lbs lesser than its predecessor. And it is all because of the use of aluminum. The handling of this car is even quite fantastic. It gets the CCM3 Carbon Ceramic Disc brakes. Further, it employs the F1-Trac Traction control to improve the handling of this car.

The Ferrari F12berlinetta is beautifully crafted. Its design is similar to its predecessor. The aerodynamics of the car are even quite similar. But they have been improved as well. The aerodynamics include the Aero Bridge feature. It routes the air from the bonnet to rear in a way that it ensures an increased downforce.

Ferrari F12berlinetta even employs the Active Brake Cooling Ducts. Whenever the brakes get hot, the duct opens and lets the cool air get in. The air cools the brakes and after that, the ducts close. While the closed ducts reduce the drag. Overall this car has a drag coefficient of 0.299 g. Theoretically, the F12berlinetta has 70% more aerodynamics than the Ferrari 599. While the F12tdf has more aerodynamics than the standard F12.

Further, F12berlinetta employs 48% of weight in the front. While at the rear it employs 52% of weight. Michelin Pilot Super Sport Tyres are installed in the Ferrari F12berlinetta. The front gets the 255/35 ZR20 while the rear has 315/35 ZR20.

The Ferrari F12berlinetta is quite luxurious. It has a lavish interior. The accent trim has the Frau leather on it. Sports seats are standard. The F12berlinetta is not just sporty. It is even quite comfortable. Along with the leather, the accent even employs carbon fiber and aluminum. Well, this is yet another Ferrari with a cup holder. And at the back, F12berlinetta offers enough space to carry your luggage.

The Ferrari F12berlinetta gets a TFT infotainment screen. The screen shows navigation along with the music amplifying. The Ferrari has installed the Manettino dial on the steering wheel of the car. Manettino dial helps in adjusting the handling of the car. Actually, it adjusts the suspension, traction and some other handling features of the car.

Well, there are USB Ports in F12berlinetta. You can attach your phone for the music player. And can even charge them.

We do not have any complaint about the safety of Ferrari F12berlinetta. It has enough amount of airbags installed in it for the occupant safety. Besides passive safety, there is ABS and ESP Premium stability control as well.

Well, the safety mainly depends on the driver. While driving, it is necessary to retain activeness for the safety of oneself and others. The active safety features are installed to enhance the safety.

Still, the Ferrari F12berlinetta is a passionate car. It is full of fun. And offers plenty of pleasure while on the road.