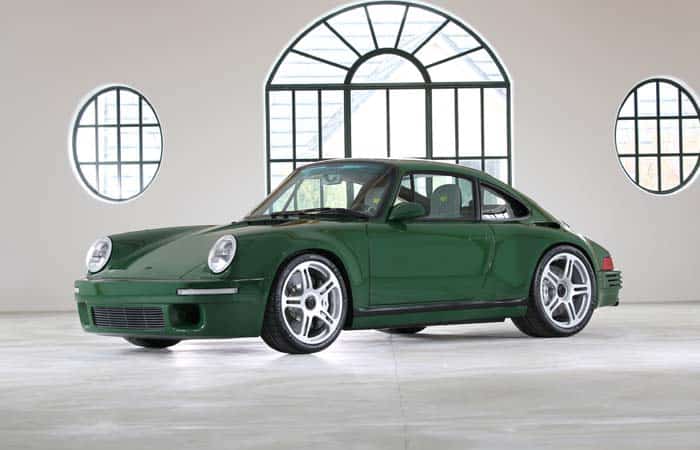 If you ever see a 1989 Porsche 911 on the streets, do not ever get confused that it is a Porsche. As it could be a Ruf SCR. Since 1978, Ruf has been creating the SCR, which looks the same as the Porsche 911, but has different characteristics. Well, the actual model continued for three years and then it was put out of production.

After succeeding it with numerous other models, Ruf finally reached SCR badge once again. In between the line, there came the BTR, then CTR, then BTR2 and finally the BTR III. Even, a CTR model was also launched as a replacement for the actual SCR. But in 2018, the company moved back to what it was created in 1978.

During the Geneva Motor Show of 2018, the Ruf SCR was reintroduced. While at the event, a lot of spectators thought that it is some retro model launched by Porsche. But soon as they went closer, they realized that it is not a Porsche instead it was Ruf.

Well, if the Ruf SCR seems attractive to you, then make a quick decision and grab one of these. As the company would only be producing 15 cars every year. While it is not sure how many cars would they build in total. As far as the price is concerned, the SCR would cost you $807,000 with the standard features. And if you add in the optional ones, the price might float to $830,000.

Now let’s move ahead and explore this car.

The RUF SCR comes packed with a 4.0 L 6-cylinder, flat aligned naturally aspirated engine. Since the beginning, SCR has been coming with a natural engine, with no booster installed. Further, this machine could produce 503 horses of power with 347 lb-ft of torque. And RUF says that SCR could attain 199 mph as its top speed. But in our tests, it could only reach 165 mph. Alongside it could launch from 0-62 mph with 5.7 seconds.

Well, there has been a lot of discussion about the engine, the Ruf copied Porsche’s design. One of the Ruf’s engineer remarked that it is a different engine, but just takes a bit of concept from its counterpart. Ahead of that, the SCR is equipped with Sachs dampers with a remote reservoir pushrod suspension. And it comes mated with the 6-speed manual transmission. The manual gearbox is certainly a fine transmission for almost every car. But the precision based dual-clutch automatic transmission has really made the job easier than the manual stick. Well, the Ruf SCR could only get hands on the manual gearbox.

The carbon ceramic brakes add much-needed stoppage power to this car. The 6-piston front and 4-piston rear brakes can stop this car in less than 70 feet from 70-0 mph.

Porsche 911’s model of 1989 inspired Ruf for the 2019 SCR. Almost every exterior designing aspect has been kept the same. The front façade, the sides, and even the rear are similar to the Porsche. The few differences added to SCR include different wheel design, a slight modification in the front bumper and the LEDs. LED lights were not there in 1989. Instead, motorist felt proud of the big halogen lamps. Well, Ruf has certainly maintained the retro aspects of the actual Porsche 911 in its SCR.

The interior setup combines various premium and rich quality ingredients. But the appointment feels like overdone. This old school fella has pretty much to share with the earlier generations of the Porsche 911. While it lacks the modern tech, that is even installed in the retro spec cars. Though luxurious, but the overloaded leatherette ingredient kills the fun. Ahead of that, it is fun for two but does not offer too many convenient spots. Well, thanks to Ruf for adding the cargo space to this car.

See Also: When to Replace Tires

If you are thinking about adding some features to this car, that would certainly be a great option. As Ruf has played well but created no tech lounge for the SCR. The only thing you would get is climate control, certainly manual, and a stereo player. Along with that, you will also get a pair of speakers and a radio player. While that is all that comes with the Ruf SCR.

As far as safety is concerned, you keep your eyes open and take notice of your driving. That is how you can be safe while driving the SCR. Thanks to Ruf for adding the seatbelts to this car. Else the driver would have jumped out of the windshield. Though such safety specs are certainly unacceptable in this world. But still, Ruf is carrying out its production without anything special. The additional element so added is the antilock braking system. Well, that was very much compulsory to add that thing to SCR. Otherwise, there is very less or certainly no chance the safety divisions could allow this car to run on the roads.

See Also: Best Upholstery Cleaner: 5 Products You Can Get This Year

We have a very wonderful competitor here for the Ruf SCR. It is no other than the Porsche 911 GT3. Well, spending more than 800 thousand for a car that is a copy of another car which is cheaper than it won’t sound so sane. The GT3 starts from $144,650 and offers tech, power and passionate driving experience. Altogether it is a lot better and cheaper than the SCR.

But still, some retro spec lovers prefer spending so much money on getting the SCR. It does stand powerful than some models of the GT3. But it cannot really match the style and the design of the newest Porsche.