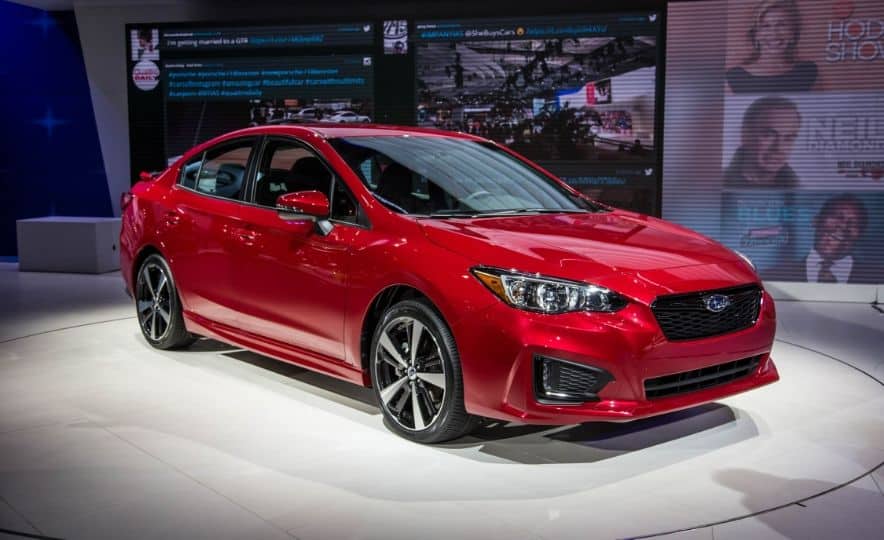 Subaru is the automobile manufacturing division of Fuji Heavy Industries. It is one of the renowned Japanese automobile companies. Fuji is actually popular for its mechanical works of helicopters and airplanes. While Subaru deals with all the development and production of automobiles.

Impreza is one of the longest running production-line of Subaru. It is the successor of Subaru Leone. And it is also the best produce of the company. Impreza has become the best replacement of all its predecessors.

The production plants of Impreza are situated in Ōta, Gunma, Japan, Kuala Lumpur Malaysia and the Lafayette, Indiana, United States. Also, Subaru Impreza has been named as the Best Resale Value (Compact Car) in its class.

The lowest MSRP of Subaru Impreza is $19,215. And Premium, Limited and Sport are the trim levels of this car. Presently the Impreza is in its fifth generation. It was introduced in 2016 for the model year 2017.

It was 1992 when Impreza was launched for the first time. Its predecessor, Leone, stayed in the market for 20 years. It has been one of the successful vehicles produced by Subaru. Leone not only just showed its capabilities on street. But it even rocked on sports’ tracks.

But Impreza is quite “impressive” as compared to its predecessors. It has performed well in motorsports. Impreza’s hold the ranks in the rally world. There are even some titles that have been won by this car.

Well, the police are even impressed from Impreza. Forces of Japan, Singapore, France, UK, United Stated and Australia have been using various models of this car in their fleet.

The powertrain of Impreza has two engines of the same type. The North American standard is the 2.0 L inline-4 cylinder engine. This configuration is offered with 152 horses powered at 145 lb – ft of torque. The North American market gets 8 different trims. All of them have this configuration in common. The drivetrain is mated with a 5 – speed manual transmission as standard. While an optional CVT is also available. And it is standard for the Premium Sedan.

Our test with the CVT transmission has in Impreza resulted pretty much same as that of the manual transmission. Though, we were expecting a sharper pick in the car with CVT.

The camshaft in this configuration has sixteen valves. They are attached pretty systematically. This is done to remove overheating of the engine while running at a high speed. Impreza, with the 2.0 L makes the 0 – 62 mph run in 8.7 seconds. And the track best is of 120 mph.

A 1.6 L inline-4 engine is even available for Impreza. This drivetrain is marketed outside North America.

Handling is an important function in every car. To enhance the stability and traction, Subaru has added the Symmetrical all – wheel – drive feature in Impreza. This is a standard feature available in all the models of Impreza. The system ensures the balance in the controlling of the car. Moreover, the system is actually a power and efficiency enhancer.

Impreza is offered in two body styles. They are the hatchback and the sedan. The hatchback Impreza is pretty spacious from inside. Though in the past it wasn’t like this. It was much like a compact minivan, or a smaller hatch. But with the increasing competition, Subaru has increased the width of Impreza hatchback. You can fit in 52.4 cubic feet of cargo in the rear with the rear seats folded. Subaru claims that 3 passengers can fit in the rear row. But it was comfortable with 2 and a bit congested with 3.

When it comes to the sedan body style, then Impreza is much more like a hatchback turned sedan. It’s pretty compact, and small. This is what usually happens with compact sedans. if you’ve kids then Impreza is good for you. But if you are up to make adults sit in the rear, their knees would certainly hit the front row seats.

Well, the sedan Impreza has the ability to work through the drag coefficient. It is indeed very helpful when the car is at high speed.

Seats are adjustable and the cockpit is even live. It’s not a luxury. However, Subaru has managed to bring some colors in Impreza. The base models are still something like with an obsolete interior. But the upper trim level gets some betterment in terms of interior. Also, Cloth seats with stitching, leather upholstery, and aluminum padded covers are some interior postulates of the upper trim.

Starlink™ 6.5-inch multimedia is standard for the lower trim. While the upper trim level gets the 8-inch multimedia. Navigation stays optional along with the Harman Kardon speakers. And keyless access is also a good feature. Furthermore, it comes with push-button start, cruise control, and auto headlights. Besides, we could not find anything enchanting in this car. Yet, it is a simple ride, pushed over 4 wheels, lying on a frame.

Subaru Impreza has ABS braking system. It also has radar sensors. Additionally, it comes equipped with automatic parking brakes and a rearview camera. All of them are under the heading of active safety measures. Most noteworthy is that the simplicity of this ride earned it the “Top Safety Pick” from IIHS. Additionally, Impreza has Eye observant driving assistant technique. Also, it has a blind spot revealing and rear cross traffic alert. And how can you forget its LED controlled steering? The Eye observant Driving Assistant technique helps in looking at less visible obstacles. Furthermore, the blind sport revealing and rear cross traffic alert work the same as in other cars.

Jetta from Volkswagen is very much similar to Subaru Impreza. While comparing the features of both the cars, we realized that there is certainly nothing different. It seems like, Jetta is much more comfortable and fun to drive than Impreza.

In conclusion, it is just like any other ordinary car. Impreza has a good resale value. This is why we recommend this car. Otherwise, it’s one of another ordinary being alive.