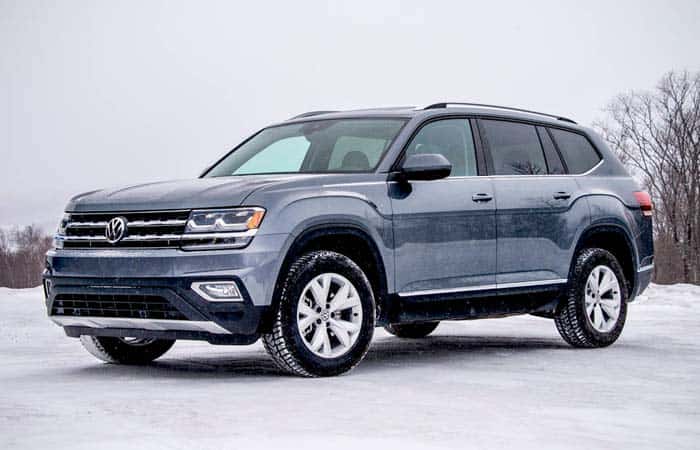 Sometimes the off-road vehicles seem like a dumb ass, that stands in the center of the road and would not move even if you keep on honking them. And on other occasions, the off-road cars seem to be the most fashionable being in the whole car world.

There are a lot of noticeable SUVs in the world. Some are like the sporty type. While some are just the off-road mules. And among them, there is a class that is just like a hatchback turned into an SUV. Those are certainly the errand runners.

Well, among the new launches of 2017 for the year 2018, we met the Volkswagen Atlas. By the looks, we classified it as another tamed beast into the market. And by the performance, it felt like just another mixture of the sporty and urban car.

In more details, we learned that Atlas came out to replace Touareg. Well, Touareg is even one of the errand runner sporty SUVs. Its production has been stopped for the North American market. While in the rest of the world it has entered the third generation.

Soon after getting out into the market, the Atlas has shown some brilliant results. Well, the Touareg was not this much active. The Atlas has been rated among the top 5 SUVs picked by the American drivers. Precisely, those are the family drivers that prefer getting modest and economical cars.

The Volkswagen Atlas is available with two drivetrains. The basic version is powered by a 2.0 L Turbocharged 4-cylinder engine which is available only on the SE models. Well, it is the refreshed engine with 235 good horses making 258 lb-ft of torque. Though it is not a performance machine, it has some serious type of performing abilities. Especially this powertrain is quite quick. But it lacks a bit because of the weight of the car.

Well, the next to join in is the 3.6 L naturally aspirated V6 engine running with 276 hp of power and 266 lb-ft of torque. This is the performance version of the Atlas. Though it does not really seem like a performance version, it is cool on tracks. Well, the V6 Atlas scored 0-62 mph within 7.9 seconds, just a 0.1 seconds shorter to the Dodge Journey GT. And her track best is even 2 mph less than the Journey GT. But to equalize the performance, Atlas offers a better fuel mileage.

The 4-cylinder Atlas makes 24 mpg as combined fuel mileage. Well, in our tests she felt a bit short, especially when we were on the expedition. And the V6 is ascertained to give 21 mpg which we somehow managed to achieve.

Besides the performance and mileage, the Atlas has some nice towing abilities. She is capable of towing up to 5000 lbs of weight. Well, the handling is quite impressive. It feels pretty stiff on the road and offers a flexible steering abilities. Her turning radius is almost 0.84 g which is subtle for a SUV. And her braking skills are even fine. The Atlas stopped at 70-0 mph within 174 feet. That is certainly decent for this much big SUV.

The Volkswagen has utilized the same MQB platform for Atlas which is used in Arteon and Golf. But it does not really make this SUV perform like a sedan or a hatchback. Instead, the Atlas is bigger than its ancestors. The Touareg was not this much longer and that is why it could hardly build its impression in North America.

Well, the structural setup is similar to the other cars of Volkswagen. It has the similar frontal design but it is bigger and wider. The rear is refreshed with the highlights of Arteon and other recently developed cars. Well, it fits much in the class of other SUVs living in North America.

The Atlas has a pretty roomy interior. It offers three-rows for the passengers and up to 7 people can sit in this car. Well, as like the exterior, the interior size has even increased. Unlike the previous SUVs, the Atlas has not compromised on the interior design and spacing. While in the other SUVs from Volkswagen you could hardly fit in 5 people.

The interior appointment is pretty decent. Luxury seats, beautiful accent and plenty of convenience options makes the interior pretty comfortable. Well, it would not be wrong to say that Volkswagen has learned that what the North American drivers demand from an SUV.

The Atlas comes with a handy 6.5-inch touchscreen infotainment powered by Volkswagen’s custom telematics system. Well, navigation, voice controls, SiriusXM radio, telephony and smartphone connectivity are available with this system. In addition to that, the Apple CarPlay and the Android Auto are also available.

Further, the Atlas gets the option for the Fender sound system with 480-watt amplifier. Additional features include remote start, VW Security services, overhead view camera, 3-zone climate control and the 12.3-inch driver’s cluster display. Well, the cluster display is pretty much same as that of the Audis and the Lamborghinis. It is the same customizable display which has navigation, car status, and multimedia display.

The Atlas earned 5-stars in its safety test. Well, its safety cage, airbags and plenty of belt options made this possible. Further, there are too many driving assistive features available such as the rearview camera, forward collision warning, blind spot monitoring, traffic alert, parking assistant and the adaptive cruise control.

Well, when it is concerned about the North American SUV, then performance, size and price matter a lot. The Mazda CX-9 is not cheaper but it is smarter and sharper than the Atlas. And Atlas has to work out its abilities to overtake CX-9.

It is the first year for the Atlas in the market. And it has almost everything that a North American SUV lover would demand. But all it takes now is the price control and continuous improvement.