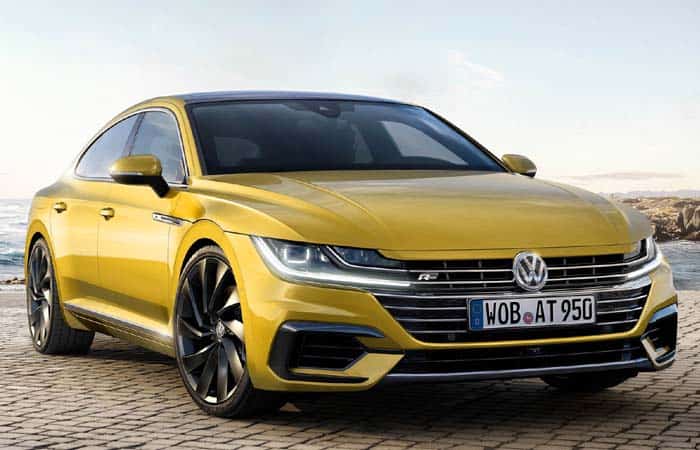 The CC has been a fine car for the Volkswagen. After a fine service of 9 years, it certainly became obvious that there should be a new car introduced in the market. Consequently, the engineers stood up and started working on it.

Finally, during the Geneva Motor Show 2017, the Arteon was introduced. It was shown as the replacement for the CC that was expected to diminish by the winter of 2017. Well, unlike the urban stance of the CC, the Arteon has been designed to be a sporty sedan in the Volkswagen lineup.

Certainly, there was no sporty sedan available in the fleet on Volkswagen. All it had was the hot hatch. But the Arteon has brought a new hope to the sedans of Volkswagen. Further, the company expects a stronger market share from this car as compared to its ancestor.

Though the specs of both the cars are pretty much similar, CC had a variety in its powertrain. And the Arteon has kicked out engine version that was famous at the time of CC. Especially, the V6 has not been included in the lineup of Arteon.

As soon as it got appeared on the market, it won the Golden Steering Award of 2017. It was categorized in the Premium Class of the midsize cars.

That is just as controversial as separating the chicken from the hen.

The Arteon gets a pretty limited drivetrain as compared to its predecessor. It comes with a couple of gasoline engines a single diesel engine. The gasoline drivetrains begin from the 1.5 L inline-4 cylinder engine having 150 hp of power with 110 lb-ft of torque. This power option is generally included in the base versions of the European and Asian models.

The next option is the 2.0 L inline-4 cylinder engine with 190 horses. Certainly, it is a power spec version for some territories, but for some regions, it is a mid-level gasoline model. The high tuned version of the 2.0 L engine is available with 268 horses and a turbocharger. It gets the torque of 258 lb-ft. Well, this is the base version of the North American market. And it is even the performance version of the whole Arteon series. It comes mated with the eight-speed automatic transmission.

The diesel versions begin with the 2.0 L 4-cylinder engine having 150 hp of power. Ahead of that, a high tune version is also available with 240 hp of power. Well, the standard configuration of the Arteon series is the front-wheel-drive. While the all-wheel-drive is optionally available for some drivetrains including the North American models.

As per the word, the Arteon is supposed to go faster than the benchmark of 6 seconds. And so it did. It launched from 0-62 mph in 5.7 seconds and lapped the best at 139 mph.

The art of driving mainly depends on the performance of a car. If the car is unable to lead down its mass, it would be hard to make it run fast. The same happens with the Arteon. It is bigger than its ancestors, but the powertrain is same.

The Arteon is available as a four-door sedan. Precisely, it is a fastback, just like the Audis. The city car trends are changing day by day. There was a time when the block-shaped sedans were famous and common. But then they became obsolete. Later the dolphin shaped sedans became a fashion. And now the fastback rule the streets.

Well, making CC an Arteon took 5 more inches of space. The Arteon has a wheelbase of 111.7 inch which is more than its ancestors. The styling is pretty much simple, but the shape features the most advanced detail. Certainly, when you have to live in a competition, you have to suffice with a number of things.

The LEDs, aerodynamic details, the Volkswagen signature grille and the 18-inch wheels are standard. Further, the all-wheel-drive models get the 19-inch wheels.

The Arteon gets a roomy interior. Especially the rear row gets plenty of space to sit. You can certainly fit in three guys in the rear without any hassle. And if you opt for 2, then they would be jumping and playing all over the journey. Thanks to the expanded wheelbase.

Well, leather is the major ingredient of this car. Leather seats, leather-wrapped steering wheel and gear knobs and the Nappa-leather accent are common here. While this is what is presently available. What Volkswagen would do in future is not really sure yet.

The Arteon comes with the 8-inch touchscreen infotainment system. It is the conventional Volkswagen Multimedia system with a bit of improved graphics. Further, the Arteon gets the digital driver cluster mainly copied from the Audi. The audio system is fine with some options to enhance the quality of sound.

Well, the infotainment system features the telephony, voice recognition, and navigation. And the Apple CarPlay along with the Android Auto are presently not available.

The Arteon gets plenty of occupant safety equipment. It has sufficient amount of airbags, child protection, and the strong seat belts.

Matching an Audi is really a hard target to achieve. But the Volkswagen managed to clip Arteon closer to the A5. Well, the Arteon is doing well till now, but it still has to do a bit more to cross the A5.

Arteon is pretty new in the market. And in this short span of time, it has covered some major aspects that CC could not cover. Well, let’s see where the competition goes.