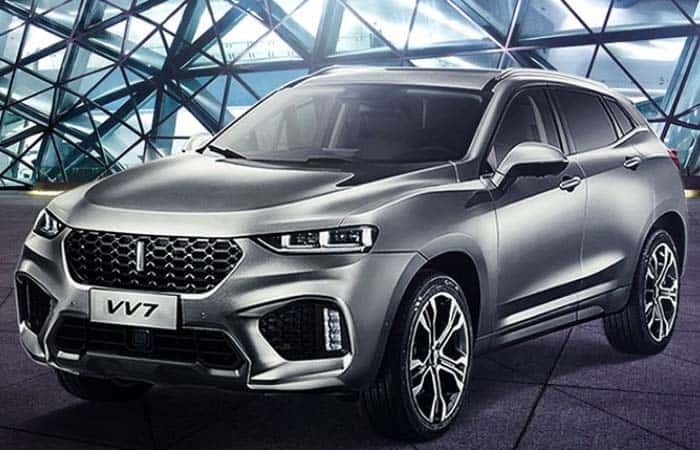 The Chinese automakers have been commonly renowned for copying other cars to make their model. But not every one of them was indulged in counterfeit designs. Well, the FAW and the Great Wall Motors have earned notable fame in the automobile industry. And they not just covered the local Chinese market, but they even spread across the rest of the world.

Recently the Great Wall Motors introduced their new brand, WEY, to cover the Australia and Oceanic region. The brand has been distinguished to carry luxury variants. And the foremost example set out by the company is the VV7. It is a mid-sized crossover utility vehicle, which remained under the phase of development since the last few years.

The WEY VV7 was initially titled as 01. But it did not carry much attraction for the target market. And even it had numerous copyright problems. Based on that, the 01 was left until the development was performed. And VV7 was specified as the commercial market nomenclature. Well, by the start of 2017, the company formally introduced the VV7. While it is available in two model levels.

The VV7 C is an entry-level variant available with the standard features offered by the company. While the VV7 S is the upper trim model, recognized as the Sports model. Further, the VV7 takes an entry price tag of $25,350. Certainly, that is fine enough for an entry-level SUV. But the quality insulated in the car can hardly match this price. As it has some premium ingredients that you might not find within this price range.

So far the WEY VV7 has spent a fine log in the commercial market. And let’s see what it can do further.

See Also: Why is My Car Aircon Not Cold

The Great Wall Motors developed their in-house performance mechanism. And the similar technique has been utilized on all other variants launched after the VV7. While the only difference that has been recorded so far lies in the performance capability.

Well, the VV7 is powered using the GW4C20A 4-cylinder turbocharged engine. It is the first ever variant for the WEY to use this mechanism. And here it produced 231 hp of power and 266 lb-ft of torque. While both the models of VV7 utilize this same technique. Further, the powertrain is matted with the 7-speed dual clutch automatic transmission. Ahead of that, the company claims that the VV7 can lap 0-62 mph within 9.8 seconds. And the suggested top speed in 155 mph. Well, the ground realities are a bit different than the actual claim. But it would certainly escalate further in the next tests.

In addition to the performance, the VV7 can give you a combined fuel mileage of 18 mph. Means, you get almost 16 for the city and 20 on the highways. Well, if you put this mileage in the comparison bar, the American, Japanese and European SUVs can give you far better with this size of the mechanism.

The handling is pretty fine and you would feel it pretty responsive. Either on the highway or within the city, the VV7 offers a crispy handling ability. But when you bring that into comparison with the other brands in the market, you might pinch out some catches.

Well, it is the first ever car of WEY and we can expect such figures from this car. While we even expect some better results from the subsequent models.

The VV7 is blessed with a pretty stylish exterior. And it gets modern cosmetics. Well, the cosmetics include the Leopard grille, prominently copied from an American SUV, shark fin antenna, fin spoiler, and the 20-inch alloy wheels. Further, there are 7 colors available for the exterior.

Besides the styling, the VV7 incorporates some decent aerodynamic application. And that could certainly be felt while driving this car.

The interior setup is pretty impressive. It is something you cannot expect from a Chinese car. And it does not even give any probable hint that it has been copied from any other brand. While the setup is much like an Italian cuisine lavished with leather and fiber. Further, the heated seats, power adjustment, and the seat memory setup add some more quality to the car. Ahead of that, the VV7 offers spacing for 5 including a driver. While it is quite spacious and certainly comfortable. Additionally, you even get some handy space for the cargo. Means you can easily pack-up for the long journeys.

Can you read Chinese? Well, the WEY prefers its mother language and the VV7 gets a fully Chinese 12.3-inch touchscreen infotainment system with a very few bits of English on that. If you can read that, you might enjoy that funky kind of system. But if not, then you might have to hammer your head. Further, not Android Auto as the Chinese do not prefer Androids. Though they go with Apple, the VV7 does not even have the Apple CarPlay. Well, what you can do with this system is just to toy it for multimedia and in-car settings, such as climate setup and the ambient light changer. Ahead of that, navigation is optionally available for this car, and that is even in Chinese.

There are plenty of safety features available for the VV7. Well, the standard features include a reinforced structure and the frontal airbags. Additionally, you get the option for the parking assistant, all surround camera, lane keeping assistant, stability and traction control, traffic sign recognizer, autonomous braking, and the object detection. Well, we have not tested them so far, but we expect them performing as per the requirement.

The only hint that we have is that Great Wall Motors got inspired by the Peugeot 3008 and crafted the VV7. Well, in China it is marketed as 4008, and even it is assembled over there. The VV7 has some similarity with its design, but it is not its copy. While on every ground the 3008 stands better than the VV7.

A cheaply priced SUV is definitely an attraction. Especially when it has a quality interior and a nice design. But the performance needs some improvement.