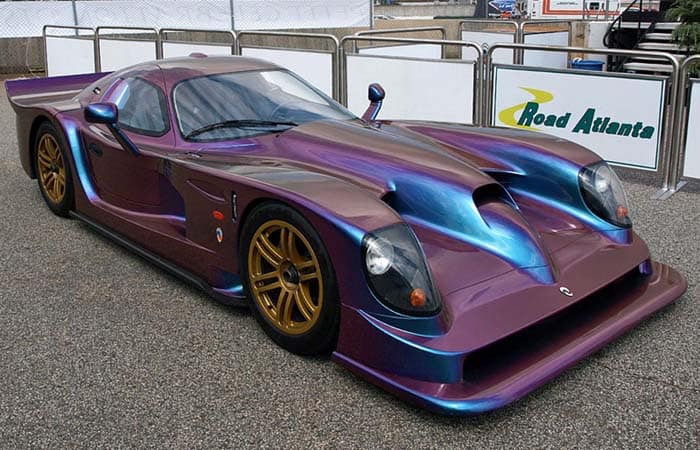 The racing world is entirely different from the urban or the extra-urban culture where we normally drive cars. They have a different science, an ice-cold engineering, different styling, and even different fueling concepts.

Since long we have been seeing a lot of sports cars. And even we see a lot of them on the roads. Well, don’t be confused between a luxury sports trim car and an actual sports car. You cannot drive a city car off-road for long. Instead, you would need an off-road vehicle for such an expedition. But you can bring off-road vehicles on the city roads. Well, the same goes for sports cars. You can take out the Panoz GTR-1 on the race tracks and evenly you can show-off that asset on the city roads.

Well, the Panoz is not shy to the auto world. Neither is the GTR-1 unknown. We have seen it driving in the Le Mans and even saw it running in the FIA GT Championship. While we seldom saw this beast running on the city roads. Well, the Panoz GTR-1 was developed way back in 1996 for the 1997 FIA GT Championship. And after a successful test, the vehicle was brought onto the track.

But it was never kept concealed. Instead, Panoz marketed this car since then. Though it restricted some market parameters. But you can get one of those beasts for $900,000. Well, what so special in this car? And why is it so much expensive? That is all because of its sporty mechanism and the sports spirit.

The GTR-1 came out with a 6.0 L V8 engine. And since its launch, there has been no change made in the mechanism of this car. Further, the power-machine is coupled with a ZF 6-speed transaxle transmission with the paddle shifters. Ahead of that, this combination delivers 600 hp of power with 500 lb-ft of torque.

The track version of the GTR-1 is capable of knocking 0-62 mph within 3.4 seconds. While when it comes to the streets, it is left to launch within 5.0 seconds. Along with that, it covers a top speed of 155 mph. While the track variant can hit 177 mph. Well, this difference is understandable that when you have to unleash a beast on the streets, you have to muzzle it first.

The Panoz GTR-1 has been featured to homage the founder of the Panoz automobiles. He passed away in September of 2018. While the GTR-1 has not received any change for the event as well.

When you prefer diving out on a street with a Panoz GTR-1 you might need fixing the suspension and as well as tighten up some handling specs. As the GTR-1 is created purely for the tracks. But just recently it saw some city roads. And a common expression is to get it prepared for the signals and the traffic on the roads.

Rest, the GTR-1 can certainly make you enjoy the beasty setup it has been made for. But there are a lot of other options that surpass the capabilities of the Panoz GTR-1.

The Panoz GTR-1 is designed for the tracks. It is not sensitive, neither attractive nor sexy. The GTR-1 is a just a beast pulled out of a jungle where she mingled with her mates and collected the trophies. What would you expect a sports car to look like? LED lamps, stylish wheels, aggressive grille and some other stuff like that? But the GTR-1 has a nose, made to keep the 6.0 L giant cool, uplift flat wings to keep the car intact with the road and very low ride height. It is a perfect design when you are counting on performance. As it is completely an aerodynamic structure. But it does not have enough style to be shown off.

Thinking about finding lux in this car? Hey! It is a pure sports car, brought and fed on a race track. There is not a luxury or rich leather material included. Instead, it gets the sports seats and an old fashioned cockpit that is good enough for the racers. But if you are eyeing a comfortable compartment than the Panoz GTR-1 is not exactly the car you should look for. Though Panoz does offer a leather-trimmed interior setting. But that still does not suffice the competition. Well, it is among those beasts that you should sit in and take out on the track.

The Panoz GTR-1 does not feature any sort of infotainment or entertainment system. No touchscreen and no stereo player. It just gets a central command radio system with the two-way communication option. While you can get the touchscreen, stereo player, navigation system and the speakers installed in this car. But that is not something offered by Panoz. Though it does offer such enhancements in the other cars, readily it is not available for the GTR-1.

Concerned about safety? Yeah, the GTR-1 does get some airbags and the adjustable seatbelts. While if you are thinking about having a tire pressure monitoring system or any other electronic safety feature, then you won’t find it here. It does have traction control, stability control, and the anti-lock braking system. Even it carries the brake force distribution system. But that is all you can get with this car.

There are tons of other options that you can consider besides the Panoz GTR-1. And cars like the GTR-1 are quite rare. You might see such a thing once in a blue moon. Well, after long consideration, we came across the Nissan GT-R NISMO. It is even a beast, but it is among the tamed beasts. And it behaves well, has a nice shape and you can comfortably sit in this car.

As per now, the Panoz had been able to build one of the GTR-1 for the streets. While they are looking forward to further serve other customers.