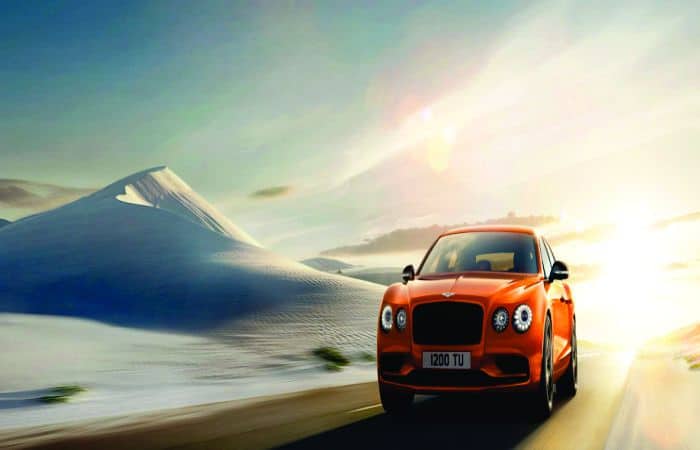 A flying spur would certainly mean to accelerate a Pegasus. But here the story is slightly different. Well, what a 600 hp engine can do? It can show speed, sound acceleration, create loud snoring and can even make the hills rumble.

But the Bentley’s Flying Spur is not like that. It is way different than the conventional sports cars and the muscle machines. Though it even has the 600 hp engine. But that does not make it a monster.

It is a tame horse that is meant to deliver luxury, comfort, and excellence. It has everything that a royal car should have. Well, it was 2005 when it was first introduced. The first generation of this car was introduced as a model of the Bentley Continental series. But the second generation was created as a separate entity. It is no more Bentley Continental Flying Spur. Instead, it is flying on its own.

Well, the first generation winded up in 2012. In 2013, the second generation was introduced. A number of technical, cosmetic and interior improvements have been made for this generation. Along with that, there are three trims added to this production series.

This article is all about the Bentley Flying Spur with the W12 engine. A twin-turbo W12 engine is certainly a monster. And you really need a lot of words to describe every bit of its performance. Certainly, it is something that is beyond the standard automobile categories.

Since the beginning, the Bentley Flying Spur is rolling on the 6.0 L W12 engine. Well, it has sheer power and command over the road. It would not be wrong to say that this 6.0 L W12 engine could rule the streets. But the story is a bit different.

That is not a big difference at all. And especially when you are rolling on a W12 machine. But still, it is a monster.

On the road, this car roars like a lion. It has a pretty strong snoring with a lot of power to show off. Every bit of this car scores smoothness. You would not feel the engine dwindling in an awkward position. Instead, you will find tranquility at every turn.

With the maximum Flying Spur W12, we scored 0 – 62 mph in no more than 4.2 seconds. Well, that is not too much fast as compared to a number of other cars. But that is way sweeter than what the sports cars could do.

And what about the top speed? The Bentley Flying Spur scored 202 mph on the proving ground. Well, that is pretty elegant for a car like this.

The Bentley Flying Spur has been designed to accommodate elegance and luxury. Every bit of its exterior depicts nobility. Though it looks pretty similar to the other Bentley cars. Specifically, it looks the same like the Bentley Continental GT models. But the rear design might create some difference.

It has sufficient design to support various drivetrains. Especially the one with the V8 and above engines. Well, sports is not the center of this car. Even the speedy performance is not required for such a car. And therefore, you may not get much presence of aerodynamics on this car. It is just another royal coach. Further, there are some customizations available for the exterior design. But they certainly increase the glorious moments rather than beautifying it.

The Flying Spur has a luxury interior as like all other Bentleys. It is laced with premium leather, burr walnut, and chrome. There is a wide range of colors for the trim. Single tone and dual tone seat color options are available. Seats have quilted leather on them, specifically the finest of its kind. And not just finest, the softest of its type.

Further, the hides and the levers have chrome trim on them. Overall, the Bentley Flying Spur has a remarkable and classic interior. Nevertheless, it is one of the finest grand tourers. Well, to add more luxury to your car, you can opt for Mulliner Specification. It will add more colors and options to your ride. In a way, it will certainly optimize the luxury of your car to the heights of the royal ride. Well, Mulliner was even famous for their interior crafting in the past.

The 8-inch touchscreen infotainment system is included in this car. This system offers music, radio, and telephony. Further, satellite radio services are even available, but dependent on the location.

The audio system is really fantastic. It is obvious that a car with such a price will certainly have a diligent sound. Well, it is backed by Bentley with 8-speakers along with 8-channels. And the smoothness is derived from the Balanced Mode Radiator (BMR).

Safety is an obvious factor for every car. Without the safety setup, cars are generally not allowed to go on streets.

Well, Bentley has taken care of the safety measures in Flying Spur. It has sufficient passive safety available for the occupants. Along with that, there are some active safety features available as well. Like the electronic brake distribution, adaptive cruise control, and the advanced braking system.

See Also: Best Cars Guys Use To Pick Up Girls

Well, you have got money to show-off? Or you wish to boast? Then the Bentley Flying Spur would make you fly. Even, if you are a Bentley fan, then Flying Spur would not be a bad choice. But if you are looking to step into a true luxury, then there are more vivid options available.