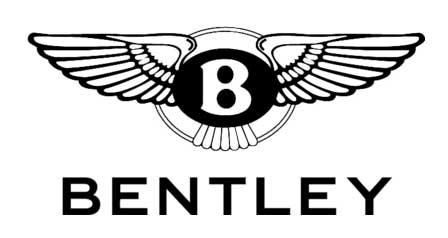 A renowned British luxury automaker, Bentley is a subsidiary owned by the German car manufacturer Volkswagen AG. Founded in 1919 by W. O. Bentley and his brother H. M. Bentley, the company was initially involved in the sale of French DFP cars, but Walter always had a deep interest in designing and building his own range of vehicles that would bear his name. That’s how the Bentley history started, and it’s one of the biggest luxury car brands today. Continue reading to learn more about the Bentley logo, their history timeline, interesting news about the company and their current car llineup

It was during a visit to the DFP factory that he was inspired by the idea to use lightweight metal in place of cast iron to make engine pistons. This led to Bentley’s first aluminum pistons being produced, which went into service during World War I. The company was registered as Bentley Motors Ltd in 1919, whose first appearance was at the London Motor Show later that year.

An engine was built in December, but orders were not taken until the mid of next year. Development was quite slow though, as the company’s first cars were not ready for sale until 1921.

Important Events in the History of Bentley

During the 20s, Bentley produced some of the most distinct vehicles of the vintage era. W. O. Bentley had the idea of developing a racing engine, which resulted in the creation of the Bentley 3-litre that provided speeds up to 80 mph. Numerous records were set, including a victory at Le Mans in 1924, followed by 4 consecutive wins in 1927, 1928, 1929 and 1930. Bentley’s domination on the racing circuit soon became the talk of the town in the motoring world.

However, despite public acclaim and impressive racing records, Bentley faced several challenges in the 30s. Financial difficulties plagued Bentley Motors and therefore led to Rolls-Royce acquiring the company in 1931. Production was on halt for two years until it was moved to Derby, where a new sports car was produced that featured the best attributes of both brands. W. O. Bentley continued his role at Rolls-Royce, but unhappy with the way things were going so he left to join Lagonda, a British car manufacturing company, as soon as his contract at Rolls-Royce expired on April 1935.

In 1946, Rolls-Royce moved to a site in Crewe, which provided the company access to a community of highly skilled mechanics and engineers. With the latest technologies at their disposal, Bentley was able to create a motor car, the Bentley Mark VI, which could be driven to its limit. These advancements also allowed Bentley to transform their cars into luxurious high performance grand tourers. Due to this, the Bentley R-Type Continental, a coupe with a top speed of around 120 mph, saw the light of day in 1952. This was followed by the debut of the highly awaited Bentley Continental Flying Spur in 1957.

Bentley Motors underwent continuous development during the 60s. This led to the Bentley T series being launched in 1965. The smooth performance and amazing design of the T series marked a revolution in the sporting heritage of the marque.

The 70s was the darkest period in the marque’s history, as the founder W. O. Bentley died in 1971. However, the association between the building partners and Rolls-Royce stayed on track and infused an incredible mark of luxury in Bentley’s DNA. In addition, the capacity of the famous V8 engine was increased to 6.75 liters. The size remains unchanged until today.

During the 80s, Bentley finally developed its identity. It also marked the start of the Bentley model line that we know of today. In 1982, the Bentley Mulsanne was launched, which perfectly depicted the Le Mans heritage of the marque. Capable of accelerating from zero to 60 mph in 7 seconds, the Mulsanne became Bentley’s fastest road-going vehicle of the age. By 1989, majority of the vehicles being produced in Crewe were Bentleys, where its vehicles were beginning to outsell those of their associate’s: Rolls-Royce.

This was followed by the Bentley acquisition in 1998. Volkswagen purchased all the assets of Bentley and became the owner of the marque. This meant that after 67 years together, Rolls-Royce and Bentley would become separate brands once again. However, the acquisition brought newer technologies and a £500 million investment from Volkswagen, which was put towards the building of a new Bentley and the Crewe factory.

In 2001, Bentley’s Le Mans heritage was revived, as two EXP Speed 8’s were participating in the competition. Finishing third, it brought Bentley back to the podium after 71 long years. Another milestone was marked in Bentley history in 2009. Celebrating the 90th birthday of Bentley Motors, the brand new Bentley Mulsanne, a formidable combination of 90 years experience, was introduced to the market.

Today, Bentley is renowned all around the world for its premium luxury and sports vehicles. As of 2011, sales increased by 37%, with a majority of the total sales attributed to the new Continental GT. The marque serves countries globally!

There you have it, the history of Bentley illustrated in a timeline. Although Bentley initially lost control of the company, they have grown to become one of the most successful car manufacturing brands in the world.