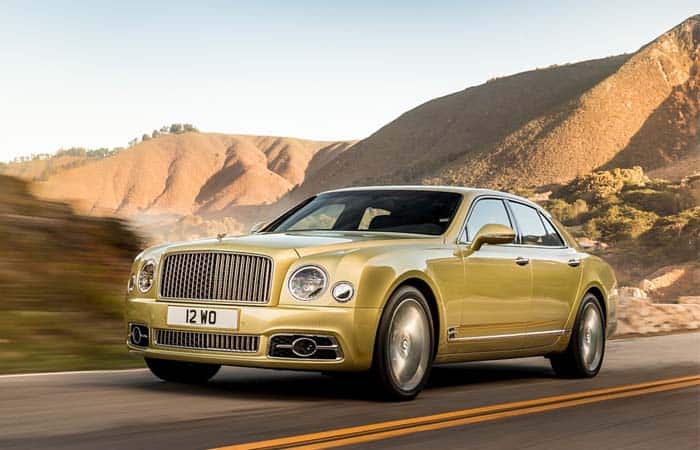 Elegance has various kinds. It could be luxury, mystic, royal or beautiful. But sometimes, elegance has everything in it. And sometimes elegance is not alone. It comes with some muscle.

Well, imagine how your day would be when you have to drive something that is elegant and powerful? Something that could make you feel you are flying in the clouds. Well, that is what the Bentley introduced in 1980.

It was the Mulsanne, named after a patch on the LeMans Racecourse where the cars reached their top speed. Well, Bentley won five consecutive LeMans events from 1924 to 1930. Certainly, at the Mulsanne Straight, the Bentley cars could have reached some enormous that lead to their consecutive victories. And it impressed Bentley this much that they named their performance machine after that.

The Bentley Mulsanne is a hand built a car like all other Bentleys. Normally it takes around 3 months to create one Mulsanne. This construction does not include the engine as it is manufactured separately. And it certainly takes around 1 and a half day to build an engine, specifically a Bentley Engine.

A number of marketing campaigns have been carried out to promote Bentley Mulsanne. Like the Breitling, SA produced wrist watches for the promotion of Mulsanne. Well, along with the standard Mulsanne two more models are available, the Mulsanne Speed and the Mulsanne Extended Wheelbase. And the lowest price for a Mulsanne is $307,395.

The Bentleys mainly live on the W16 and the W12 engines. But to stay steady in the market competition it at times becomes obvious that you have to leave some of your traits. The V8 engine is one of the market competing for equipment. As like the other turbo editions from Bentley, the Mulsanne even gets the V8 engine.

It is a 6.75 L V8 twin turbo engine. Well, it is not the one used in Continental and the other V8 cars from Bentley. This is one of the oldest powertrain developed by Rolls-Royce. For the Mulsanne, there are a couple of tunings available. The first being the 505 hp with 752 lb-ft of torque. It is the standard Mulsanne with the basic wit. While the later is the Mulsanne Speed with 530 hp and 811 lb-ft of torque. And both of these drivetrains are matted with 8-speed ZF automatic transmission.

In a way, the Mulsanne is one of the sports cars from Bentley. But do not confuse a Grand Touring sports car with a street legal as well as illegal sports car. In our tests, Mulsanne launched from 0-62 mph within 4.9 seconds. We had heard that Mulsanne could only hover up to 187 mph. But in our tests, it scored 190 mph.

The handling of Bentley Mulsanne is as smooth as a butter. The steering control is flawless. And the braking is even quite fine. But it is not made for a rush driving. It is a companion of luxury and pleasure rides. Though it has the sports instincts. But it is not much like a sports car. It is still a luxury car having the blood of a grand tourer.

The Bentleys are the highly modifiable and adjustable cars. You can trim the exterior as per your choice. Color, wheels, abstract and cosmetics could be set accordingly. It does have a pre-built exterior design. But most of the concept could be modified.

The same goes for the Mulsanne. It carries the same Bentley Signature Grille. Further, the front design is even same as the rest of the Bentleys. But it looks much lengthier then rest of the Bentley crew. While the extended wheelbase model adds more length to this car. Luxury and elegance are the only ingredients of this car. Like you get the complete LED headlamps, magnificent alloy wheels, and contrast color options.

The Mulsanne carries the same tradition of luxury and comfort offered by Bentley. The Mulsanne has leather quilted seats, accessible bottle and cup holders, and all other accessories that make the ride comfortable. The interior color, accent trims and the ingredients could be opted as per the choice. Well, you do not have to worry about keeping your drinks cool. As the Mulsanne has its own personal cooler that keeps the drinks chilled for you.

Comfort is just like a nominal description of this car. Certainly, the ultra-luxury could elaborate the interior of Mulsanne better.

The Mulsanne has the 8-inch touchscreen infotainment system, powered by Bentley’s custom firmware. The amazing thing is that the system supports the Android Auto. Further, this system has Wi-Fi compatibility, 4G, audio enhancers and voice recognition in almost 25 different languages.

Besides the installed infotainment system, there are two 10.2-inch tablets available with this car. Those are the mobile tablets that work within and out of the car. They display the performance of the car, play audio, movies and do a lot of other stuff.

The stock audio system in Mulsanne is pretty significant in terms of sound quality. But if you need some more class of sound emission then you can get the Naim Audio system. It comes with 20-speaker and a 2,200-watt amplifier that makes your every music soothing.

The Bentley Mulsanne has everything ready to protect the occupants of the car. While Mulsanne is one of those Bentleys that comes with enhanced active safety features. The Mulsanne has stability control, collision mitigation, adaptive cruise control and enhanced braking system.

The blind view monitors are becoming essential day by day. This is because of the increasing traffic. And it is unpredictable that when would anyone try to cross you in an unorthodox manner. Well, the Mulsanne gets the blind spot detector as standard. In addition to that, the rear view parking camera is also standard on this car.

The Bentley Mulsanne is the choice of the Bentley lovers. Ahead of that, where price matters, there Mulsanne is a perfect option. But if you need smoothness, performance, and delight, then you would have to choose something different.