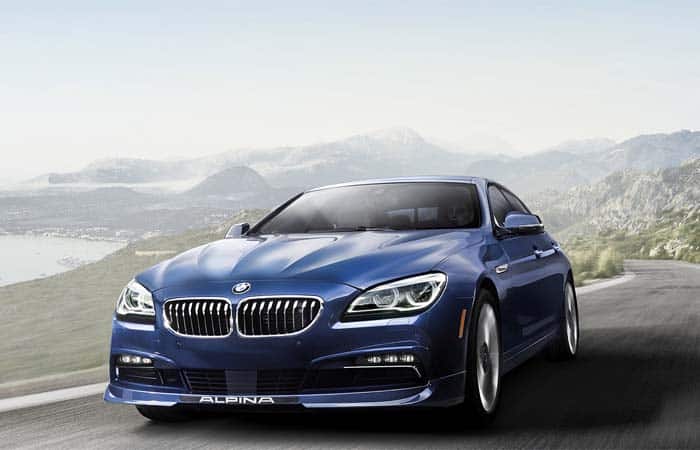 The BMW 6-Series is the luxury brand of this BMW. It is the executive class cars. These are not just the mid-level executive cars. Instead, they are a mixture of high and medium level executives.

The Alpina B6 was introduced in 1983. The initial release was much more powerful than the standard BMW model of its class. But the Alpina did not get much fame initially. Later with the time, BMW advertised these cars through a number of ventures. And even placed them up for the motorsports.

The Alpina cars are even created on demand of the customer. Since the first car of the BMW Alpina, a number of custom oriented cars have been created. A B6 version was remodified on request of a customer. It was based on the BMW M3 Cabrio and was titled as the Alpina B6 3.5 Cabrio.

The base level Alpina B6 is priced at $124,300. There is just a single trim level. But there are a lot of attractions available for this car.

Well, the BMW Alpina B6 comes with a 4.4 L Twin Turbo V8 engine. It is indeed a monstrous powertrain. Generally, the luxury cars are tuned to perform relatively softer and smoother. They do not get much of the tuning impounds. Those are the sports cars that get massively tuned engines. But this luxury has been tuned to perform aggressively. It has 600 hp of power revving at 590 lb-ft of torque.

Further, the Alpina B6 has the BMW xDrive drivetrain. It means it has the all-wheel-drive configuration. And this is the only driving option available in this car. Nevertheless, this is the best choice for such a heavy engine. And it has not just improvised the performance of this car. It has even strengthened the handling ability.

The 8-speed torque converter transmission system is standard in the Alpina B6. With this powertrain, we were able to roll from 0-62 mph in just 3.5 seconds. And its track best is not less than 200 mph. Indeed, it is a splendid powertrain. And a passion for the driving enthusiasts.

The handling of this car is even crispy. All the credit goes to the xDrive that has allowed more room for sharper turns. We first rolled down the urban culture to test the braking and steering of this car. Every turn was smooth, and it braked timely on every traffic signal. Then we moved towards the hill. The torque distribution was awesome. It did not feel like the Alpina B6 was huffing at any point. And every turn was full of agility.

The Alpina B6 is available in 3 body styles. The coupe and convertible are available as optional styles. While the Gran Coupe is standard. The BMW’s Gran Coupe means a Sedan. The exterior design is pretty similar to the BMW 6-Series. But the aerodynamic application is quite versatile.

The bonnet has three flares to modify the wind movement. The sides even have the flares to disengage the air. The rear has the slight upwind spoiler. It is pretty beneficial in providing a downward thrust to this car.

The 20-inch alloy wheels are standard. There is no other design available for the wheels. While the performance tires are optionally available. There is even a wide range of colors available. You can choose from metallic and non-metallic range.

Along with the massive performance and robust exterior, the Alpina B6 has a remarkable interior. In all aspects, it is a complete car with everything to offer. It has a classified cockpit design for the driver. And an elegant interior for the other passengers. But the coupes do not offer much space at the back for passengers.

The leather seats are standard. Further, the seats are heated and have the power driving options. The Bavarian tailoring capabilities have been utilized at maximum for this car. There are 8 different variations available for the interior styling. The styling includes the color contrast, different ingredients and numerous shades for the ambient.

Indeed, the BMW Alpina B6 is full of luxury and pleasure. It is a car that has the extreme comfort and joy.

The Alpina B6 has the similar features like the other cars of the 6-Series. It has a touchscreen infotainment system which is compatible with the Apple CarPlay. Well, Android Auto is yet to come.

Further, navigation, Bluetooth and auto climate control are available for this car. When we talk about the sound system, the standard system is pretty soothing. But if you want something more to enhance the audio capability of this car, then you can opt the Bang and Olufsen Sound System.

BMW has invested a pretty good budget on the safety of its cars. Well, we have never heard about any BMW crashing in the woods because of its technical malfunction. Instead, we have seen a number of BMW drivers and passenger being saved after a horrible impact because of the accurate safety measures in these cars.

Similarly, the BMW Alpina B6 is packed with a handsome amount of passive safety equipment. They not only deploy the safety kit after a collision impact, instead, they even reduce the effect of the collision.

Further, the active safety features are even packed with usefulness. Like the Alpina B6 has the Tire Pressure Monitoring System, a backup camera, Parking sensors and Blind Spot Detection. In addition to these features the night vision and pedestrian detection sensors are also available. Automatic emergency braking is certainly standard. While the basic features included are stability control and the pre-collision safety system.

This German Bella gets the competition from its nation fellow. It is the Audi RS7 that challenges this German executive car. On comparing the performance of both the cars we found that there is a minimal difference between them. Though RS7 is totally a sports car. But it is just 0.3 seconds faster than the Alpina B6. Besides performance, both the cars are full of luxury and beauty.

Well, the BMW Alpina B6 is a complete choice for the grand touring and luxury drives. It has performance and comfort, both hand in hand. Indeed, you won’t miss out anything in this car.