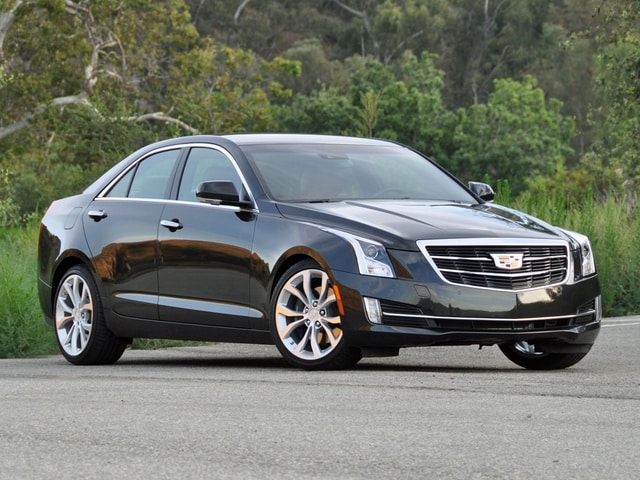 In 2013, Cadillac announced that they would be launching a sports luxury sedan. It would be able to challenge the sports franchises of BMW, Mercedes, and Lexus. The elucidation was taken as the hypothetical statement of the Cadillac engineers. It was used for the amusement unless the Cadillac ATS was first driven. It changed the whole scenario.

Cadillac ATS comes in two different shapes with three different engines and the availability of the all – wheel – drive. ATS has been designed to target semi – luxury German sports vehicles, and it does match them bit by bit. The available models of ATS are the 2.0 L Turbocharged, 2.5 L four – cylinder and 3.6 L V6. Cadillac ATS is the successor of the Cadillac BLS which had its last sale in 2010.

By 2014 Cadillac was in a healthy phase to launch a German competitor. Pricing of ATS starts from $34,210, which is pretty decent when discussing the luxurious sports cars.

The three different models of the ATS have three different performances. 2.0 L turbo with 272 hp, generating 295 lb – ft of torque offers speed and acceleration. The American made car is capable of showing a remarkable speed over curves and turns. It demonstrates the urban driving culture.

The 2.5 L base four-cylinder ATS has some domestic costume. Though it has the ability to show good speed and acceleration, but it has not been worked much. It offers a good mileage and a perspective for driving smoothly in the city.

The 3.6 L is a V6 machine is the real monster of all ATS. The powerful engines growl to show massive speed and enormous acceleration. It is the true spirit of sports and offers a wide range of speedy driving.

The ATS offer the lower fuel consumption ability. It has been designed to work over less number of cylinders. ATS can shutdown extra cylinders if it is meant to save the fuel. While it’s a rear-drive vehicle but the 3.6 L offers the all – wheel – drive feature.

Well, it won’t be wrong to consider that Cadillac worked out to save more fuel and cover more distance. Besides mileage, all the ATS models have been distinguished to run the curvy roads with smooth and prompt steer. This is where the drivers get their wonderful car.

The whole structure of the ATS gives a decent royal look. Seemingly, it depicts of the royal blood been hovering to run faster and faster. ATS has been equipped with the Magnetic ride control shocks allowing the car to not to get the traction. It gives much room for smooth driving.

Michelin 225 / 40R – 18 Primacy has been used in the ATS. But unfortunately, it has become a catch in the road grip of the car. During the test, the car was supposed to stop at 155 feet when breaks were applied from 70 mph to zero, but it stopped at 167 feet.

Apart from the wheels and tires, it has the DRL, smarter bumper integration giving much of the assistance to the coolants with the netted opening. Especially for the 3.6 L V6 a dramatic shape, much more like a presidential vehicle is offered.

Being in the class of luxury vehicles, Cadillac offers the comfortable and elegant furnishing of the car. ATS has stitched leather seats, with the application of the Sapele wood hoods. It has classy steer wheel and shinning surface gives wonderfully a royal look.

But for all worries, the Cadillac ATS was expected to have a comfortable seating capacity at the back. But it has some savvy measurements, given not much space for the adults of 6’ height. Though the mastering has been done, allowing the provision of some handpicks of comfort and leisure.

Macintosh Apple infotainment system which is called the Cue System is a remarkable improvement in Cadillac ATS. The revised system is capable for operating Android. The Cue System supports the 4 – G LTE Technology with the hotspot and Wi – Fi facility.

For the real driving practices, the Cue System can become a catch of the ATS. If the driver gets caught over something enchanting on the screen or gets stuck with some navigational option, he might lose the control of the road and might cause some awful situation.

Driving sensors have been installed in the ATS 3.6 L which intimates the driver about the need of the all – wheel – drive.

The radio sensors offer the blind spot heading indication and save from possible RTAs. If caught over the Cue System, the lane – keeping assist alarms when the car deviates away from the lane. Don’t miss the real aspects of safety. The ATS is fully equipped with the air bags, parental locking system, and theft control, and immobilizing system.

Cadillac ATS 2.0 L ran with the BMW 328i. The difference of the trap speed noted between the two vehicles is 2.9 miles. Though the performance schedule for the both cars is identical but Cadillac misses the gap because of its transmission system. Still, there’s nothing much of the difference between the two.

While Cadillac 3.6L gets the BMW 335i from the competition. Both the BMW 3 Series are the challengeable competitors of the Cadillac ATS. And there is nothing much different between them apart from the price.

When choosing a sedan for the domestic elements or a coupe for the luxury drives, then ATS won’t be a bad choice. Though it needs some aspects to work on, but still it gets the 90% global rating.