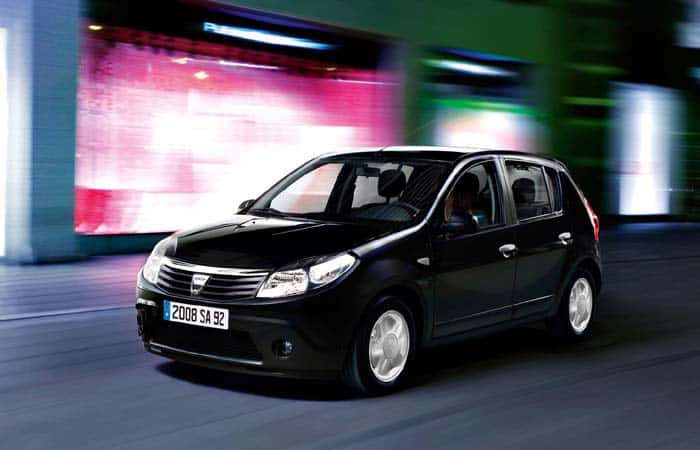 The automobile production is generally the homogeneous combination of different brains. Some act as the performance producers while the others work for the design. Among those, there are some who appoint the interior.

Well, there are some cars that are designed by two or more than two automobile producers. And one such present-day car is the Dacia Sandero. It is the production of the renowned Renault and Dacia. This car was introduced in 2007 for the daily rides. It featured small factor powertrain with lower maintenance cost and higher mileage. Well, this car was introduced for the South American, Mexico, Russian, African and the South Asian market.

Well, the present day Sandero is available in three different models. The base version is notable as Access and it is priced at $8,390. The Ambiance is the mid-level trim having a price tag of $10,350. While the Laureate is the finest model of the whole series bearing the price tag of $12,027 only. Further, the design and the structure is simple. But the whole emphasis in on the performance.

The Dacia Sandero features the gasoline, LPG and the diesel drivetrains. The gasoline is the standard drivetrain for this car. Well, the base version comes with the 1.0 L 3-cylinder gasoline engine. This is the pet version of the Sandero with 72 ponies making 72 lb-ft of torque.

If you want to go wild, then go for the 0.9 L 3-cylinder turbocharged gasoline engine. This powertrain gets a good set of 89 horses revving at 103 lb-ft of torque. And nevertheless, this is the performance version of the Sandero series. Well, this powertrain loads from 0-62 mph within 11.8 seconds. And unexpectedly she makes 107 mph. Certainly, that is because of its less weight and agile structure.

The 4-cylinder Sandero comes with the 1.1 L gasoline engine. This is yet another daydreamer in this series with 74 hp of power with 79 lb-ft of torque. And if you are looking for the liquefied petroleum gas version, then Dacia can offer you the 1.1 L 4-cylinder underpowered Sandero. This is a 73 hp powertrain making 77 lb-ft of torque @ 5,500 rpm.

This is not just all. The Sandero gets the diesel engine as well. It is the 1.5 L 4-cylinder engine available with two tuning levels. The base version comes with 74 horses making 148 lb-ft of torque. And the upscale version gets 89 horses with 162 lb-ft of torque.

Well, you get the 5-speed manual stick as standard. While the 5-speed automatic gearbox with manual shifting is optional. The 4-speed automatic is available for the LPG models. Ahead of that, the Sandero is the front-wheel-drive car, just like the other urban hatchbacks.

See Also: How Often Should I Get a Tune Up

The Sandero carries a decent shape. But it is certainly a basic design with common cosmetic ingredients. Well, the design features halogen headlamps, steel wheels, manually adjustable mirrors and a basic rear. The upscale version features some modern-day cosmetic. Like it gets the electronically adjustable and heated side mirrors, DRL and fog lights. Further, the Dacia narrates that Sandero has the aerodynamic application on it. While that stuff is just fine enough to keep the Sandero on road.

The Sandero gets some basic ingredients for the interior setup. The base model gets the cloth seats and the carbon fiber for the accent and trims. The same goes for the mid-level version. While the upscale model comes with the Aspira leather accent trim and the Indite cloth seats. Further, the Sandero has sufficient space for four people including the driver. While in the rear seats you would not prefer fitting in 6-feet tall adults. In addition to that, the cargo offers 11 cubic feet of space with the seats up. And when you put the rear seats down space goes up to 42 cubic feet.

The base model Sandero comes with a basic radio and music player. While the upper trim versions get the touchscreen infotainment system. This system features telephony, multimedia, Bluetooth connectivity, and streaming. Further, 2 front speakers are included in this package. Well, the upscale version comes with the performance monitor. The system displays drive range, mileage, traveling, speed, and navigation.

The Dacia Sandero comes with the frontal driver and passenger airbags. The passenger airbag is to be disconnected manually when the front passenger is a child. Further, the Sandero has some active safety features as well. It features the electronic stability control, hill start assist, tire pressure monitoring system, braking assist, and anti-lock braking system.

We have the Ford Fiesta as the competitors of the Dacia Sandero. The Fiesta is a bit powerful car. And it has the enhanced definition of exterior and interior setting. But the scope of Fiesta is limited to certain markets.

While the Sandero is available in some major developing territories. Well, the low price and cheap maintenance make the Sandero an ideal family car. On top of that, the performance makes it an enjoyable ride.