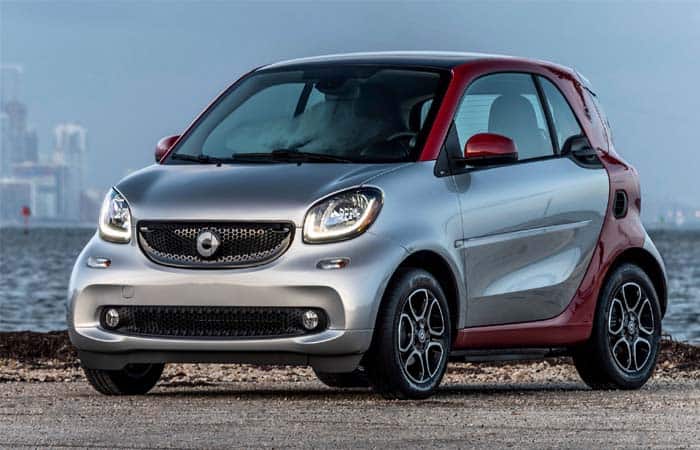 Who says that Daimler only invests in luxury brands? Well, for all those who believe that Daimler is the pioneer of Maybach, would be amazed to know that; Daimler even invests in tiny city cars.

Well, we are talking about the Smart ForTwo. She is the youngest sibling in the whole series with some tiny looks and incredible power. And that is because she is indeed the cousin of Mercedes.

The Smart ForTwo was born in 1998. She was introduced as a savvy city car with lower maintenance cost and higher mileage. Initially, it got fame as the Smart Car, but later she was known as the Smart City Coupe.

Since its first launch, the ForTwo has been through three different generations. And all of them had been impressively successful. The first generation ended-up in 2007 with a good market response. The second generation rolled up till 2014 with the introduction of the electric ForTwo and the Brabus sports package.

Well, the present generation is the third generation. It is the based on the development of the previous generation. And along with that, it has some own introductions as well, such as the Cabriolet (convertible).

The Smart ForTwo is marketed in 37 different countries. The notable among them are the US, Canada, Australia, Japan and China. And she is among the famous economic cars of the world. Well, this attracted a controversy that Chinese are making a copy of the ForTwo. But later a number differences were found in both the cars.

The base version, ForTwo Pure Coupe is offered at $14,650. Further, the Passion, Prime , and the Proxy are the upscale versions. And the Proxy is available for as low as $18,480. Well, let’s go ahead and explore this car.

The controversies were answered through the performance details of this car. The ForTwo is a rear-engine car with rear-wheel-drive configuration. While the controversial car is totally different.

Well, its emphatic drivetrain is powered by 0.9 L inline 3-cylinder engine. It has been a long time Mercedes manufactured such a tiny engine. But to back its powering representation, the Smart ForTwo gets a turbocharged engine. Further, the power ratings are 89 hp with 100 lb-ft of torque. And it runs with the 5-speed manual transmission. Away from this, there is a single speed automated manual transmission system available as well. And that is what makes it resemble like the Twist-and-Go bikes.

Besides the conventional muscle, Mercedes had been EcoBoost technology with Ford. They were planning to bring in a bigger drivetrain with lower fuel consumption. But that is still underway.

The ForTwo is quite sweet. The way it moves, it attracts the driver and the passenger. She is soft, agile and quick. With her turbocharged engine, the ForTwo is capable of launching from 0-62 mph within 10.2 seconds. Well, that is pretty fine for such a tiny beauty. And besides the acceleration, ForTwo marked her best at 97 mph.

This same configuration goes for all the models in the series. Well, the handling is quite comfortable. Her turn diameter is enough to take sharp turns and maneuver swiftly. But on the highways, the ForTwo is just a rough companion.

The ForTwo has some basic appearance and smaller structure. The frontal design measures 65-inches and the rear are 56-inch long. While she is 106-inches long, which is certainly shorter than the standard hatchback. And she is 61-inches high. Well, these measurements are much like the Kei cars of the 1980s. The similar measurements were the part of the Mini Cooper. Further, the manual ForTwo weighs 2,094 lbs. While the automated manual transmission gearbox adds 54 lbs of weight to the car.

The ForTwo comes with the 15-inch steel and alloy wheels, halogen lamps and hard roof. The cabriolet has everything in common besides the roof. It gets the soft top because she is the convertible version. While Brabus brings sporty configuration to the ForTwo with 16 and 17-inch alloy wheels and more ground clearance.

The ForTwo has pretty basic kind of interior setting. The cloth seats, 3-spoke steering wheel, power windows, sunglasses box, cup holder and lockable glove compartment are all the ingredients of its interior.

Well, optionally you can available handmade leather upholstery, all-weather mats, adjustable seats, cargo storage and retractable cargo cover. Further, the spacing is just fine for two. And ForTwo means For Two people only. You cannot get more than two people in this car. Try tying them with the rear of the car.

The Smart ForTwo gets the center entertainment console for the music and radio. Further, it gets the 3.5-inch color instrument panel. The center console offers the Bluetooth connectivity, streaming and telephony. And the console could be pulled out to get another compartment in this car.

Besides, there is an air-conditioning system with automatic climate control. Well, this is something really finest as you do not really get these much features in basic hatchbacks.

The Mercedes has not compromised on the safety of this car. Though it is a small and cheap economy car, it comes with some handy safety features. First, of fall, the ForTwo is comprised of the reinforced steel with reduces the impact of the collision. Further, it has 8 airbags installed in it. In addition to that, the ForTwo comes with electronic stability control to balance every move of your ride. To make it safer the anti-lock braking system has been added to it. While Mercedes even knows that ForTwo is too much small for large freeways where winds can misbalance your car. That is why the ForTwo comes with the Crosswind Assist that assists you in keeping your car on road.

We have too many examples to fit in the competition with ForTwo. But the closest we have is the Fiat 500. The 500 is even a small tiny car with plenty of savvy specs. But it takes the lead pretty easily because of its agile drivetrain with various powertrain options.

But still, you cannot underestimate the Smart ForTwo. She is a good city fella with plenty of features to offer. By the way, you can even get an entry-level sedan at the price of ForTwo.