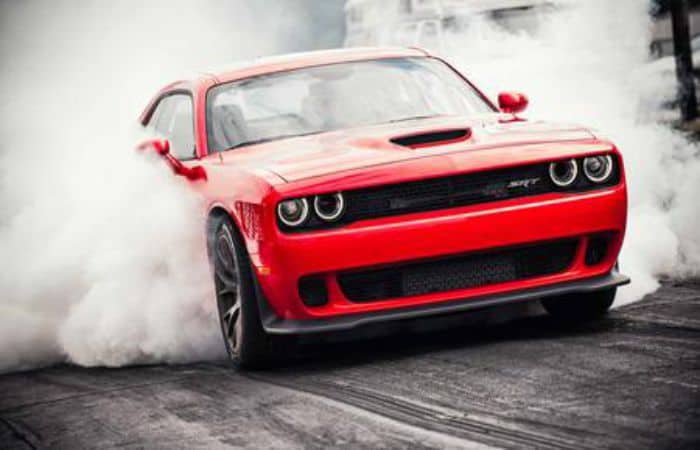 The SRTs, Hellcats and SRT Demons lay enough fire to create another hell. These are actually a hell of a muscle car. While the other variants of the GM borrow the SRT badge for their performance machines.

The SRT Hellcat is a conventional Challenger. Although it has the similar body styling, interior and mechanics. But everything has been improved to accommodate the monstrous Hemi V8 engine.

Well, the Dodge Challenger has a sibling as well. It is not from its own series. Instead, it is from the Dodge, the Charger SRT Hellcat. Beside the exterior and interior design, both the SRT Hellcats share the same drivetrain. And even the performance of both the vehicles is same.

The term Muscle car is actually extracted from the performing machines of the past. The Voodoos and the Sabers carried massive engines to organize a power show. But the base models of the muscle cars today could mere show some performance. That is why the cars like Challenger SRT Hellcat are launched.

This was the 8-speed automatic SRT Hellcat. The launching was perfect. It took 3.6 seconds to roll from 0 – 60 mph. And at the 11th second, we reached the quarter mile. Thanks to the Pirelli Drag tires, that allowed us a good 0.3 seconds jump. Otherwise, the stock tires take some way above the 11 seconds.

Finally, after moving through a long straight strip, we reached 201 mph. While we were told that Challenger SRT Hellcat can touch 202 mph. And the Charger cannot do that because of its massive weight. But still, we pry out to reach this segment. Well, first we would thank Dodge for bringing in the Hemi V8 in the Challenger series. This 6.2 L supercharged monster has 707 hp of power at 650 lb – ft of torque. This is certainly a well-stated performance.

During our test, we moved this monster into the urban streets. The handling was perfect. It felt quite soft and swayed with every swing of the steering wheel. And ultimately there was the time when we had to bring this muscle to rest. Thanks to the huge Brembo brakes that can stop this car in 109 feet from 60 – 0 mph.

But still, it felt much like we were driving the Dodge Charger SRT Hellcat.

The Dodge Challenger SRT Hellcat is styled like the other Challengers. But it has some differences that are actually made for the Hemi V8 engine. Like, on the front, the inner lights have been removed to make a ventilator for the engine. This helps the engine cool timely, and respond promptly.

The next big change is the wheels. The SRT Hellcat gets the 20-inch alloy wheels. The standard is matte black forged slingshot wheels. While a number of optional wheels are available for this car. The front grille features the retro design of 1971. It has the similar splits like the one in the 70s.

The bonnet gets a huge hood. It is yet another engine coolant. And somehow, it even participates in the aerodynamics of the SRT Hellcat. Well, Dodge has really created a beast. The SRT Hellcat is wider than rest of the models of the Challenger series. It is mainly because of the huge 6.2 L Hemi V8 engine.

Well, the styling does deserve a full round of applause.

The interior of the Challenger SRT Hellcat is certainly parallel to the other models of this series. But it is sportier than they are. Rather, it hosts an upscale interior. But still, it is a Dodge Challenger.

It has sportier seats and a different coloring schedule. Like the color, the contrast has a variation for a darker cockpit. Even the sound system is really awesome in this Challenger. But there is not much difference available in the interior. Yeah, in a way, it is wider than the other model of the Challenger series.

Well, the Dodge Challenger SRT Hellcat does have the retro design. But it does not mean that it is an outdated car. It has everything that the modern cars have. Like it comes with the 8.4-inch Uconnect infotainment system. Along with that, you get your very own driving tester that makes you record your lap scores. Further, the SRT Hellcat has the 7-inch driver’s cluster display with customizable options.

The key fobs are the most lovable technological features of SRT Hellcat. The Black Key fob restricts speedy driving. The Challenger SRT Hellcat delivers a maximum of 500 hp with this key fob. While the Red Key Fob enables the full performance mode.

Well, the SRT Hellcat even have some distractions. Like the speedometer falls almost 7 – 10 mph short to the actual speed.

Unlike the old muscle cars, the SRT Hellcat has everything to keep you safe. First of all, it is the driver’s own responsibility to drive safely. But the automobile companies know that driving enthusiast at time misses the cautious driving.

Well, the Dodge Challenger SRT Hellcat has pretty fine passive safety inventory. It has ample amount of airbags, seat belts are good and occupant safety is fine. Along with that, you get a number of add-ons for the active safety. While on the standard you get the cruise control, dynamic controls and grip match.

If you are a retro muscle lover, then Challenger SRT Hellcat could be a good choice. But if you need some real power deal, then look for some other options.