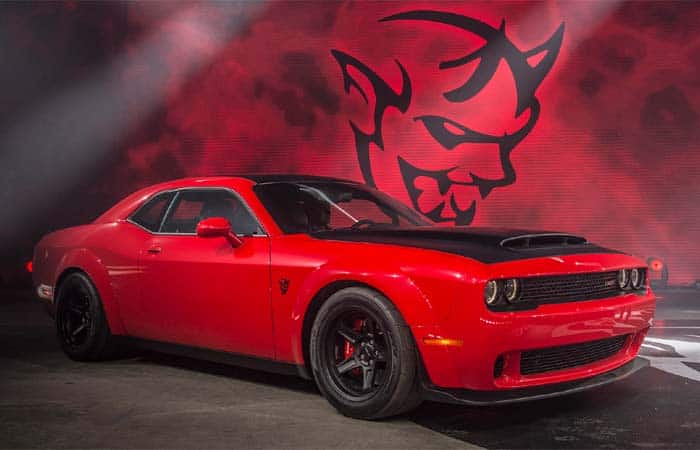 The challengers could be powerful, strong and enthusiastic. Challenges are composed to be taken over by the challengers. But at times, the challengers wear the cloak of demons. They become demonic. While in some cases, there ought to be some challenging demons that are worldly.

The Dodge Challenger was living on the edge till 2017. But as soon as the word came up for an upcoming Demon, a new spark of challenge arose. That was the spring of 2017 when Dodge displayed the Challenger SRT Demon for the first time during the New York Auto Show. Though it was already announced that Dodge is up to launch something more powerful than Hellcat. But it was not sure that what it would be until their first press release.

Well, Hellcat is something like a monstrous cat roaming in the Hell. But Demon is more like a giant that controls every type of Hellcat.

Though it is a demon, still it is a challenger. It has too much similarity with the other models of this series. The exterior, interior, performing mechanism, platform and technology all are quite same. The only thing to be different is the tuning of the engine. Even the drivetrain is the same as that in the Hellcat.

Well, there is too much to find in this car. Like, its performance, stunts, dynamics and a lot of other things. And there is too much to know about it as well. Like the NHRA (National Hot Rod Association) banned the Dodge Challenger SRT Demon from Drag Racing. The SRT Demon is practically built from drag racing but it is not allowed to do that because it does not meet the drag racing safety standards.

The Challengers had been impressively powerful. But mainly they were not the street legal cars. With time, the passion for the muscle car reduced because of their lethargic performance. People moved to the ultra-muscular sports cars, and retro was left behind.

That has certainly affected the progress of the muscle cars. And the automobile manufacturers started to tend away from this concept. The Challenger SRT Demon showed a bright side to the muscle lovers once again. Instead of choosing aftermarket equipment to power-up their cars, they would simply get everything from Dodge.

The Dodge Challenger SRT Demon is powered by the 6.2 L Hemi V8 engine borrowed from the Hellcat. Well, that is a pretty impressive difference in the performance of both the cars having the same engine. The Hellcat has 707 horses while with the same engine the Demon has 808 horses. Indeed, that is 101 hp of more power because of the 2.7 L Supercharger. Yeah, that is why it is a Demon, the one who leads the hellcats.

With these 808 horses, the Demon makes 717 lb-ft of torque. Well, the Demon is not limited to 808 hp of power. If you get the Demon Crate Package, you will certainly add 32 more horses to your car. While the torque remains unchanged.

The Dodge Challenger SRT Demon is the first ever street legal car that can naturally perform a wheelie. Well, that becomes obvious when a car gets such a powerful engine with a rear-wheel-drive, it would certainly hand the front wheels. Ahead of that, the challenger recorded its quarter-mile within 9.65 seconds. This is even faster with a street legal (stock) drag car. Indeed, the Demon is built for the Drag Racing.

There is nothing much different in the Demon and the other cars from the Challenger series. The Demon is wider and more aggressive as compared to its siblings. It gets a wider hood, drag racing tires and the composed wheels to fit in the aerodynamic wind tunnel of drag pit. The body styling is perfectly suitable for the drag racing. Indeed, every bit of aerodynamic in this car is purposely built to attract the dragsters.

The widened rear does have everything in common. Well, the spoiler looks same, but it is different than its siblings. It sits to adjust the wheelie capability of this car. Certainly, it makes sure that the Demon does not derail.

The aggressive appearance of the SRT Demon is impressive. And even the width of this car really makes it a hotshot. Indeed, this is the true muscle car!

The interior design is fine and quite similar. But it is weird that Dodge removed the passenger seat from a street-legal car. It is not on a track, and not even barred from riding on streets and roads. But this kind of room is pretty awkward when you have to take your girl for a sprint.

But no worries still, as the passenger seat is optional. It is not totally prohibited. The first introduction to this car without a passenger seat was pretty strange. But once we got that seat, it smelled the same challenger with the sporty instincts. The seat or the seats are comfortable. And the accent trim along with the steering wheel has premium ingredient. Certainly, the interior is awesome. But still, we missed the passenger seat.

The Dodge Challenger SRT Demon comes with the Uconnect 8.4-inch touchscreen infotainment system. The radio, audio, Bluetooth streaming and voice recognition is available on this system. In addition to that, the SiriusXM radio is also available for the SRT Demon.

It is a pretty similar system like on the other Challengers. Just bit of appeal and appearance is different.

The NHRA rejected the entry of the SRT Demon into the drag racing. There had been a lot of bashing done by Dodge over NHRA’s decision. But it was never disclosed that why NHRA did ban the SRT Demon.

A car that can run the quarter mile in 9.65 seconds should have the safety standards accordingly. But, the SRT Demon does not have that. Ultimately it did not meet the safety measurements of the drag racing.

Though it has everything that could declare it as a safe city car. But for the tracks, it should equip the rack cages and the other safety requirements.

How could an underrated Ford Mustang Shelby GT350R rank better than the SRT Demon? Well, first it has enough passenger seats. Then it has subtle safety requirements. And finally, it is almost 30 grand cheaper than Demon.

Do you want to be a drag racer and something that would help you win everything? Then go for the Demon. But make sure you make your car safe before you hop in.