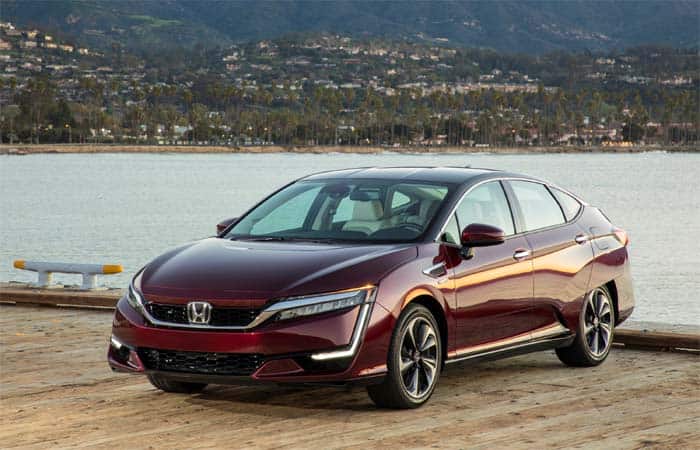 Honda has been working alongside other Japanese automobile companies to develop alt-fuel vehicles. The Toyota Prius could never be forgotten as it laid the base for the alt-fuel cars. But besides Prius, there are even a number of other developments that are based on hybrid technology.

The Honda Clarity is even one of the hybrid and alt-fuel cars. It is the development of the 21st Century. Though a late production, but have multiple options for fueling. This car was introduced in 2007. The initial launch was the hydrogen-based electric Clarity. Well, the sales were certainly pretty limited. But a number of inquiries were made about the development of this car.

In 2016, the Clarity was introduced with a different powering structure. It was no more just a hydrogen-based electric car. Instead, it offered multiple options. The base is still the hydrogen fuel cell. But in addition to that, there is even an independent electric vehicle available in the range. The all-electric was launched in 2017.

Besides these models, there is even a Plug-in Hybrid version available for the Clarity. It was planned for the year 2017. But now it will be launched in 2018.

Well not to forget, the Honda Clarity is only available on the basis of Lease. No full payment sale is available. Well, the Clarity fuel cell is available for a 3 years lease at $369 per month with $2,868 as signing fee. But you have to be living near a hydrogen station.

And if you wish to go for a Clarity Electric. Then you can get it for $269 per month for three years with $1,999 as the signing fee. Well, these are the future of automobiles. And even a way to reduce pollution.

The Fuel Cell Clarity performs the same as it did before. It has 130 kW electric motor, equivalent to 170 hp of power. It utilizes the hydrogen as the fuel. And it maxes till 366 miles. This is one of finest hydrogen car range recorded by the EPA. Its consumption is rated equivalent 67 on gasoline. And as usual, it is the mixture of the hydrogen and electric power.

The next we have is the plugin hybrid vehicle, which is yet to be launched. It was expected for the year 2017 but due to some reasons, it will see the face of the market in 2018. The tests so far conducted proved that it can go up to 42 miles on electric and then converts to the gasoline. It has the 1.5 L gasoline engine.

The All Electric has been launched in the present year. Well, it just a kind of lethargic introduction of the Honda Electric cars. The Clarity Electric has one of the highest maintenance cost among its class. This car covers around 89 miles on a full charge. And then you have to charge it again for around 9 hours for another round. While the expected expenditure is summed around $35,000 – 40,000. When you already have Chevrolet Bolt EV making around 200 miles on electricity, then you might think about a car hovering less than 90 miles.

The Honda Clarity looks like a redefined Honda Accord. It has the similar shape but it is a bit shorter than Accord. The design is pretty decent. There no such funk of sports and performance. Well, in a way Honda has tried to design Clarity as a space-age car. But it is still and earthy-ware.

There is not much application of aerodynamics. It is not like it does not have anything such. But it is like it is just doing something with aerodynamics. You must have seen the Honda Insight. The rear seems like it has been copied from that car.

The headlights have been beefed thinly. It is certainly to categorize Clarity from rest of the cars from Honda. Well, we have seen such in Acura NSX. Further, Clarity comes with 18-inch alloy wheels. Well, Honda says that they are aerodynamic wheels. While the wheels look like they are the air choppers.

Honda is not much choosy about the interiors of its cars. Instead, it keeps an eye on making the interior spacious and comfortable for every ride. Though it does not bring in much luxury, it makes it eloquent for a smooth journey.

The interior details in this car resemble Accord. Well, the Clarity is pretty silent inside. You hardly hear someone outside. Further, the rear and the front are pretty spacious. In a way, you can fit in 5 people in this car. But make sure none of them is too much obese or too much tall.

Honda Clarity is claimed to be a germ-free car. This is something more than mechanics. It is actually biology. The Clarity comes with the Plasmacluster Ion Technology which kills all the germs in the car. And makes the climate zone to deliver fresh and healthy air. Certainly, the climatic system to deliver scientific air.

Well, Honda has added some luxury details in this car. And mainly they are just for fun. By the way, the cup holders are amazing. You can adjust them according to the size of your cup.

The Clarity is one of the luckiest Honda. It does not have the same infotainment system like the other Hondas and the Acuras. Instead, it has a pretty stylized telematics. Navigation, audio player and the vehicle information are available in the system. Further, it has the Android Auto and the Apple CarPlay.

The Honda Clarity has a pretty cool driver’s cluster. It is quite easy to understand. Even the functionality looks cool. Indeed, Honda has spent some budget in developing the telematics technology of this car. Unlike other Hondas, the infotainment system of this car is pretty prompt and responsive.

A car with hydrogen fuel is more like a running hydrogen bomb. Before the safety of the occupants, the fuel safety is mandatory in such cars. Honda has designed Clarity in a way that the fuel would not burn and would not even spill out in case of any collision.

Then comes the safety of the passengers and the driver. The Clarity is quite clear in terms of safety. There are ample amount of airbags in the car to ensure the safety of the occupants. And even the car’s frame offers relentless protection in case of an impact.

It was pretty hard to find a competition for an alt-fuel car. But thanks to the developing automobile companies that they have created rivals for each other. Well, the Honda Clarity gets the competition from the Nissan Leaf. The bigger battery and more range of Leaf make it rank higher than the Clarity.

The Clarity will get the highest rank among the alt-fuel cars if Honda invests more on its performance. It has everything a city car should have. But its drive range makes it rank lower than its competitors.