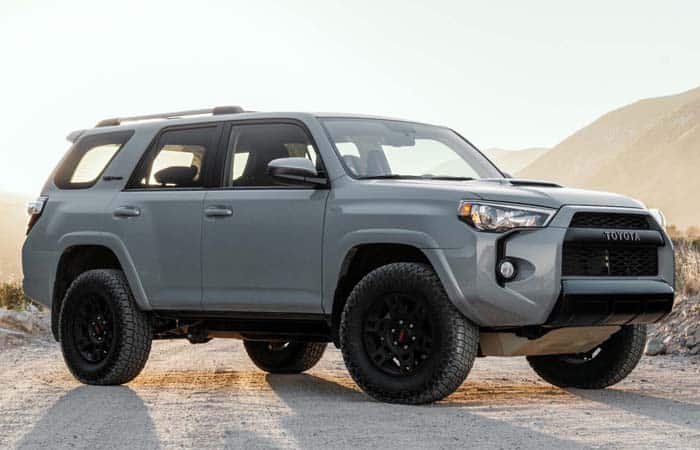 The majestic rides have their personal prestige. They ride with the passion of utmost glamour. And the rest as the silent beasts in the hollows of mystic peaks. The Toyota 4Runner is one of the waking majestic rides from the Japan.

The 4Runner was discovered in 1984. It was a compact SUV than. But with time it grew to the mid-size SUV. And soon it will develop into a full-scale monstrous SUV. This vehicle is even known as the Toyota Hilux Surf. And the Toyota Fortuner is certainly its direct replacement in South East Asia.

The 4Runner replaced the short-lived Toyota Trekker. After the Trekker was discontinued, the 4Runner was introduced. But it looked similar to the Toyota Pick-up truck, having its bay area covered. Well, the market response was not bad. Even a number of military organizations acquired the Toyota 4Runner because of its utmost power and reasonable price.

Well, after two successful generations, the 4Runner was introduced as the mid-sized SUV. And since then it is going on like that. Even the exterior design has been drastically changed. The present-day 4Runner is living in its 4th Generation. This was introduced in 2009. And the last improvement it had was somewhere around 2015.

You can acquire one of these for as low as $34,410. The available models are SR5, SR5 Premium, TRF Off-Road, TRD Off-Road Premium, Limited and the TRD Pro. Well, Toyota 4Runner Limited is the most expensive model in this series. It starts from $42,725.

A car with such details and specs is likely to attract a fabulous market response. But the SUVs in North America are far more powerful than the 4Runner. And here we have got some serious off-road lovers, who certainly need monsters.

The Toyota 4Runner had a pretty comprehensive drivetrain once. But now it is just available with a single engine. The present generation had 2 engines in the beginning. But the smaller powertrain had been discontinued in 2010.

Now, the 4Runner comes with the 4.0 L V6 engine only. This powertrain offers 270 hp of power with 278 lb-ft of torque. Further, it has the Variable Valve Timing, which comes handy during the speedy driving. The 4Runner is certainly under-power but it has some performing DNA.

We expect lightning performance from a V6 engine. Even if it is an SUV, it should bring up something compelling. But the V6 in 4Runner is just an ordinary companion. It makes the 0-62 mph run in 7.5 seconds. The Dodge Journey is just 0.3 seconds slower than 4Runner. Further, the track best of 4Runner is 114 mph. And this is even an ordinary performance.

The most amazing part we in this car is the availability of 4-wheels drive. Well, the 4×4 is optional for this car. And, if you expect performance from this car. Then simply go for a 4×4 4Runner. Well, that is even the most selling version of this car. Why would anyone get an SUV when it has a primitive performing tools? Why not just simply go for sheer power and control.

Well, we do not have any complaint with the handling capabilities of this car. It steers fine and has a decent braking system. But we are not going to compare it with the off-road monsters.

The Toyota 4Runner has an aggressive exterior design. By the way, the design seems pretty obsolete. It does not have any appearance like the present day SUVs. Well, that is another catch in this car.

The grille design for the base model is quite basic. But when you go up the range, you get the chrome and aluminum grilles. While the TRD Pro has the most aggressive grille design in the whole series.

The 17-inch wheels are standard for the 4Runner. But the Limited Edition gets the 6-spoke 20-inch alloy wheels. Moreover, there is some application of aerodynamics on this car. But it is not that much eloquent to make 4Runner run fast.

The 4Runner is pretty spacious inside. There is plenty of space to get in almost 7 people in this car. But it does not have much of luxury available on it. Certainly, it is a pretty static kind of interior. In a way, it seems like an outdated interior appointment.

Cloth seats are standard on the base models. The SofTex seats are available on the mid-level trims of the Toyota 4Runner. While the elder trims are blessed with the leather seats. The TRD models get the TRD badges on console and steering wheel.

The rear has plenty of space to carry luggage for a whole week stay. It has been designed to cater the cargo for the picnic stuff. You can get you camp, edibles, and clothes in the rear for a weekend trip.

Well, if we have to consider 4Runner as a luxury option, then we will have to think twice that is it really luxury?

The Toyota has not really much on the exterior and interior details of 4Runner. But it has blessed this car with a 6.1-inch infotainment system. It is powered by the Entune system. Well, navigation, telephony, and music are standard on this system. But if you need an enhanced navigation system, then you will have to opt the Entune Premium Audio. Well, if you need some better sound system for your car, then there is an option for the JBL audio system.

Further, Toyota offers some security features for the 4Runner. It comes with stolen vehicle locator, Anti-theft system, and engine immobilizer. Well, that is a useful feature added to this car.

The safety standards of 4Runner are quite diligent. It has a number of passive safety equipment installed. And even the body structure is rigid enough to reduce the impact of the collision. The 4Runner has the side impact door beams to minimize the effect of the collision. Further, it has 8 airbags and LATCHes.

Besides, it has cruise control, vehicle stability, and traction control. The driving assistive features include the tire pressure monitoring system, sonar radars, and the reverse cameras.

See Also: Best Cars Guys Use to Pick Up Girls

This Japanese car gets the competition from Germany. The Volkswagen Touareg is the closest competitor of the Toyota 4Runner. Well, the performing capabilities of both the cars are similar. But the exterior and interior design of Touareg is quite advanced as compared to the 4Runner.

Well, if you are employed in an embassy in Africa or South Asia, then you might experience the 4Runner. While for your personal ride you will certainly prefer a different option.