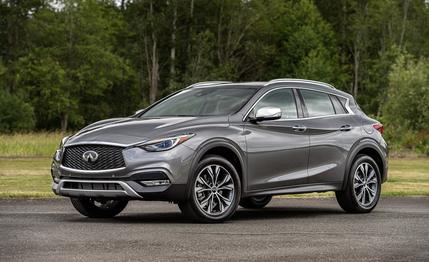 The Nissan’s Infiniti is one of the fabulous luxury car division. Since 1989, the company is presenting amazing cars. The car we are having today is the Infiniti QX30, which has been recently launched. QX30 has no predecessor in line, but it is mostly based on the concept of Infiniti Q30.

The Crossover and SUV market extensively increases every now and then. And generally, most of the SUVs resemble each other. But the versatility of QX30 is that it has a unique body styling and immensely comfortable interior.

As per the customer of luxury and comfort, most of the cars of Infiniti are remarkably luxurious. Similarly, the Infiniti has maintained its standard in the QX30. Not just the comfort, the powertrain of the car is evenly fun to drive.

The least price tag on the series is of $29,950. The first exhibition of the car was conducted in the Los Angeles Motor Show in 2015 and then in Geneva Motor show in 2016. By mid of 2016, the USA and Canada got their first release. While the rest of the world will get the initial release of Infiniti QX30 in 2017.

The available models are titled as:

The gasoline drive train is the 4 – cylinder turbocharged system. While the diesel configuration has the standard tech. The European consumers were getting the diesel machine earlier, but by 2017 they will even enjoy the turbo charger.

Not to mention, the powertrain used by Infiniti QX30 is even shared by Mercedes in one of its Crossover model.

The road test revealed some different tale. When the Mercedes with the same drivetrain and the QX30 were head to head tested, the results were a bit frowning. The QX30 reached 62 mph within 6.6 seconds, while the Mercedes took 6.1 seconds.

The handling even showed a different story. It has a bit lag in the steering as compared to the other SUVs in line.

Rather there is much of the Mercedes discussed. But it is still more to be discussed. Oh! It’s Infiniti, but it resembles much like the Mercedes. But there is something which makes QX30 unique from Mercedes.

Its grille and the metal which has been used in the exterior of the car makes it worth more alive as compared to its rivals, including its ally the Mercedes.

Some stories narrate that QX30 is an uplifted hatchback. The QX30 in the base model comes with a 1.2-inch ground height and the QX30 Sport is even lower than this. It doesn’t let it to be an SUV anymore. Precisely it could be a sporty looking crossover.

Well, practically Infiniti is rich in material as compared to its ally. The dashboard, steer-wheel, seats and windows all have good material quality. While the seats are pretty spacious, but over a long journey, they seem to be hard to sit on.

It what happens with most of the cars that back row passengers don’t get much room. As per prescribed by manual, 3 people can sit in easily at the back. But practically only 2 can sit easily. One of the major catch found in the rear seats is the entrance panel. Usually, the lousy passengers would hit their head in the pane while entering.

And let’s now get to the trunk. It is just 19 cubic feet spacious. Relatively is quite shorter than a number of sedan and hatchbacks available.

The interior gets more beauty with the Bose Premium Audio system. It has 10 speakers, USB ports and amazing sound.

The Infiniti QX30 has maintained a good standard of safety. It has almost all the necessary safety particulars, such as the air bags and belts. Besides the necessary features, it even has the driving assistive features. Such as the Lane Departure Warning, which helps the driver to be aware that he or she has moved out of the lane. On top of that, there is Around View Monitor in QX30. It enables the driver to learn about any stationary or moving object in the surrounding of the car. It is practically quite helpful to know about anything that is present in the blind spot.

The Infiniti QX30 and the Mercedes-Benz GLA Class share almost all of the architecture. Whether it’s the drivetrain, chassis or structure is certainly common in both the cars. But Infiniti and Mercedes remain as they are in their places, the all spectacular and all delivering. But with some performance records, we get the Mercedes over a higher rank.