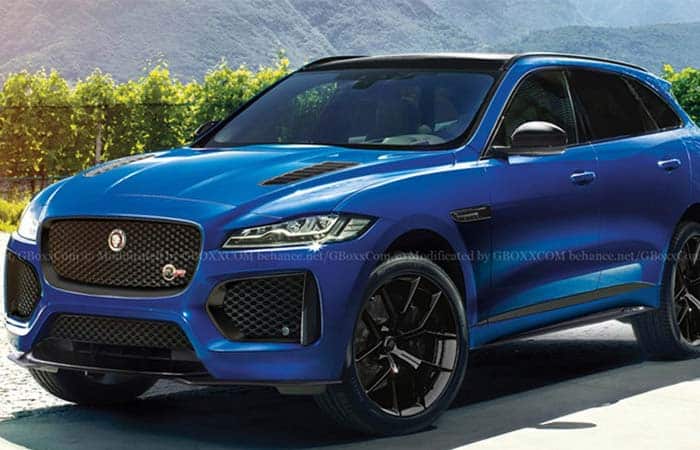 Jaguar has only inducted the SVR tag to a couple of vehicles, making them the performance variant for their respective series. Well, the first one, F-Type (SVR) is notably famous among all the performance machines. While during the same days, Jaguar started playing with the F-Pace, a compact crossover SUV that was designed for luxury. Subsequently, the SVR badge was added to the model that was worked out. Besides, no other vehicle has yet received the SVR badge. But there is another SUV that earned this badge, while it is not a Jaguar.

Well, that was pretty much required, because the competition was growing hard. And none of the F-Pace were enough capable to deal with the competition. In the meantime, the F-Pace SVR came out. The looks and styling had nothing much new, besides a slightly revamped interior and some sporty notches on to exterior style. But the only thing that created the difference was the powertrain. Completely borrowed from F-Type R with only a few differences that were not suitable for an SUV.

The F-Pace SVR performs like a Jaguar’s coupe but looks like an SUV. Indeed a fantastic job by the Special Vehicle Operations (SVO). But might only attract the guys that are interested in buying an SUV that drives like a sports car.

Jaguar asks $79,990 for a base level variant. But after some necessary taxes, the price jumps to $80,990. While if you add in some amenities like some convenience item in the interior or tweak the exterior, the price would surely cross 90K.

Inside the Jaguar F-Pace SVR is a 5.0 L V8 supercharged engine, fully packed to roll tons of power. Well, as considered earlier, it is the F-Type machine, used on a couple of other SVR models. Even the power out rates the same.

This 542 hp machine is capable of producing 502 lb-ft of torque on around 2,500-5,500 rpm. While it comes equipped with the eight-speed ZF 8HP automatic transmission and the switchable active exhaust system. Further, the driving feel is same as that of the F-Type R. And the prominent differences are some handling specs and the shyness of the F-Pace SVR for completely behaving like a coupe. But the all-wheel-drive is indeed helpful in removing some shyness.

Ahead of that, the suspension has been tightened up and the shocks are made stiff. Along with that, the dampers have been made more adaptive compared to the rest of the models in F-Pace. And evenly the size of the brakes has increased to 15.5 for front and 15.6-inches for the rear. Additionally, the torque vectoring has been added with the braking, making it easier to take sharp turns. Altogether, the handling has received some decent improvement, good enough to run along the V8 super-machine.

Certainly, the F-Pace SVR is capable enough to surpass most of the Jaguar’s competitors. And in a way, it completely justifies its pricing.

The exterior styling details are identical to the other variants in this series. While the available differences include the larger intakes, bigger vents, and wider fenders. Certainly, the greater structure helps the aerodynamic abilities and the cooling function of the car. It is obvious that when there is such an enormous engine sitting inside the F-Pace SVR, it would certainly require a bigger cooling system.

Ahead of that, the Jaguar F-Pace SVR gets 21-inch forged alloy wheels, sporty SVR bumper kits and body colored door cladding. Additionally, it gets the quad exhaust tips with 3.7-inch finishers.

The Jaguar F-Pace SVR packs an exclusive sports interior. The quilted heated and cooled leather seats and the ergonomic setup offers a splendid driving experience. Further, the SVR badge on the headrest blesses the interior with a superiority appearance. Well, the interior is extremely comfortable, and even it is quite spacious. In total, 5 passengers including the driver can ride this car. Additionally, there is some space available for the luggage, but that is much like storing handbags, satchels or equivalent smaller baggage. Further, a convenience package is available on demand available for 229 bucks. With that, you will get hooks and hangars to carry your clothes along. While if you add 270 bucks more, you can get the premium convenience package that will add a storage compartment for the rear row fellas.

The F-Pace SVR gets the same infotainment system that comes with the other models. But the SVR gets some additional performance features. Other standard features include navigation, telephony, Bluetooth streaming and smartphone, and tablet connectivity. While, a premium sound system is even installed in this car, making it different than the other variants. After all, it is the SVR!

You would have to spend an additional $300 to get the smartphone package, offering Apple CarPlay and the Android Auto.

See Also: What Causes Car Battery Corrosion and How to Fix It

The passive safety equipment is standard. While for the driving dynamics, you would have to spend some additional amount. Well, let’s get into some detail! The driver’s assistance package with some handy features like the blind spot monitoring, adaptive cruise control, and a parking assistant comes for $3,600. A cheaper driver’s pack with only blind spot assist, emergency braking, and the cruise control is worth 1,700 bucks. And the cheapest is the parking assistance package with only some parking aids available for $600. In a way, you need to spend more to be safer.

See Also: How to Clean Tires with Household Products

The Alfa Romeo’s Stelvio will all-wheels moving gets a 6-pack 2.9 twice turbo-charged machine making 505 horsepower. While the F-Pace SVR’s twice bigger engine is only 37 horsepower stronger. And even the Stelvio Quadrifoglio has been tested to run faster the F-Pace SVR. Further, both the vehicles have a similar interior appointment and stylish appearance.

The Jaguar F-Pace SVR is yet to land into the market. And before it has come in, a lot of Jaguar’s competitors have started counting on their forthcoming SUVs. Certainly, the F-Pace SVR is truly a Sports-Utility-Vehicle.