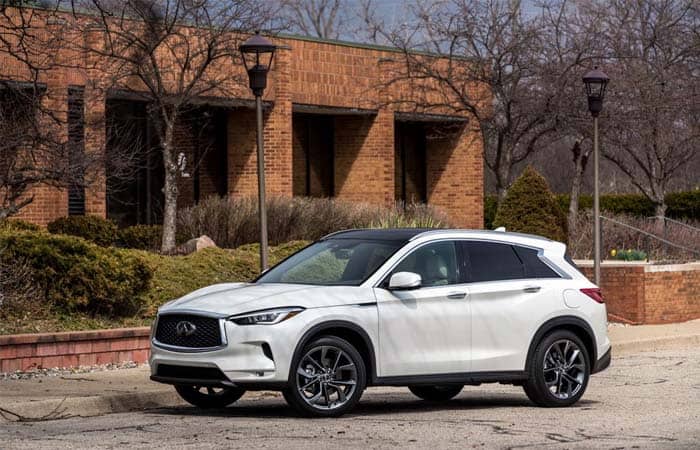 The Infiniti EX once used to be a luxury crossover SUV that qualified under the 10 Best Luxury SUVs. It was a fine car, with a tidy performance caliber and a decent interior. But the EX title only remained in business for 5 years.

In 2013, the company changed the nomenclature, making it rank amid the newly calibrated QX series. And the very new title given to the car was QX50. Well, the Japanese market knew it as the Nissan Skyline Crossover.

Practically this series started off in 2007. While theoretically, the QX50 came out in 2013. Unlike EX, QX50 could not earn an award. Though it has a better driving mechanism and even smoother interior details. But its competitors have grown far better. Certainly, it stands a minimal chance to be acclaimed.

Well, the first generation of the QX50 carried on till 2018. And during the course, it only received a single facelift in 2015. Besides no major changes were made to this car. While this new second generation has an entirely different structure, resembling the other SUVs from the QX series.

The very first display was made in 2016, following an introduction of another powerful concept in 2017. While the production version closely resembles the concept of 2017. It was revealed at the Los Angeles Auto Show of 2017 as a model for the year 2019. And by the end of 2018, Infiniti started booking the deliveries for the new generation.

Ahead of that, the Infiniti QX50 is available in 6 trim levels, beginning with Pure, Luxe and Essential. While the entry-level model is available for $36,550.

The huge V6 engines have been discontinued in the favor of a 4-cylinder machine. And there is no strong performance mechanism available for this car. Well, the second generation gets a 2.0 L turbocharged Nissan KR engine which is evenly put in Altima.

Here this machine makes 268 hp of power at 280 lb-ft of torque. Additionally, it gets the variable compression system which systemizes the movement of the pistons. Ahead of that, the continuous variable transmission is the only gearing system available for this car.

Putting a turbocharger onto a 4-cylinder machine is certainly smart. But still, it would not be able to match the performance ability of a naturally aspirated V6 engine. Well, the turbocharger appears sluggish when kicked from a stop. And it feels like the mechanism is overburdened. But during a steady drive, the system performs smoothly and does not really lag the flow.

The Infiniti QX50 could be expected to launch from 0-62 mph within 6.5 seconds. And the best it could do is 140 mph. Further, it can offer 27 mpg as the combined fuel mileage. Though it seems economic. But some of its competitors could save much more fuel.

The front-wheel-drive comes standard for this car. While the all-wheel-drive remains optional. And the performance rating is almost similar in both the variants. But the fuel economy slightly differs, yielding a better result in FWD.

The QX50 has some very fine handling skills. The steering is agile and neatly packed, making it steer pretty smoothly. But the sharp turns might question the car’s grip. Well, the 0.86 g is the tested road grip with a stopping distance of 164 feet from 70-0 mph.

The exterior has been designed quite effortlessly. Details have been picked up from the other QX models and are adjusted for this car. Like the headlamps design that resembles the styling of QX60, and the front grille which is common on every model. Further, the QX50 features the LED lamps, 19-inch wheels, LED taillights and some other refined cosmetics, taken from its siblings.

The interior is handsomely crafted with premium leather and suede material. Further, the ambient lights and plenty of convenient spots add up to the comfort of the interior. Well, seats are amazingly comfortable that could equally benefit every type of journey. While the best thing is that QX50 offers space for 5 including a driver. Ahead of that, there is even a lot of space for the luggage. Certainly, it could suffice with the package for a whole long journey.

The QX50 gets a dual-screen infotainment system like most of the other Infinitis. Here the 8-inch upper screen is for the navigation. While the 7-inch lower screen is for the rest of the operations, like multimedia and smartphone connectivity. Further, some common features include voice recognition, SiriusXM, smartphone connectivity, Bluetooth and telephony.

A 6-speaker sound system comes standard in the base models. While a powerful 16-speaker Bose Sound System is available for the upper trim levels. Besides, some additional features include the hands-free tailgate control and the remote engine start.

The safety standards have been met pretty diligently. The QX50 includes various driving dynamics needed by the present day drivers. And everything is aligned quite intelligently. First, the passive safety equipment suffices with the standards of safety needs. While the active safety panel includes the antilock braking system and vehicle stability control. Further, the driving dynamics encompass emergency braking with pedestrian detection, adaptive cruise control, lane keeping assistant and the head-up display.

See Also: What Causes Car Battery Corrosion and How to Fix It

The QX50 easily competes for the interior setup of the Audi Q5. Even the exterior styling is remarkable in both cars. But the Audi Q5 can certainly outclass the QX50’s performance. And it even gets a decent notch of drivetrain options.

The QX50 is certainly a fine option if something is needed to show off. Even the comfort level surely sits atop a lot of its competitors. While the performance cannot be much relied on.