The Jaguar is giving a tough competition to the performance cars manufacturers. Dating back to 2008, Jaguar was busy in producing sports tuned family cars. Despite the sports tuning, they were merely the sports variants. Instead, they were the errand runners.

But as soon as Jaguar researched the F-Type, everything changed for this company. These immensely powered performance cars are set to dominate every track. After a successful introduction of the Jaguar F-Type, the company went on to introduce a few more models of this series. During the 2013 Los Angeles Auto Show, the Jaguar displayed the F-Type R in coupe body style. In the same year, the car was displayed at Tokyo Motor Show and Jaguar Academy of Sport Annual Awards. By the Spring of 2014, the F-Type R Coupe was launched in the market.

The F-Type R has earned a lot of fame to the Jaguar. In 2013, the F-Type R Convertible was announced as the Car of the Year during the Middle East Motor Awards. Well, a number of campaigns have been created by Jaguar to market F-Type R. The British Villain had been one of the famous marketing campaigns in United Stated so used for this car. 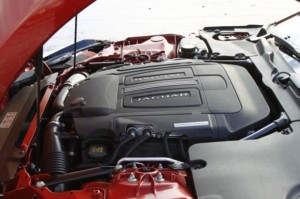 The Jaguar F-Type (SVR) is one of the finest cars in the F-Type series. The F-Type R borrows the engine from this fine Jaguar. It is the same AJ133 5.0 L V8 supercharged engine. But it has been detuned for the F-Type R.

Here this powertrain delivers 550 hp which is 25 hp lesser than the one in SVR. While this configuration makes 502 lb-ft of torque. The drivetrain is mated to the standard 8 – speed ZF automatic transmission. The same transmission system is available in the SVR.

While this same engine is even available in the F-Type V8 S convertible. But it has detuned rating.

The figure that we earned from other automobile reviewers were certainly unacceptable for us. According to them, the F-Type R takes 4 seconds of making the 0 – 62 mph run. While our tests narrated a different story. The F-Type R took only 3.5 seconds to reach that mark.

Our tests even disagree with the statements about the top speed of the car from. Under the mixed condition, over various terrains, the top speed so attained was max at 188 mph. While the company tells that this car can touch the 200 mph mark.

The handling is quite excellent. You can take every turn quite smoothly. Along with the steering, the braking is even quite fine. From 70 – 0 mph, the F-Type R stopped within 149 ft. Well, the carbon ceramic matrix brakes are an optional package for the F-Type R. These brakes help in reducing the stopping distance.

Well, don’t expect a domestic mileage from this car. While you are driving in the city, you won’t get anything better than 16 mpg. While on the freeways, the F-Type R could ensure 23 mpg. 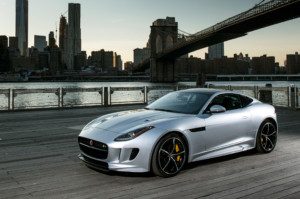 The F-Type R is available in the fastback coupe and convertible body style. Well, the exterior design is quite same to that of the F-Type SVR. The ride height, bonnet hoods, fender vents, front fascia and the rear design is almost the same. But there is no spoiler on the trunk of the F-Type R, which is available on the SVR.

The Gyrodyne Silver 20-inch alloy wheels are standard for both the variants of this car. Besides the spoiler, the R badge is yet another difference between the F-Type R and SVR. 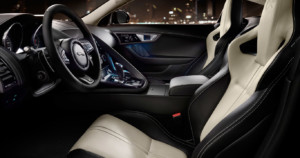 The interior of the Jaguar F-Type R is neatly appointed. Leather sports seats, aluminum trim, and hand-stitched borders are some main ingredients of the interior recipe. Luxury is just the beginning level, the F-Type R is lavish and full of royal touch. And it ensures that you enjoy every performance drive.

The Meridian sound system adds some notes to the ride. The 770 watts 12-speaker system produces a soothing sound that increases the pleasure of the journey. Well if you are in the convertible with the roof open, you may hardly hear this Median sound system at high speeds. Because the F-Type R produces enough sound to bang your ears.

The Jaguar gives plenty of options to personalize the interior design. The carbon fiber accent trims, a variety of sports seats and various other attractions are optional. Well, the F-Type R is pretty spacious. Along with that, there is ample space in the trunk to carry your luggage for a grand tour. 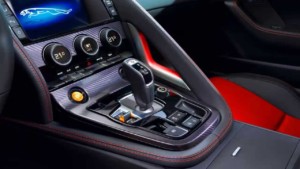 The Jaguar F-Type R even gets the 8-inch touchscreen infotainment system like the other models of the F-Type series. The Jaguar Incontrol® powers this system. This system offers a range of features beginning with the standard music amplifying to adjusting the suspension of the ride. Navigation, telephone connectivity and Bluetooth are even available in the system. 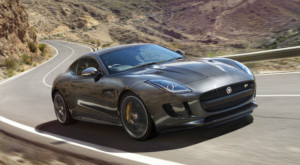 There are plenty of playful rides available in the market, but almost every next vehicle has some safety issue. None of the unfortunate incidents have happened to Jaguar F-Type R. In the column of passive safety, the F-Type R offers sufficient package to cover the driver and the passenger. Some major features include electronic brake distribution, stability control, and emergency braking assistance.

The Nissan GT-R is one of the finest grand tourers available today. It’s fast, agile and reliable. It is even the closest competitor of the Jaguar F-Type R. Well, F-Type R is not that fast, but it is more comfortable and safe than the GT-R.

Going for the Jaguar F-Type R could be a wise decision if fuel does not bother you. It has everything you need for a joyful ride.