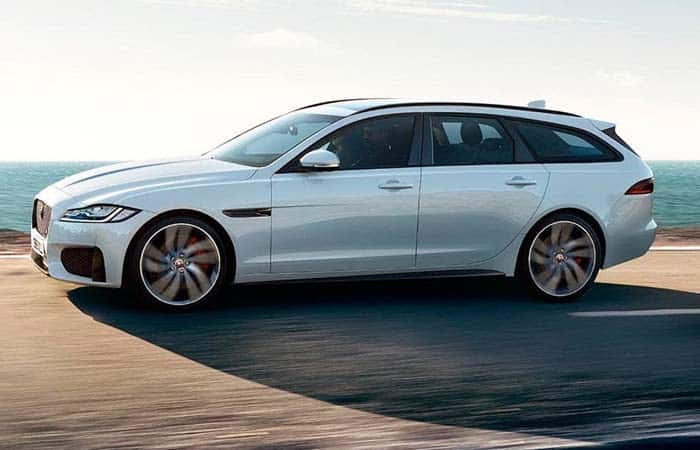 Generally what the cars are for? Just to move out to the office, drop the kids to the school, do a long drive with the friends or do groceries with the family. How often would you prefer getting a sports car? Yeah, you would love to see them in the pictures. But the Jaguar has combined a family car and a sports car together to create the XF Sportbrake.

The second gen came out during the same year, and the package did not include the Sportbrake version. Instead, it was introduced in 2017. Well, this car is purely an attraction for the families longing for a powerful wagon. And for sure it normally finds its space among the aggressive families.

Ahead of that, the XF Sportbrake is only available in 2 trim levels in the North American market. The Prestige is the opener and the S sits atop. While the international market receives 6 trim levels in this car. Well, Sportbrake is available for as low as $42,620 in the rest of the world. But the North American market gets it for as low as $64,575.

The XF Sportbrake could have gained more response from the market if it had been priced a bit lower.

The Jaguar XF Sportbrake is only available with a couple of gasoline drivetrains for the North American market. The 2.0 L 4-cylinder turbocharged join in as the entry-level version. It offers 296 horses making 295 lb-ft of torque. While the top-notch S trim level gets a 3.0 L supercharged V6 engine capable of making 380 hp of power at 332 lb-ft of torque. Well, the good aspect is that the all-wheel-drive comes standard on both the models. While they both are available with the 8-speed automatic transmission with the manual shifting mode.

When you move out of the North American region, you get a handful of drivetrain options available in gasoline and diesel. Well, the entry-level base gasoline versions are available with 2.0 L 4-cylinder 250 hp of power pounding at 251 lb-ft of torque and the rear-wheel-drive configuration. While its upper rated version comes with 50 additional horses pounding 295 lb-ft of torque with the all-wheel-drive. Well, these are the only gasoline versions you can find in the international market.

While the only V6 diesel engine weighs 3.0 L making 300 hp of power at a max torque of 516 lb-ft with the 8-speed automatic transmission.

The styling is not so cool but it is good enough to make it stand amid the top-notch competitors. Well, it is just another station wagon with a crossover back. While the front is similar to the XF sedans. Further, the key cosmetic features include LED DRL, projector headlamps, 19 and 20-inch alloy wheels and a power tailgate. The top trim level includes the sports bumpers, black side sills, and a rear spoiler. Indeed such styling is impressive for the family drivers. But the performance followers would look for a more aerodynamic application.

The XF Sportbrake includes a neatly appointed interior with rich ingredients. Perforated leather seats and the leather trim are common among all the models. Further, the heated front seats and the steering wheel is available in a few top-notch trim levels. Additional the S versions include the powered sports seats with 18 adjustments moves. Ahead of that, the XF Sportbrake offers spacing for 5 including the driver. And there is a plenty of space available in this car for the cargo.

The in-car tech is as important as the fuel in the cars. And the Jaguar is among those automakers that offer plenty of technology for the driver and the passengers. Well, just like the sedans, the XF Sportbrake even gets a 10-inch touchscreen infotainment system. The available features include Wi-Fi connectivity, 4G, head-up display and the option for the premium sound system. Further, the XF Sportbrake also features the 12.3-inch colored driver cluster display with configurable options. In addition to that, the Sportbrake features the unique wristband activity key feature that works as the key fob. It certainly replaces the key fob and it is even waterproof. Means you would not have to remove while swimming.

Some key safety features included are the 360-degree surround camera, emergency braking system and the parking sensors and cameras. Further, it includes enough airbags and easily adjustable seatbelts. Ahead of that, some additional features include the traffic sign recognizer, lane keeping assistant and the blind spot monitoring system.

The Volvo V60 is even a fine car and has plenty of power. But it takes away most of the lead from the XF Sportbrake because of its cheap pricing. It is certainly halfway cheaper than the Jaguar wagon.

While, if Jaguar only balances the pricing on this car, it would certainly gain a strong position in the market. It is indeed a fine car to drive, but it is quite expensive.