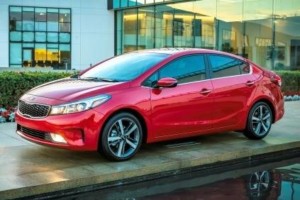 Family sedans and hatchbacks are increasing day by day. The main reason lies in the inflating economy around the globe. Consequently, folks have started to peep into the fuel saving vehicles. As they are the best way to cut off your traveling expenses.

The economy friendly Pandora box has the Kia Forte in it. Well, it was introduced for the first time in 2008 for the model year 2009. Forte is actually the successor of Kia Cerato and Spectra. The Forte is the North American title of this car. While in its origin country, it is titled as K3. The Chinese love to call it Shuma, Columbians prefer Forte K3 and the Singaporeans stick with the Cerato Forte. A Malaysian automobile company, Naza, assembles this car for the Malaysian market. And it was called the Naza Forte.

The Europeans don’t get the Kia Forte. Instead, Kia markets the Cee’d over there. It has a similar drivetrain as that of Forte, but a different body style. Actually, Cee’d is the hot hatch.

The Kia Forte is presently running in its second generation. The first ended up in 2012. And the second generation was launched in the same year. For the year 2017, Forte has received some cosmetics improvements. However, the mechanics stay the same.

Forte is offered for as low as $16,600. Further, there are 3 models in this series, the LX, S and EX. The Kia Forte LX remains the base model, while the S goes for the sporty trim and EX is the exclusive one.

See Also: The history of compact cars, and the best little vehicles in 2014 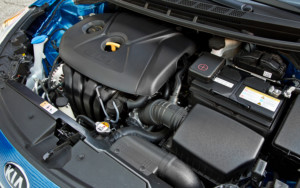 Kia Forte gets a number of powertrains. Further, these powertrains are offered according to the regions.

The base engine is employed with the Multi-Point Injection (MPI). This is the standard fuel powering technology which is even witnessed in a number of 4-cylinder engines. However, the MPI is only available in the LX and S trims. The EX gets the Gasoline Direct Injection (GDI) with 17 more horses. Ultimately it is the high-performance drivetrain of the Kia Forte.

Besides North American market, there are five other drivetrains available for the Kia Forte. The powertrains range from 1.6 – 2.0 L engines. The power rates between 128 – 201 hp. Front – wheel – drive stays the common driving configuration among all the models of Forte.

It was fine to the Kia Forte. During our tests, we revealed that the automatic transmission is pretty spontaneous than the manual. As it allows more torque to the engine to strike the track best. After crossing the first mark (62 mph) we experienced some growling sounds emitted by the engine.

Forte has a pretty domestic handling and grip. It took 181 feet to stop from 70 – 0 mph. Well, we received a combined average of 32 mpg which is around one and a half mpg lesser than what Kia narrates.

Kia Forte has received some major exterior changes for the year 2017. The head and taillights are reshaped. Further, the grille design is improved. And the face has been lifted. At the rear the there is a sleek decklid spoiler and a restyled chrome exhaust tip. However, Fog lamps, LED taillights and the chrome beltline are optional add-ons for the Forte.

Kia Forte is available in sedan, coupe and hatchback body style. The base model gets the 16-inch 5 spoke alloy wheel. The Sports and the exclusive trims get the 17-inch alloy wheels with a different designing.

This car looks much like a decent errand runner. It doesn’t look like a track dominator or the mountain climber. Indeed, it’s an urban fella. 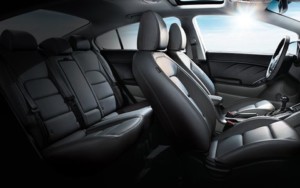 The windshield offers a pretty good vision of the outside. Cloth seat trims, contrast and accent stitching and leather wrapped steering wheels are some available ingredients of the interior. The leather seat trims are only available in the exclusive trim.

Moreover, the sunroof, heated power seats and upgraded center armrest are the optional facilities for the interior designing. The front row offers enough space to drive Forte comfortably. While we can’t question about the rear seats as it is a compact car. Do not expect your 6 feet height colleague to fit in the rear seats.

Well, Forte is an errand runner. Ultimately, it has 14.9 cubic feet of space in the trunk to carry the groceries. 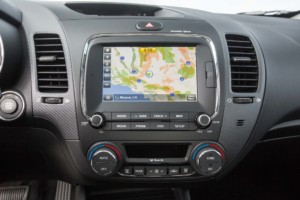 The refined Kia Forte has got some improvement in its features section. It gets the 7-inch touchscreen infotainment system as standard with Apple CarPlay and Android Auto. However, the navigation, SiriusXM, Traffic and HD radio are optional features. Between the speedometer and tachometer is the driver cluster gauge. It is a 4.2-inch TFT screen.

An optional 4.3-inch touchscreen audio display is also available to control the music system of the car. 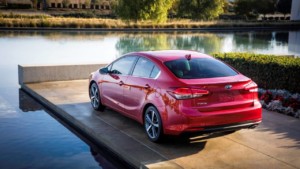 The previous generation of Kia Forte had Poor safety. Actually, the small overlap frontal offset was weak. While the present generation earned the Good remark from the safety authorities.

The Forte has all necessary passive safety in place. However, the blind spot detection, lane change warning, rear cross traffic and forward collision warning features are available for the active safety of the car. 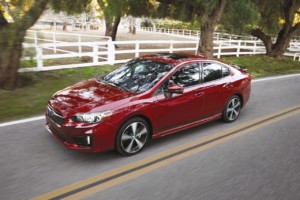 The Kia Forte gets the competition from Subaru Impreza. Well, Impreza ranks higher than Forte. This is because of its steady suspension and powerful drivetrain. Otherwise, both the cars have almost similar interior and exterior.

If you are looking for an entry level sedan or a low priced errand runner, then Kia Forte is in business. Else, the options may expand.