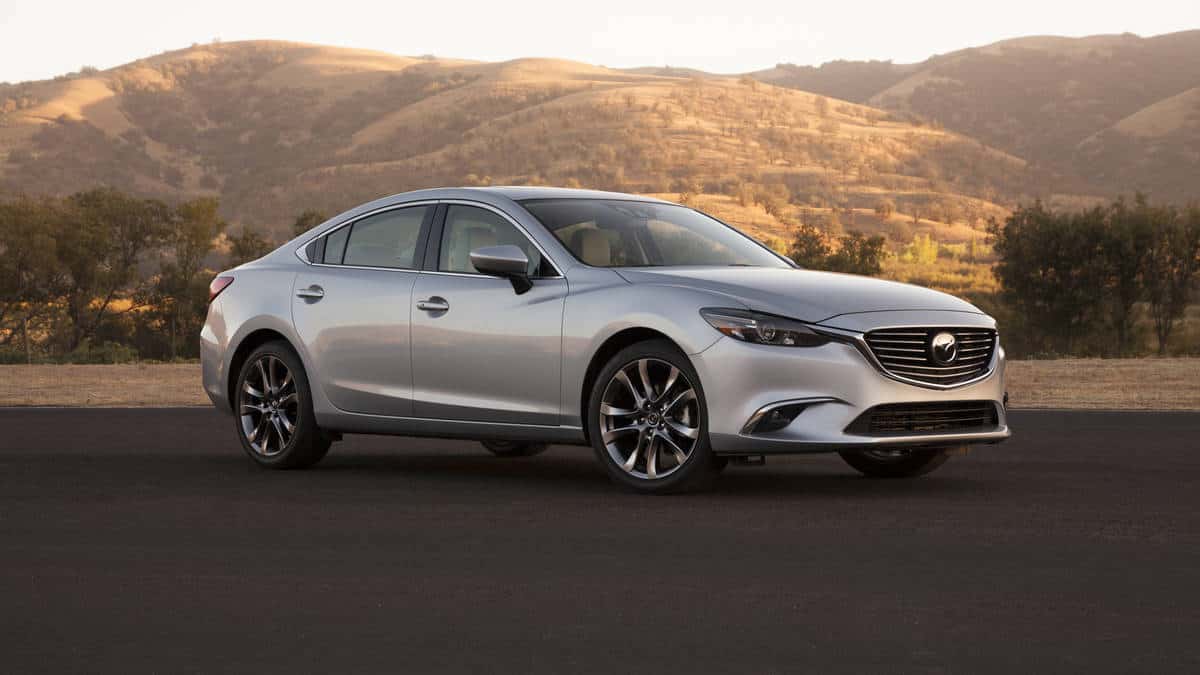 Mazda 6 is a sporty mid – sized sedan. It is generally famous for its wonderful performance and excellent fuel average. This baby is known as Mazda Atenza in China and Japan. It is the successor of Mazda Capella. The franchise was launched in 2002. The present day version of the franchise is the third generation. In some parts of the world the sub – models are prefixed with “GJ”.

The franchise has been famous for its speedy performance and long lasting durable technology. Mazda practices the installation of best materials in its cars and other vehicles. This has generated a lot of fame to the company.

Similarly, in Mazda 6, quality products have been used, which make it more fun to drive. The car is a combination of performance and beauty and has a tremendous response in North America. Since the First Generation, the Mazda 6 got a marvelous fame.

All the models have the same 2.5 L 4 cylinder engines. It is certainly one of the catch in the Mazda 6. General more you invest in a car, better the engine you get. But in this case, the scenario is a bit difference. While rpm’s do increase when an expensive model is chosen.

But not to forget, the fresh Mazda 6 has a powerful drivetrain with a responsive time frame. Thus we are able to get a better acceleration over it. While when it comes to the fuel economy, it is way better than a number of sporty mid – sized sedans. The drivetrain in the car is front – wheel – drive.

Well, one of the weirdo is the availability of manual transmission in the i Sport Model of Mazda 6. In the present age, you might hardly get any automobile company building a manual sports car. While some driving experts narrate that Manual Transmission Mazda 6 could do much better than an automatic one. Having an identical engine with almost similar performance, you can get a better rpm over the manual transmission.

The measured reading for the fuel ETA in a mixed drive came around 35 mpg. It is pretty economical over the wallet.

The track record of Mazda 6 is pretty awesome. It is able to get to the quarter – mile within 16 seconds. While the car stopped from 0 – 70 mph within 172 feet which is an extensible braking power. It has been measured to have a grip of 0.87 grams.

Mazda 6 have got some stylish outlook with beautifully designed cosmetics. Well, the price difference in every model of the franchise brings change in the cosmetics and looks of the car. As you go for the Mazda 6 i Grand Touring, you would get dashing LED headlights, with some different cuts than the rest of the franchise.

Not just the cosmetics, the structural changes are also available. The measurement of each model is different from the other. Well, the refresher for the year 2016 is generally having cosmetic differences rather than the performance schedule. The shape is ideally reformed which is self-explanatory that why Mazda did so.

The Japanese sensed the competition going hot and made vital changes that brought Mazda 6 to the top. The i Touring model is weighed to have almost 170 pounds of lesser weight than one of the GT versions launched by Mazda this year. The weight reduction is pretty eloquent when comes to speeding the car and better performance.

Mazda 6 doesn’t include the hot and cozy seats. It’s more of the standard seating structure. But Mazda has really placed some beautiful inclusions in the car which have made it fantastic to look from inside. Either it should have been a standard drive. But it is not like that.

The color choice and comfort level can depict the luxury in Mazda 6. It has neat and classic finishing to the stuff from the inside. The dashboard, seat stitches and color scheme is wisely chosen. They are quite soothing for the eyes.

Mazda left another catch in the car. The infotainment system in the cars today are expected to run the Carplay by Apple and the Android Car Auto. But Mazda 6 has a standard driving software. Even the navigation is a bit sluggish.

But this beautiful looking device has a good performance capability. The rest of the functions such as the radio and music player do quite fine. It is a touch screen panel but even has the central control knob for the operations.

You may get the Blind Spot detector and the Traffic Alerts in the i Grand Touring model of Mazda 6. But the rest of the models doesn’t have that.

The automation of Emergency Braking System and Adaptive Cruise Control is a safe driving package. The later models in the franchise even have the radar sensors. The Blind Sport and the Traffic Alerts feature are indeed a great safety when driving over a jam-packed roads. They are quite helpful in reducing the chances of RTAs.

From the US we get a competitor for our Mazda 6. The Chevrolet Malibu with two engine versions and a number of more horses to offer than the Mazda 6. Theoretically, the Malibu takes the higher rank. But what it could be on the tracks and roads, can only be judged by their practical performances. The manual Mazda 6 gives way more performance comforts than its competitors.

Based on its performance and looks, the vehicle is ranked as the “No. 1 Family Sedan” from an automobile magazine. Not just the performance, but the appearance and interior of the car even best suites the Family Sedan. All the track and regular drive tests revealed that Mazda 6 has nothing wrong in it. Whether it’s the performance or the looks, Mazda 6 is a fun to drive.