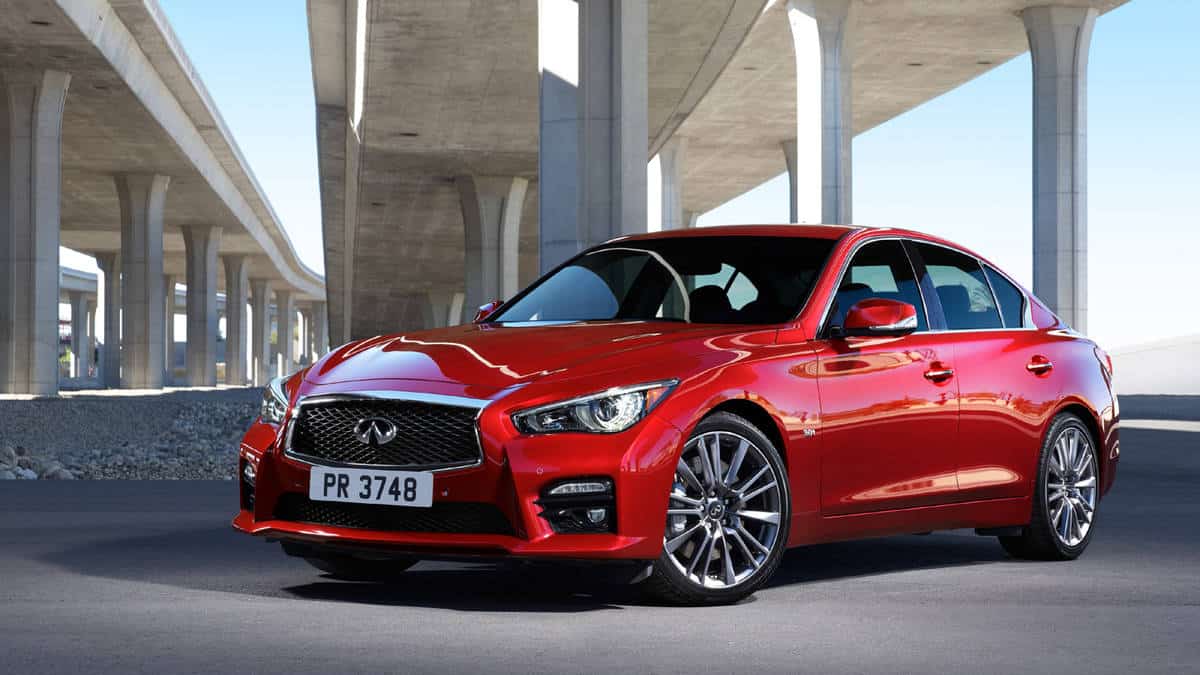 An Infiniti without a performance version is like a horse that cannot gallop. Although the company takes care of the luxury and performance cars. But at times it even needs to comprehend the highly tuned performance rides.

Likewise, the Infiniti Q50 is a luxury sports car series. But the Q50 Red Sport 400 adds more fuel to its performance schedules. The Q50 has a range of drivetrains to offer but a performance improvement was required to cope up with the prevailing competition.

In 2016, Infiniti improved the 3.0 L powertrain to stimulate the competition. The improvement resulted in the Infiniti Q50 Red Sport 400. This car was displayed at Chicago Auto Show for the first time. Later it was even displayed at the Geneva Motor Show.

The Japanese counterparts of Infiniti and the Germans started to bring off the best notch they can. This lead to the development of a crucial competition. The competition got pumped up when Jaguar participated with full throttle.

The Q50 was doing well within its column of luxury, but to compete with the rising competitors, something of their standard was required. Although the revamped Q50 is indeed quite powerful, but it is still behind a number of competitors.

The Infiniti Q50 Red Sport 400 gets the 3.0 L V6 twin-turbo engine. The same engine is available in Premium, Signature and Sport trims. While the V6 in Red Sport 400 is rated at 400 hp making 350 lb – ft of torque. This powertrain is tuned 100 hp powerful than the standard one.

Along with the engine, the Q50 Red Sport 400 is mated with the 7 – speed automatic transmission, which is even taken from the other 3.0 L models. Well, the rear – wheel – drive configuration is the base offer. While, the all – wheels – drive is available as an upper trim.

The rear – wheel Q50 Red Sport 400 took 4.5 seconds to launch from 0 – 62 mph. On the other hand, the all – wheel – drive model took 4.3 seconds for the same mark. Well, this car could have been faster if the transmission would have been any better.

The 7 – speed automatic transmission suits well with the 300 hp V6 engine, but when it comes to the 400 hp it starts lagging. The thrust that this immense power requires is missing here. Indeed, the Q50 Red Sport 400 would have covered the same mark in 3.5 – 3.9 seconds but this is its fate.

The handling is fine. But it is not perfect. Steering was merely subtle but we demanded something more for this machine. The electric power steering is standard for the Q50 Red Sport 400. While an optional direct adaptive steering system is even available. Besides steering, the braking and cornering are nice. We did not have to put much effort in stopping the car.

The Q50 Red Sport 400 has the same body structure as that of the other Q50 models. If Infiniti won’t have suffixed “S” on the badge of the car, it would have been really hard to distinguish the Red Sport 400. Well, the 19-inch forged wheels and the exhaust tip even depicts the difference between the other models and the Red Sport.

Well, we were expecting a different grille, some enhanced aerodynamics and the autodynamics on the car. But there is nothing different besides the wheels. Still, the design is pretty lucrative.

The interior design of Red Sport 400 is slightly different from the other models of the Q50. A sports interior is appointed in the car. The interior includes leather seats, Kacchu aluminum interior trim, leather-wrapped steering wheel and gear knobs. The pedals and the doorsill get the aluminum accent.

Besides the cosmetics, the spacing is sufficient in the car. Front row is as usual spacious while the back row is even spacious. The trunk has enough space to carry away the groceries or other items.

Overall, the Q50 Red Sport 400 depicts a sports culture. It is luxurious and comfortable, but this comfort is most suitable for a performance drive.

A pretty fine infotainment system with the dual screen is available in the Red Sport 400. The system features the 8 – inch upper and the 7 – inch lower screen. The upper one performs as the infotainment system, while the lower one displays vehicle information. The Navigation is optional for this car. While the standard features are voice recognition, music amplifying, Bluetooth telephony and music streaming. The trial version of the SiriusXM® Travel Link is even available in the car.

The Q50 Red Sport 400 features almost the similar passive safety features like the other models of the Q50 series do. In addition to them, the active safety features include rearview camera, sonar sensors, adaptive cruise control and stability control.

No major mishap has been reported reported yet. But still the Infiniti has taken care of the safety of this car. Certainly it is a safe car to drive.

The Infiniti Q50 Red Sport 400 get the competition from the same old competitor, the Jaguar XE. The XE is not as fast as the Red Sport, but its drive is fabulous. And this makes it certainly better than the Red Sport.

Well, the Infiniti Q50 Red Sport 400 is sheer power. It’s not a bad car at all. But the transmission system and the handling needs improvement. Rest is all fine.