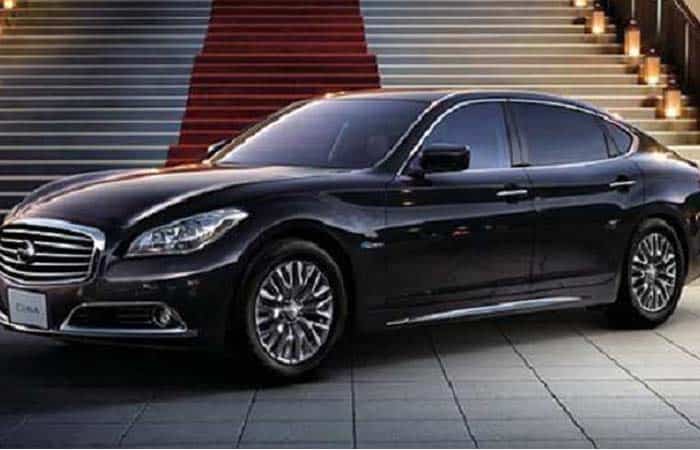 Summits are pretty high to climb. But sometimes, it is merely easy to reach the top of a summit and have a cup of tea of there. The elegant Nissan Cima made this fact a reality, that summits could be climbed easily. Well, the word Cima has been extracted from Spanish, which means Summit. And nevertheless, the Cima really complies with the standards of the glorious summits.

In 1988, the Cima was introduced for the first time. The car was launched as a companion of the Nissan President. It was certainly difficult to roll on with a single luxury model when there was competition in the market. Thus to fill-up that gap, the Cima was brought in.

Since then, the Cima has gone through five different models. The first three generation bore the production badge of Y31, 32 and 33. While the fourth and fifth generation got the F50 and 51 badges.

The Cima has been designed mainly to meet the Japanese market. The hybrid drivetrain has been introduced to this car to get a better mileage. Certainly, it is a parallel hybrid system that is created to alt the regular fuel.

Well, the Cima gets the 3.5 L V6 engine, that could be found in the Infiniti Q70 hybrid line. It has a combined power rating of 360 hp of power with 258 lb-ft of torque. The powertrain gets the HM34 50 kW electric motor. The electric system adds a total of 199 lb-ft of torque to the Cima’s powertrain.

To run this system, Nissan has added a constructive lithium-ion battery in Cima. The battery functions with the quick charge and discharges function to provide scalable electric performance. The 7-speed automatic transmission is coupled with the Intelligent Dual Clutch control. The system is run by the electric motor for a continuous torque vectoring and lower fuel consumption.

When you have already driven the Q70 hybrid, you do not really find the Cima any different. It has the same level of acceleration and the similar performance. In Cima, we recorded 0-62 mph within 5.4 seconds and scored the track best of 157 mph. That is not different than the Q70. The only difference we felt was in the handling. The Q70 is a bit lighter than the Cima. And that makes it steer sweetly than the Nissan. Though Cima is not subject to poor handling credibility. Instead, it has some stiffness that is obvious is overweight cars.

In the first look, it is a bit difficult to differentiate the Cima from Q70. Actually, there is not much difference at all. It is just the slight appearance of length and the badge that makes both the cars look different. Well, the Cima has a bold elegant appearance that is settled mandatory for an executive car. It even has some groove details for the aerodynamics. But that does not suffice with the sporty performance. And obviously, such cars are not meant for the sports. Even you would not prefer speeding Cima. As she is an elegant babe!

The cosmetic details include LEDs, projector headlamps and beautifully crafted allow wheels. The front grille is pretty much same as that in the Q70. Well, the Cima gets an executive touch in the rear design. It has a spoiler, but it is a tiny little trunk length beam only. While the Q70 gets a complete aerodynamic detail in the rear.

The Cima is been crafted for executive rides. The interior appointment is made to fit in the Nissan presidential flagship. The exquisite leather ingredient, carbon fiber trims, contrast stitching and wood finishing makes the interior quite luxurious.

When it comes to the spacing, the Cima is enough big to accommodate 5 people including the driver. Along with that, there is ample space for luggage in the trunk. You do not need such a car to fetch your groceries. But it is able to suffice with the journey luggage.

The Cima includes a custom built infotainment system. It is mainly a multimedia system with all its support for the audio and video. Further, the system has the support for the telephony, Bluetooth stereo, and connectivity, Wi-Fi and 4G. And this is all you get with this system.

Well, the sound system is pretty awesome. You would really not require any aftermarket equipment because of its decent quality and nice sound.

The Cima does not have any problem with the safety measure for the occupants. It has enough amount of airbags to qualify the safety check. In addition to that, the Cima gets the availability of some basic active safety equipment. Such as the cruise control, anti-lock braking system, electronic brake force distribution and the parking sensors.

The Toyota Crown is the equal competitor of the Nissan Cima. Especially in the Japanese market, the Crown gives a hard time to Cima. And besides the brands, it is merely hard to find any difference between both the cars.

The Cima is a good option if you are looking for an economical executive car for your company’s CEO or president. But if you need something big, you would have to visit Europe.