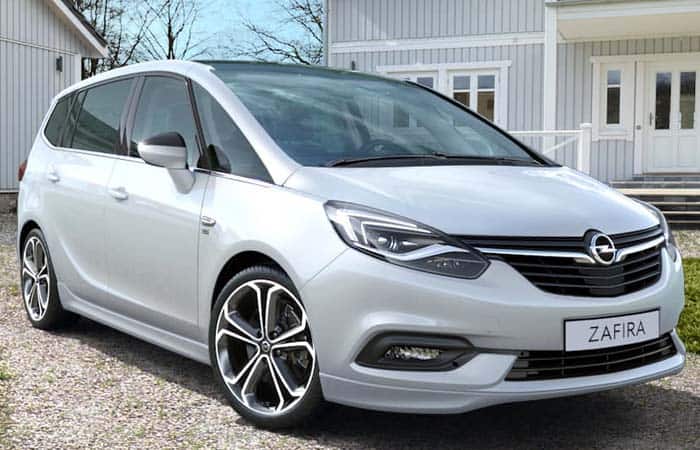 The Opel has filled the slots with every type of car. It has sedans, hatchbacks, and SUVs. More or less, Opel is confined to build cars for daily life. And yet they prove to be worthy. While talking about family cars, the MPVs share a major portion of the pie. Especially in Europe, MPVs are the best pick.

Well, Opel did not leave the chapter of MPVs behind. By 1996 Opel collaborated with Porsche to create a family car, which was later called Zafira. The Zafira’s first appearance was made during the 1997 Frankfurt Motor Show. And after a couple of years, it was launched into the market.

Then was the second generation that kicked-off by the summer of 2005. And it went on till 2014. That was even a fine car, but one of its rebadged variants had some issues. While that expanded to a serious investigation involving criminology.

A few years before the end of the second generation, the third one came out. And it is still prevailing. A series of development have been made during the present generation. Including a hybrid version which was never launched. Well, the Opel Astra heavily contributed to the development of the third generation Zafira. And specifically, the drivetrain is mainly borrowed from Astra.

Ahead of that, the Zafira could be available in up to 11 different models, based on the performance mechanism. While the cheapest among those would cost you as low as $25,000.

If Opel had commercially launched the hybrid version for the Zafira, it might have been a major blockbuster for the company. But it relied on the gasoline, natural gas and diesel-powered engines.

Well, the party begins with the gasoline models. The first to take place comes with the 1.4 L turbocharged four pack engine making 118 hp of power at 148 lb-ft of torque. Further, the 1.6 L turbocharged variant takes the power to 168 hp with a steady torque of 192 lb-ft. While its over-boost capability takes the torque to 207 lb-ft. The party further extends to 1.8 L engine with VVT tech, making 113 and 138 hp of power.

The natural gas variants include a 1.4 L and a 1.6 L engine, both turbocharged. The power rates amid 138 to 148 hp with 148 to 155 lb-ft of torque. And these are the only flex-fuel variants available in the whole series.

Ahead of that, 5-speed manual transmission comes standard on the base models. The upper trims enjoy either a 6-speed manual or an automatic gearbox. Besides, the handling specs are quite fine. It won’t make you feel like it is oversteered or heavy. Instead, it steers pretty smoothly.

The Zafira is quite stylish and has a very attractive look. The exterior components are nice, including the LED headlamps, alloy wheels, dual tone side mirrors, and a decent rear style. Further, the Zafira shares some constructive details with Astra. Such as the pillars and beams. While the structure is different. In a way, it is a handsomely designed MPV. Ahead of that, the optional items include 16 to 19-inch alloy wheels design, color options, roof rails, and the ceiling box.

The Zafira includes a quality interior. And the interior appointment is ergonomic. Further, the interior ingredients include the cloth seats, fiber accent and trim. The leather seats are optionally available for this car along with the stitching and quilting. Ahead of that, Zafira offers some well needed convenient spots, including pad trays, cup holders and the glasses stockers. While it even gets you plenty of space for the cargo. And it adds up with the rear seats folded.  Additionally, the options include floor mats, convenience items, privacy shades, and a smoker’s suite.

Well, Zafira offers space for 5 to 7 passengers including a driver. The front row spacing is quite comfortable. While the rear row stays comfortable until there are two passengers seated. Once the third guy gets it, and by chance, that is a healthy guy and prefers sitting in the center. Then the guys by the door would prefer jumping out of the car.

A 7-inch touchscreen infotainment system is optionally available for Zafira. The system prominently features the Apple CarPlay and Android Auto. Further, it includes the multimedia controls, telephony, Bluetooth and smartphone connectivity. Along with that, it gets the GPS based navigation system. Ahead of that, the Zafira offers the USB charging ports where you can charge smartphones and tablets. While this system is commonly available for the mid and upper trim levels.

The Zafira had some issues during its second generation. But the present generation has attained 5-stars in the safety exam. Well, some major safety features include the automatic high beam headlamps, front object detector, and vehicle cross. Further, the Zafira also includes the emergency braking system and blind spot monitoring.

The Ford Galaxy is a high-end powerful competitor for the Opel Zafira. And specifically, it sits atop Zafira in the European market. Well, the Galaxy has more power and a steady performance comparative to Zafira. While the interior appointment is almost similar in both the cars.

The Zafira is certainly a fine option if you are looking for a large MPV for your family. As it has a nice performance ability and a comfortable interior. But the only thing that could bother you is the rear row seating space.