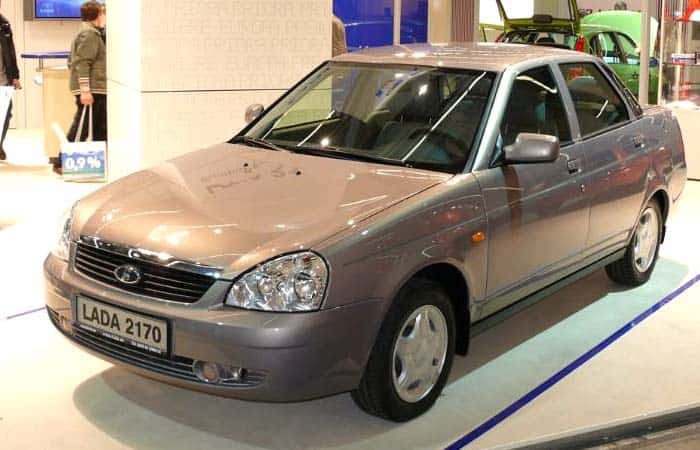 The continuous improvement in the auto world brought various facilities to the daily driving. Tremendous features are available to draw across heavy traffic and remain safe during the rush driving. While this all increased the family driving experience which leads to the new generation.

Well, almost every other family sedan carries enough features that not only make driving easy but even adds fun to the journey. One of the outgoing examples is set by the Lada Priora that offers various features to the family riders. Well, this Priora was introduced in the anticipation of the 110 that served the market for almost decade. That was a fine family car that even appeared in a number of motorsports events.

The Lada Priora earned decent fame in Russia along with the East European states and some North African regions. Its low price, lower maintenance cost and a commendable fuel mileage attracted a lot of families towards this car. While its upgradeable structure lured some sports enthusiasts. Even AvtoVAZ presented this car in various sporting events including the World Touring Car Championship Season of 2009.

As per a recent confirmation of AvtoVAZ, the Priora would not be manufactured anymore. Instead, it would be replaced by the already existing Vesta. While the company stopped exporting the Priora since 2016 which was only left for the domestic sale. And as its replacement, the Vesta came in.

Ahead of that, the Lada Priora is available under 5 models and gets a starting price of $12,500. While the finest trim with almost every option installed is available for $14,700. Further, by the mid of 2019, the Priora might not further be available in the market. But its parts and accessories would still be available.

The Priora commonly appeared as a family sedan. The vehicle was a fine pick for the families looking for a low-cost car. While the Priora was not only a fuel-saving family car. Instead, it even showed some decent performance.

The base variant comes equipped with the 1.6 L 4-cylinder engine. It is one of the common drivetrains that was found on the Priora. While it offered 98 hp of power with 106 lb-ft of torque. Such power rating is fine enough for the family driving. But you cannot count on the performance from such a machine. Further, the drivetrain is coupled with the 5-speed manual transmission.

The upper trim variants are available with the 1.8 L 4-cylinder engine. Though it is even a modest performance block. But along with the decent riding standards, it even offered some performance capabilities. Well, this powertrain comes with 120 hp of power producing 130 lb-ft of torque. Additionally, it is mated with the 5-speed ZF automatic transmission equipped with the manual transmission mode.

Ahead of that, the Priora even performed in the World Touring Car Championship Season of 2009. But it was never able to grab any trophy in the tournament.

With time Lada improved the handling traits for this car. The finally available version is not just a simple sedan with obsolete handling specs. Instead, it received notable improvement that increased the handling ability making it a fine car to drive on the rushed pack city roads. And evenly it offers a remarkable handling ability over the highways.

The Priora gets a very static exterior design. It has a flat frontal design with a slight curve over the grille and a flat rear design. Further, the steel wheels, halogen headlamps and a gently designed and old fashioned grille come standard. While the upper trim models get the fog lights, alloy wheels and body colored side mirrors as well. Overall, the Priora has a pretty old design. But it would not bother those who are looking for a cheaply priced car.

The interior setup is simple and just fine. There are five cloth seats, fiber accent, and trim and some convenient spots in this car. Further, it has spacing for five including a driver. Ahead of that, it offers ample space for the cargo. Besides, there is just a minimal option available to enhance the interior setup. However, going with the aftermarket products could make the Priora much more comfortable. Though it is still spacious and fine as a family ride. But not enough comfy.

The Lada Priora comes standard with a stereo player. While a touchscreen infotainment system is optionally available. The system offers multimedia controls, navigation, smartphone integration, Bluetooth and radio controls. Ahead of that, the Priora includes climate control with the manual and automated setting. Further, it does not offer the Apple CarPlay and Android Auto.

The Priora just scored 3 stars in safety rating. Well, the previous version only scored 2 stars. Thanks to Lada for adding airbags and the seatbelt pretensions to this car. Further, the Priora is available with the antilock braking system and the parking sensors. Additionally, it includes the rain sensing wipers and electronic stability control system. While this is all you can get with the Lada Priora.

The Hyundai Accent is one of the common competitors for the Lada Priora. The Priora usually confronted the Accent in the European markets. And every time Priora took benefit because of the low price. While most of the times the Accent stood ahead based on its modern styling and comfortable interior setup.

Well, the Priora is gone now and the Lada is eyeing on Vesta to get a better position in the market. For all the time Priora remained alive, it performed well for the company.