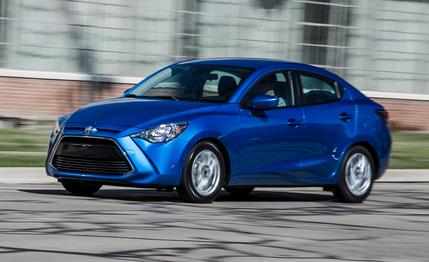 Being over the road for performance is not the requirement of drivers in the world. Economy and passenger comfort is the most important thing. While choosing a car for the family mileage and maintenance are initially kept in mind. Then comes the performance.

The family oriented Scion iA is among the family concept vehicles. iA had recorded almost 15,000 sales since its production. Since the discontinuation of Scion, the Scion iA will be marketed as Toyota Yaris iA from 2017.

The starting badge board by Scion iA is of $16,000. While iA is the only 4 – door sedan from Scion. And iA is the only model as well from Scion that is not built in Japan. Well, the Japanese industry has a different taste in car manufacturing.

Scion iA is heavily based on Mazda Mazda2. Shape, performance and interior all resemble Mazda2. While some integrations reveal that Mazda2 and Scion iA had been produced alongside.

But the joint collaboration gave a chance to Scion to build nice and sound cars. That’s why the Scion xA and xB got a tremendous response. While getting back to Scion iA, its design and specifications are even quite spectacular. And so much in such a minimal price is the jaw-dropping feature of Scion iA.

Besides the shaping, the performance schedules of Scion iA resemble Mazda2. While the manual transmission has been tested to be much more powerful than the automatic transmission. The gearing lag and the transmission switch is better in the manual shaft.

The 1.5 L 4 – cylinder engines are quite silent. You won’t hear that growl from Scion iA which you usually expect from the 4 – cylinder machines. While Mazda and Scion share the same Skyactiv Gasoline Engine.

The test drives revealed that it is a bit harder to ride 106 horses of Scion iA. Acceleration was a bit sluggish. The transmission lag could be blamed for that. But the manual gearbox allowed a decent pitch for transmission.

The tests further revealed that Scion iA is a fuel-friendly car. The estimated mix EPA was calculated around 38 mpg. It is a good estimate for 1.5 L sweet engine. The run felt like driving a Mazda roadster or a coupe.

Although the steer control and road grip was awesome, but it even has the taste of Mazda. Rather it’s slightly softer and gripper than Mazda.

Well, it is good to drive such a decent car. There is a fraction of catch available in the performance of the car. And the mileage of Scion iA, would have killed all the catches if there were any. The handling of Scion iA suites the family rides. It has soft and swinging handling. Over the crowded and thick streets, it is easier to steer Scion iA.

Scion iA looks like an angry giant. Still, it has a classy shape. While the tail and sides reveal that there is something in common between Toyota Corolla and Scion iA.

The front appearance of Scion iA is not that much impressive. But rest of the shape is pretty acceptable. The grumpy nose certainly devalues the car. Such an impressive car with a sad grump face! That certainly goes awkward.

And the unfortunate fact is that there are a number of consumers in the world who prefer to purchase cars having attractive shapes. Rather the front of Scion iA certainly resembles the grumpy cat.

Beside the grumpy face, the rear bumpers, and the headlights, rest of the shape is as same as Mazda2. Certainly, it’s a sedan turned out from a hatchback.

Scion iA has been provided with beautiful colors in the inner. The steering wheel color, stitches, window panes, and the dashboard bear a wonderful contrast. The infotainment placement is even ideal for the driver.

But when we get to the rear seats of this sedan; there is some improvement requirement. The legroom for the backseat passengers is less which has to be more in a sedan.

While the best thing is the silence in the car. The sound proofing is excellent which dumbs the outside world. The inner feel makes it a relaxing ride to drive.

The 7.0 touchscreen infotainment system is a spectacular inclusion. Though such big screens are not generally added in economy cars. But Scion iA has that, which makes it more adorable.

The best in the safety of Scion iA is the low-speed collision system. Which means that the emergency and safety parameters will even be followed over the slow speed accident besides the high speed.

The smooth steering and sharper brakes of Scion iA are really a great help to avoid RTAs. Besides these there is every other parameter which is essential for car safety. Whether it’s the air bags or the cruise control, they all are present in Scion iA.

The Scion iA would rather be a perfect choice for families. Though the rear seat passengers should be either kids or the average height people. Besides the looks and seating, everything else in Scion iA is absolutely suitable for a family. It could serve as a good option if you are looking for performance and mileage.