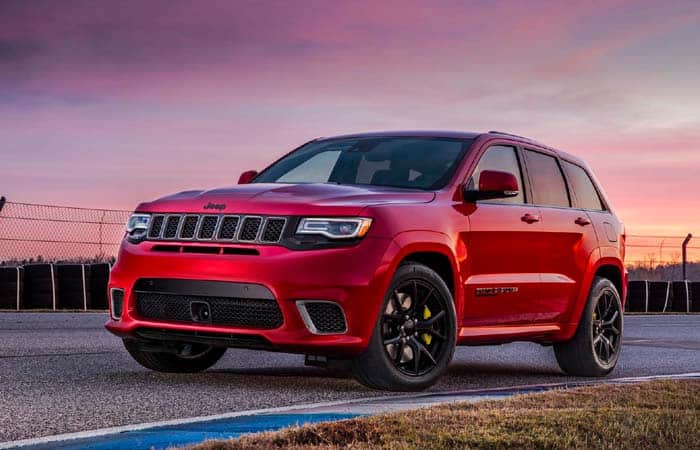 Boosting the power means you are unshackling the beast. There are too many powerful SUVs that we see all around the clock. Some of them are kept a showpiece, while some are the power exhibitors. Among these are some vehicles that are kept for the hot pursuit. While some are meant for the federal delegation.

Among the class of beasty SUVs, Jeep has introduced the Trackhawk. Actually, it has been launched as the model for the Grand Cherokee. During the New York International Auto Show 2017, Jeep announced that there will be a monster unleashed for the year 2018. It was titled as the Trackhawk. Soon after the initial introduction, the launch dates for this monster were announced.

It was announced as the model for 2018. While the distribution was commenced in 2017. Well, the Grand Cherokee is the successor of the SRT 392. It has the similar drivetrain, cosmetic designing, and the interior setting. But there are just a few differences between these cars. The SRT 392 raged the streets for 5 years. And finally, in 2017, it was put to rest.

Among all the Grand Cherokees, the Trackhawk is the most powerful version ever. Though its ancestors were even never the less. But its something that surpassed their ranking. Its fine power and agile structure make it rank among the world-class SUVs.

The suggested base price for the Grand Cherokee Trackhawk is $85,900. While the available amenities take the pricing up to $93,000. Well, it could even go more, depending on your aftermarket preferences.

The Jeep Grand Cherokee SRT 392 came with the 6.4 L Hemi V8 engine. Though it had a bigger caliber but was not that much monstrous. That is why the Trackhawk jumped in.

It comes with the 6.2 L Supercharged Hemi V8 engine producing 707 hp of power with 645 lb-ft of torque. That is indeed monstrous. And that is one of the powerful drivetrain available in the Grand Cherokee series. Well, it is mated to the 8-speed automatic.

Not to forget, this 6.2 L Hemi is borrowed from the Dodge Challenger SRT Hellcat. And never the less, the Charger Hellcat even has the same engine. Well, the hilarious thing is that the Challenger coupe, Charger sedan and the Trackhawk SUV share the same power specs.

We tried to find the difference between this SUV and those sports car. And luckily we found one. The Grand Cherokee Trackhawk has the track best of 180 mph. While those cars can go up to 200 mph. But the launching of all these vehicles is almost same. In our tests, the Trackhawk took 3.5 seconds to launch from 0 – 62 mph.

Well, the Trackhawk is available only with the all-wheel-drive configuration. That certainly reduces the requirement of 4×4. But there is a difference between both the technologies. Further, this SUV is capable of towing 7,200 pounds of weight. That really does not leave it as a sporty SUV. Indeed she has some cool off-road capabilities.

Along with the performance, the handling of Trackhawk is even quite fine. It turns better than our expectation. As we never thought that such a heavy SUV could take quick turns. Another amazement was when it stopped from 70 – 0 mph within 168 feet.

The Trackhawk bear the same looks like its other siblings. Some cosmetic parts are the major difference in the design. Actually, those parts are optional for the other trim levels. While they are standard for the Trackhawk. Like it gets the 20-inch black satin wheels. Further, it gets a slightly different front fascia. Such as it has vents on the upper side of the front bumper. While the rear is almost the same without any difference.

The leather is the major interior ingredient for this car. The seats have nice carving on them. And they are quite comfortable. The accent trim gets the carbon fiber. While the leather trim is optional. The back row offers to space for three. And the seating is comfortable. The legroom and the headroom are fine enough to sit comfortably in this car.

The cargo offers sufficient space with the rear seats up. While there is no option available for folding down the seats in this model of Grand Cherokee. Further, the Grand Cherokee’s favorite Enter ‘n Go is standard for this.

The Grand Cherokee Trackhawk gets the 8.4-inch touchscreen Uconnect system. Apple CarPlay and the Android Auto are standard for this system. In addition to the mobile connectivity, the SiriusXM Guardian is also available for this car. Further, the navigation is even standard for the Trackhawk.

The Jeep has included the GM’s personal favorite performance pages to the Trackhawk. Well, that is all because of the powerful 6.2 L Supercharged V8 Hemi engine that can make this car fly. While driving Trackhawk you can keep a note on the performance of your car.

The Trackhawk gets enough equipment for the occupant safety. It has seven airbags installed in almost every necessary position. Further, the safety cage helps in reducing the collision impact. Well, the Trackhawk gets plenty of active safety features. The blind spot monitoring, lane departure warning, and collision warning are some standard features. The parking assistants including the rearview camera provide some decent driving assistance.

The GM’s essential power reducing feature is available for the Trackhawk. Parents would not have to worry about their teens driving the Trackhawk wildly. As they can restrict the power of this car to the first gear only. And certainly, kids would hate it. Even the Valets would hate this car. But we love this feature!

The Chevrolet Traverse is a distant sibling of the Jeep Grand Cherokee Trackhawk. And luckily they both are the rivals of each other. Well, the Traverse is not as powerful as the Trackhawk. But it is more comfortable and has more pleasure.

Power could never be undermined. It gets plenty of appreciation. And is mainly liked by a lot of folks. And that is why the Trackhawk would attract a lot of power lovers. But she might not lure the luxury lovers.