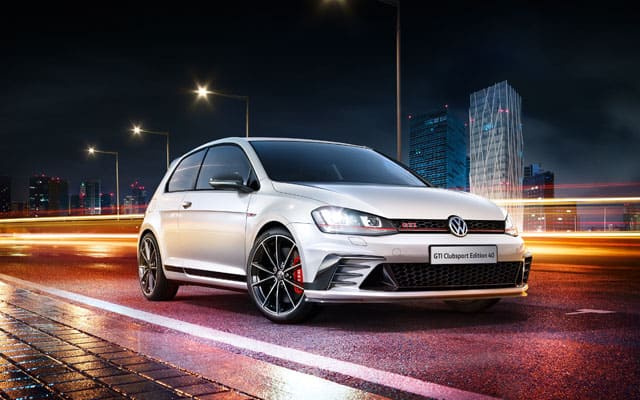 The performance edition of the Volkswagen Golf is the Golf GTI. This family hatch is already popular on the basis of its performance and stability. But the Golf GTI adds more fuel to the handling and thrust.

With the introduction of the other models of the Golf franchise, Volkswagen launched the GTI. That was the summer of 1974 when Golf GTI was introduced for the first time. Internationally it was known as Golf Mk1. While in the North American market it was marketed as Rabbit, in Mexico as Caribe and in South Africa as Citi Golf. Since its introduction, it has gone through seven generations. The present day generation was displayed in 2012 and launched in 2013.

Golf GTI has been franchised in a number of video games. It has attracted a wide range of game developers because of its speed and acceleration. It’s notable use could be seen in the Electronic Arts’ Need for Speed. Sonny, the Black List Rival # 15 has the Golf GTI in Need for Speed: Most Wanted™.

It bears the price tag of $25,595 as the lowest MSRP. The model line consists of S, Sport, SE and Autobahn. Golf GTI (Mk7) is the first every European car to earn the Car of The Year Japan Award in 2013. The Golf GTI Sport trim has been launched in the present year.

The Volkswagen Golf GTI is a performance machine. Since its introduction, it has maintained a good track record in its class.

The 2.0 L Turbocharged engine is installed in GTI. The engine is capable of making 217 hp of power with 258 lb – ft of torque. The drivetrain is matted with a 6 – speed manual as well as automatic transmission.

The cosmetics are mainly different in Golf GTI trims. But the performance even differentiates the trims. The base models generally get the 210 hp tuning. But if you invest more you get the 220-hp sport-tuned Golf GTI Sport. A boosting feature is optional for the Golf GTI. It enables it to ride with more horses. With the boost enabled, we have tested the 0-62 mph acceleration within 5 seconds.

The front – wheel – drive is the only drivetrain available for the Golf GTI. The transmission system is available with 6 – speed manual as standard. However, an automatic transmission is even available.

Colors, cosmetics, and wheels are the differentiating aspects of the Golf GTI trim line. The appearance is quite conventional. You may not find much difference in the exterior designing of the hatchbacks. The badges differentiate the Volkswagen Golf models. As like, the Golf GTI bears the badge of GTI. 3 and 5 door hatchbacks are the available body types.

The performing hatchbacks certainly bear the similar shape. A dragged down front, curved roof, a thin spoiler and opaque back are some major ingredients of the exterior design. There is some aerodynamics available on the Golf GTI, but it does not have a notable reception in the performance of the car. Indeed, it’s yet another hatch, but there’s nothing to complain about its shape.

An impressive sporty interior is available in Golf GTI. Ducked plaid sporty seats, smooth ambient lighting, and firm interior designing are some major inclusions in the Golf GTI. Along with the plaid seats, leather sport seats are even available for the Golf GTI. The Golf GTI Autobahn has the finest interior. You can get it for $34,095 . The interior gets the soothing sound from the Fender audio system. Irresistibly you may feel like driving in a video game.

Interior spacing is sufficient in the car. The front and back rows are ample to seat 4 adults. But if you are about 6’, you may have trouble in sitting. The windscreen is wide, giving much space to the visibility.

The system is pretty responsive. Certainly, there is nothing to complain about it.

The Golf GTI is full of safety features. Since its initial introduction to the world, the Golf series has been impressing the family riders because of its safety. The present day Golf GTI ranks among the safest vehicles on the planet. There is enough of the passive safety ingredients. While there is even a pile of active safety features. Adaptive cruise control, Tire pressure monitoring, Post collision braking system and Intelligent Crash Response System (ICRS) are some major active safety features.

The Ford Focus RS is one of the closest competitors of the Golf GTI. Although, Focus is pretty much active responder than Golf GTI, but the price makes GTI ranks superior. It is $8,000 cheaper than Focus.

Street legal as well as track performer Golf GTI could be a good option for your porch. The GTI could be feasible for you if you are looking for mileage, performance and family cabin. Further, it bears low price.