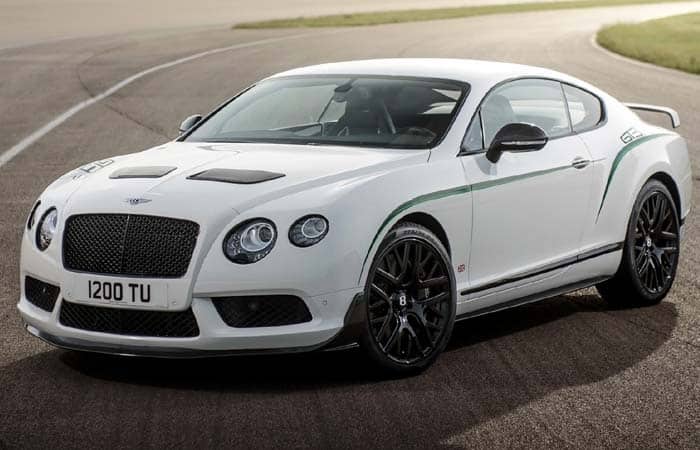 The super choice is at times set limited to a set number. You cannot go above that, and that is the final break for that super choice. And these choices are mostly found on the profound entities.

Well, if you think about the Bentleys becoming unleashed, would certainly put them in a high rank. And that is why they come up with the limited time offers. The Bentley has played this trick a lot of time. And one of the leashing examples is the Bentley Continental GT3-R.

As far as the title is concerned, she seems to be a luxury sports car. Well, the Bentley came up with the plan of a limited edition Continental GT in 2013. They were of a view to pulling this car into the class of rich people. Certainly, those who want luxury and power at the same time.

After all the planning, in 2014 the Continental went into production centers. And by the autumn of the same, the GT3-R was launched for sale. Only 300 units of this car were produced. And 103 of them were for the North American markets. At that time, she was priced at $337,000. Well, in the present day, the Bentley Continental GT3-R reached $339,725.

Building a sports car out of a luxury tin box is not difficult. You need some bright brains, some science and some knowhow of the sporting world. And there you go with the exclusive sporting entity. And yeah one more than, do not forget to make her lose weight.

The Bentley practiced the same technique and reduced the weight. And they upgraded the Continental GT V8 S into a sports machine. Though the V8-S is already a sports car. But the Bentley added some more power to it.

The Continental GT3-R borrowed its drivetrain from the GT V8 S. The performance concepts are pretty much similar in both the cars. Well, the engine block consists of the twin-turbocharged 4.0 L V8 engine with the same 8-speed automatic transmission with manual shifting mode. The Bentley had tried to bring out a super-sports car out of a sports car. And for that, the power rating for this engine has been improved.

The GT3-R has some good 572 horses with 516 lb-ft of torque. But they come with the overpower dynamics, which bring the rating up to 592 hp with 553 lb-ft of torque. The standard power rating is 51 hp more.

Well, the GT3-R is 0.4 seconds faster than its lender. She worked 0-62 mph in 3.6 seconds. But we were only able to take her to 190 mph. Though that is theoretically 16 mph lesser than the standard GT V8 S. Certainly, the GT3-R is smoother, faster and a mashed up ride. She has a sporty breath and luckily she is the street legal Bella.

Away from the performance, the handling ability of the GT3-R has been tightened up. She sways sweetly and takes every turn sharply. We rode her on the curvy roads with every twist and blink. And she was successful in giving us a shut-up call. Well, thanks to the aggressive sporty suspension, enhanced shocks and the torque vectoring system. Ahead of that, the large ceramic disc brakes are fine enough to stop the Bentley Continental GT3-R. They are pretty sharp in grabbing the wheel firmly.

The exterior is almost similar to the V8 S. The hood scoops, 21-inch forged alloy rim wheels, sports spoiler wing, vinyl strip and the fastback fall are some major difference. Further, the weight is even a major between both the cars. The V8 S had to lose 220 lbs of weight to become the GT3-R. Besides the width and the length are still massive and expressive.

The luxury and comfort still the major ingredients of this Continental GT. Though, she has the sporty characteristics. But she even strictly lies on the standards of the poised interior. Well, after a very long time Bentley has introduced a car without wood. You cannot really assume that wood is essential for the rich taste. But in a way it does. Well, Bentley had reduced a lot of weight from this GT3-R to make it a sports car. And they did not use wood for the interior. Ahead of that, the rear seats have been taken away from the GT3-R. And that is even meant for putting this car on a diet.

Our GT3-R came with the same infotainment system like the one in V8 S. The performance, positioning, and interface are same. The navigation, telephony and smartphone connectivity is available. Further, the music system is quite soothing. We loved the sound of the twin-turbocharged V8 as well as the acoustic speakers available in this car.

The safety specs are not even different. The passive safety features are quite common like the other Bentleys present today. And the active safety gets the anti-lock braking system, electronic brake force distribution and the stability and traction controls. Further, the Bentley Continental GT3-R gets the adaptive cruising mode and the ergonomic paddles for a safe journey.

You need to get a performance contender to meet up something like this. Well, our search stopped at the Rolls-Royce Dawn. Whenever you think about the grand touring, you would meet the Rolls-Royce and the Bentleys. They are among the finest grand tourers present in the world today.