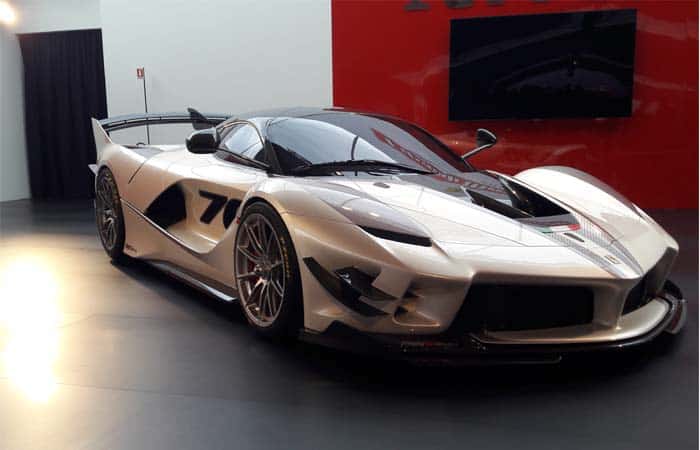 Sometimes the thunderstorm grows stronger and becomes more terrifying. On the other hand, when a Bella is dressed in the charm she looks the most adorable. Well, what if the Ferrari FXX-K gains more power? Certainly, it becomes the Ferrari FXX-K Evo.

Well, the FXX-K Evo features the similar technology and the almost the same design. But the present differences makes the Evo more powerful than the standard FXX-K. Well, she has been run over various roads and tracks to prove her abilities. And everywhere she rocked the floor.

The FXX-K Evo rattled the Daytona and various other tracks. Further, the Evo is mainly a track variant FXX-K. But along with that, she is a street-legal vehicle. Well, the pricing is a secret and there are only the hunches available for that. Precisely, the FXX-K Evo is priced more than $3 Million.

Some decent marketing and promotion were done for the Evo. She became the fame idol just within days of its instruction. And the competition is certainly not a problem for her. Well, the FXX-K Evo has everything to offer. Though she is just an improved version of the standard FXX-K. But she has a lot of fun in her every nook and cranny.

Well, now let’s explore the Ferrari FXX-K Evo and see what she is capable of.

See Also: How Often Should You Get a Wheel Alignment

The Ferrari has used the F140 engine in more than 10 cars. And the renowned ones are the FXX-K, the 812 Superfast, and the GTC4Lusso. Well, the FXX-K Evo even uses the same engine in its drivetrain. But she is among those Ferraris that are utilizing the hybrid powertrain. The Evo gets the same 6.3 L V12 engine that is installed in the parent edition of this series.

Besides the F140 V12 engine, the FXX-K Evo gets the Kinetic Engine Recovery System (KERS). This is the hybrid tech that this car is utilizing as the power substitute. The definition of the hybrid technology in supercars is a lot different than the conventional daily rides. These are not meant for saving fuel or putting up with the budget-cutting mileage. But these are the performance increasing systems. The KERS adds up to 187 hp of power to the complete system.

Not to forget, the power rating of the Ferrari FXX-K Evo is totally 1036 hp of power with 664 lb-ft of torque.

Well, the KERS is the Formula 1 experiment. In the FXX-K Evo, it is taking care of almost every important department of the performance. Like the handling in Evo is quite agile because of the electrical thump it gets from the KERS. Then the PCU and the MGU flow the mechanism of boosting the torque routes. And the brakes get a manager to control their behavior. That is how the Evo gets the electronic brake force distribution. Well, the engine is the priority of the KERS.

As like the elder FXX-K, the Evo even comes mated with the 7-speed dual clutch automatic transmission with paddle-shifts. And we do not have any issue with that.

See Also: How Often Should You Change Your Oil

The first appearance of the Evo made us feel like we saw the FXX-K. And we thought that the Ferrari just wrote the 70 on the doors and brought it out. But when we went in we learned that there is a pretty cool improvement in the design. Although the cosmetics are quite same. While the aerodynamics have decently increased.

The Evo is sharper than the standard FXX-K. The performance might not tell that. But the wind tunnel can actually elaborate that how easy is to handle the Evo. Especially the rear is helping a lot in keeping a good downforce on the car. And not to forget, the FXX-K Evo has the finest aerodynamics in any Ferrari born till now.

And definitely, the Ferrari FXX-K Evo is one of the sexiest cars alive today. It is just like her elder sister!

See Also: How Often Should I Get a Tune Up

There are certainly no changes in the interior setup of the FXX-K and the Evo. The seats are same. It has the similar sporty environment. And the cosmetics are even pretty much same. But the best thing we got here is the Formula 1 design steering wheel. It is an ergonomic steering wheel with the KERS control and the transmission paddles. You would not feel stiff while shifting or composing the KERS.

And that is the only difference you can get here.

See Also: How Long Does a Car Battery Last

In the features column, we get the 6.5-inch driver’s cluster display. The screen is a bit larger than what is in the standard FXX-K. Besides being a multimedia system, this is a performance analytic display. It shows the telemetry data, car status, and the performance sheets. Further, the navigation, Bluetooth, climate control and the audio system are readily available in this car.

The Ferrari FXX-K Evo has been prepared to tackle every safety problem at high and slow speeds. The occupant safety is fine in this car. And especially the rollover risk is certainly impossible because of its low riding ability. Further, the active safety includes various assistive features. Such as the traction and stability control, the ABS and the electronic braking assistance. The prominent driving assistive aids include the rear view camera that helps while parking the ride.

The Lamborghini Centenario is the closest competitor of the Ferrari FXX-K Evo. Well, she is even the competitor for the standard FXX-K. But here she losses more because of the steady aerodynamic skills of the Evo.

And nevertheless, you want an ideal race harnessing car, then go for the Ferrari FXX-K Evo. She can do everything to kill the waves.