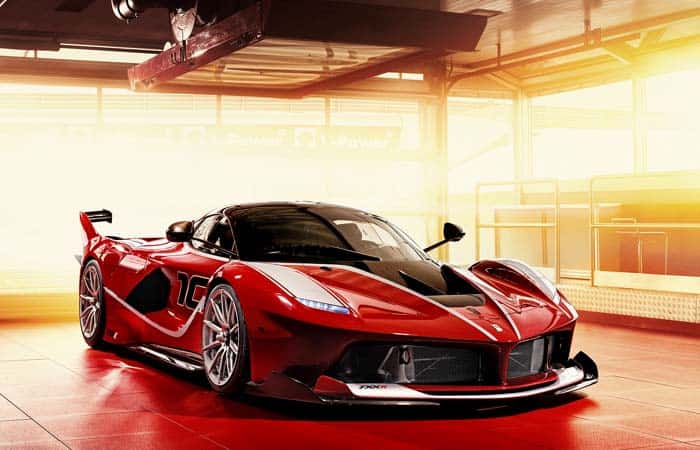 You need a pair of wings and some feathers, and you are all set to fly. Well, this is what the supercars could do nowadays. Just fill up this aeronautic requisition and you will get a car that could fly. These super beasts are capable of doing anything.

Such examples are mainly set by the European car makers. It would not be wrong to say that the Europeans were the airplane manufacturers before the breakout of the World War-II. But as soon as it ended, these manufacturers tended up to create something that could fly on earth. An airplane needs something like 180 or 190 mph for taking off. And these cars can make more than 200 mph. So just simply bring in the wings and feathers, and you would not require an airplane to move from Dallas to San Francisco.

Ferrari leashed the FXX in 2007. That was a limited edition car and only 38 units of it were produced. After 8 years Ferrari introduced the FXX-K as the successor of the FXX. And as like FXX, only 40 units of the FXX-K are produced. Once they are done, the FXX-K is done.

Ferrari could have launched the FXX-K shortly after discontinuing the FXX. But instead of introducing a standard gasoline based hypercar, Ferrari did some research to bring in a new tech. And that is what took FXX-K to come out.

The FXX-K is the second ever hypercar to use gasoline as well as electricity to run. The first to be launched was the LaFerrari. Well, the K in the FXX-K represents the KERS system brought down from the LaFerrari. The FXX-K is sold for as low as $3 million. It is 200 grand more than the last year price.

The FXX-K is powered by a 6.3 L V12 engine and an electric motor. The V12 alone gives 848 hp of power to this car. While the electric motor adds 187 hp of more power to the performance. The total output of the FXX-K is 1036 hp of power. That is immensely wild. Indeed, this is what a real hypercar is. Well, the whole system has more than 664 lb-ft of torque. This hyper-technology is matted with a 7-speed dual clutch automatic transmission.

Well, what do you think that how fast the Ferrari FXX-K could go? In our tests, we first drove it gently to test her patience. She was utterly sweet and glorious. Then we gave her a quick bang. She roared and sprinted like an Olympic athlete. But that is not the end.

We gave her a slight dose of rev, propelled the clutch, and there she goes. She launched from 0-62 mph in 2.4 seconds. Well, the odds say that it takes 2.8 seconds. But the reality is different. Then was the time to check her capabilities. We rode her over the proving grounds to check her total speed. And she ranked her best at 217 mph. That was certainly mind-blowing.

As like the performance, the handling is even quite sweet. You give her a stable dose, and she will give you the traction. You make her wild, she will you high.

See Also: All You Need to Know about Driveless Cars

The Ferrari FXX-K has been designed for the tracks. The design incorporates a drastic aerodynamic application. The front has been designed to cut the wind for maximum speed and acceleration. Further, the frontal hood offers maximum downforce to the car to ensure a better drag coefficient. Along with that, it brings in the air for the V12 monstrous engine to keep it cool.

The rear gets the wing type spoilers. That is certainly an innovation for the production cars. It provides more downforce to a car than the standard designs. Well, how could that be when it is just a right-angled pole of each side? Its design tends the air down on the car to enhance the downforce. And that could be experienced while driving FXX-K at more than 150 mph.

Well, it is time to get inside the Ferrari FXX-K. Once you sway the doors up, you meet premium ingredients for the interior. Ducked sports seats are standard. Well, once you get in, you would feel like you have stepped into the cockpit of an airplane. The outside view looks quite panoramic.

Certainly, it has everything for the track driving. It has passion, enthusiasm, joy, and pleasure. Particularly it is more than just comfortable ride.

The Ferrari FXX-K features an infotainment system for the music play, navigation, and the cars stats. Further, telephony is available for this car. Well, if you need to know about the weather or the traffic conditions, the FXX-K could tell you. And the audio system is quite soothing.

Well, these are the only entertainment specs available. While the performance of this car is itself quite entertaining that you do not need anything more.

Safety is the foremost concept of driving. The Ferrari FXX-K has ample amount of passive and active safety features. Like it has sufficient amount of airbags, the seatbelts are fine and the restraints are good enough for the head. The cruise control, traction management, and stability controls are available for this car.

Well, if you need something more than make sure your driving skills are almost perfect before stepping into this car.

There are a lot of V12 cars available to challenge the FXX-K. But we picked the McLaren P1 GTR. The GTR comes with a V8 engine. But it is almost as powerful as the Ferrari FXX-K. In addition to that, it has a friendly and useful tech available in the car. And it costs lower than the Ferrari.

The FXX-K is indeed a class apart. It does not need any competition or challenge to define it skills. It just needs the art of driving and a long road.